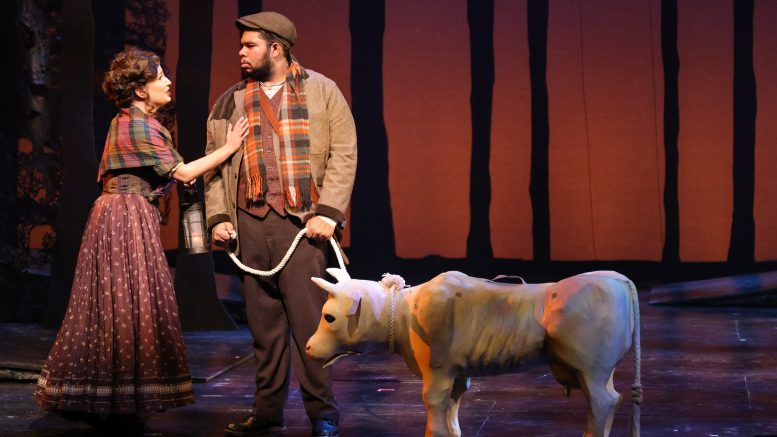 One of Broadway legend Stephen Sondheim’s most popular and enduring works is also one of his silliest on paper. The fairy tale mashup musical Into the Woods saw the trail-blazing composer and lyricist looking far to the past, to the stories of the Brothers Grimm and other fairy tales, pulling characters from “Rapunzel,” “Little Red Riding Hood,” “Cinderella” and “Jack and the Beanstalk.”

But the end result is far from childish or derivative — Sondheim and book writer James Lapine wove a personal, wholly original take on the tales, imbuing them with new depth, ambiguity and an expansive view of the eternally relevant themes present in the stories.

For musical fans itching for a serving of this Sondheim classic, the Royal Manitoba Theatre Centre (Royal MTC) is currently putting on a spectacularly realized production as its first musical since 2020. The production also happens to feature a recent Desautels faculty of music alum, Sarah Luby, in the role of Rapunzel.

Speaking to the Manitoban, Luby said that Sondheim has long been a favourite composer of hers.

Since studying at the U of M under the continued tutelage of her long-time vocal instructor Donna Fletcher, Luby has featured in television, film and theatre roles, and took part in a mentorship program through the Royal MTC which changed the course of her career.

“That really was a turning point I felt in my career, and helped me learn a lot about myself and what I’m interested in as an artist, including art for social change and disability, [and] advocacy through art,” she explained.

Luby, who has type one diabetes and undifferentiated connective tissue disease, has done advocacy work for people in the arts with similarly “invisible” disabilities.

In taking on the role of Rapunzel, she wanted to avoid the shallow trappings that some performances fall into, looking deeper into the character’s motivations and life history.

“She is truly a child at heart who has been locked away her whole life, and is dealing with Stockholm syndrome with her mom,” Luby elaborated.

Strained generational relationships and the personal struggles that stem from them are a major theme in Into the Woods, making up the bulk of its emotional weight.

We follow the Baker, played here by the endearingly sincere Jawon Mapp, and his wife, played by the remarkably spirited and charming Jade Repeta. They long to have a child, but their neighbour, the Witch, put a curse on their home that makes them infertile. To lift the curse, they have to collect items from each of the fairy tale characters around them.

Jennifer Lyon in the role of the Witch provided another stellar performance, with her work in witch-mode having a Danny DeVito-adjacent goblin energy, and her post-transformation performance shimmering with calm elegance and casual cruelty.

Things go as you might expect in the first act, though each of the familiar Grimm stories is injected with subtle boosts of pathos and a simultaneous, very funny ironic distance. The Princes Charming in particular offer lots of laughs, bounding about the stage and pouting at their misfortunes in love.

But the second half turns the stories on their head dramatically, and is shockingly moving and resonant for what one might assume is a light play based on children’s stories. Sifting through the aftermath of the fairy tale endings, the show explores grief, loss, cycles of abuse and the struggle of defining oneself away from familiar surroundings.

The Royal MTC production of Into the Woods is a real triumph and an excellent return to musicals for the centre. The performances are uniformly excellent, the set design is charming and suitably fantastical and the play itself is rightfully a classic.

Into the Woods runs at the Royal MTC until Feb. 4. For tickets and further information, visit royalmtc.ca.

So you wanna press your record? Things to know before you do