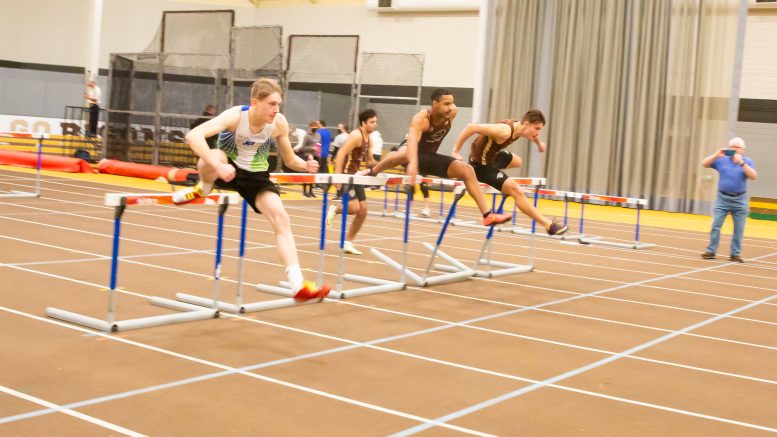 The Bisons track and field team competed in the annual George Tanner Memorial Classic this past Saturday, held on home turf.

With the Bisons men’s track and field squad dominating the CanWest ranking — currently sitting in first place this early in the season — it will be interesting to see how the men will step up to maintain their place, especially with the Saskatchewan Huskies nipping at the Bisons heels, just nine points behind the herd.

This is a great start to the season, as the U of M men ended up tying the University of Alberta for fourth place last year in the U Sports rankings. It goes without question that this year, the team is looking for a first-place finish.

The meet was also good for the Bisons women’s track and field squad, with rookie Signy McKim ranking fourth in the CanWest women’s high jump standings after this year’s annual meet, clearing a height of 1.60 metres.

Another great performance was had by fellow rookie Natalie Fournier, who ran the 1,000-metre in a time of 3:37.10, placing fourth in the CanWest standings.

With this year’s rookies being so strong and placing high in the rankings, the team shouldn’t have to worry too much about points.

A fantastic team effort within the herd’s squad was performed by the entirety of the women’s shot put group, who finished the day with Erica Udoh placing first, Alainna Melnyk placing second, Janai Smith placing third and Paige Newcomb placing fourth, giving Manitoba a sweep from first to fourth place in the CanWest rankings.

The women’s CanWest rankings were slightly lower than the men’s portion of the team, with the women ranking fifth after this competition behind the University of Regina.

At the end of last year’s track and field season, the women ranked outside of the top ten in the U Sports rankings. They are undoubtedly hoping to place within the top ten this season.

Going into the holiday season the team is looking strong. With minimal meets under the team’s belt so far, it will be fun to see how they will compete coming out of the holiday break.

The herd’s final event of 2022 will again be on home turf this Dec. 9 to 10, as they compete in the Athletics Manitoba Last Chance, hosted in the James Daly Fieldhouse at Max Bell Centre.

U of M swim and track stars show strong through summer