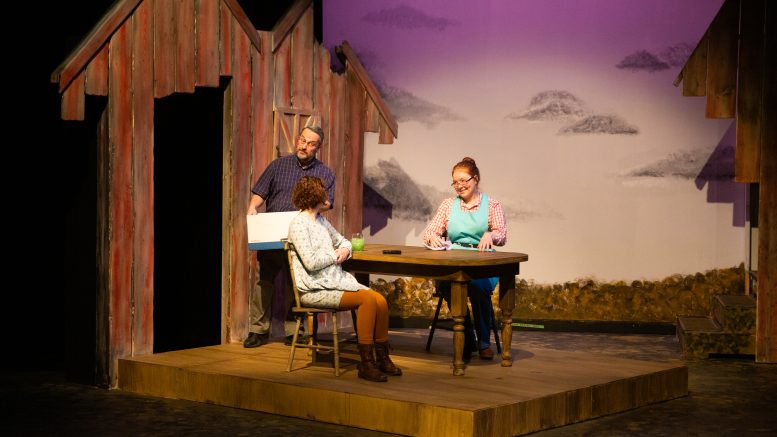 The U of M department of English, theatre, film & media’s (ETFM) theatre program returns with their first stage production since the spring of 2020 — Seeds by Annabel Soutar.

Directed by ETFM assistant professor Katrina Dunn, Seeds follows a playwright who is unnamed throughout the play, on a mission to refashion interviews into material for the stage. Her chosen subject is Saskatchewan farmer Percy Schmeiser, who is being hit with lawsuits by biotech agri-behemoth, Monsanto.

Based on a real court battle, the play poses questions about the ethics of rapid scientific development as it is outsourced to agribusiness and multinational fiefdoms carved out with antiquated patent laws.

The show is a multi-media dramedy of jarring set-pieces which, overall, pull together seamlessly. Cinematic location titles projected on the back wall, silly music to punctuate a joke  and a hard-working lighting crew create an intriguing atmosphere.

The rustic, pastoral set has a few Easter eggs. Audience members with a keen eye will spot a certain book by Naomi Klein tucked into a nook.

Allison Holiday pulls off the heartfelt but at times damagingly one-track-minded  playwright. Bill Kerr is exceedingly convincing as the salt-of-the-earth and homely Percy Schmeiser. Nadine Maranan stands out as the oily lawyer Terry Zakreshi.

These successes extend to all members of the supporting cast. Everyone’s performances are energetic. Each cast member successfully shifts between multiple characters throughout the show and makes those alternate personae distinct, which is no small task.

This return to a live format is replenishing and fun. The play revives the rich history of student theatre at the U of M while exposing audiences to the medium’s possibilities.

Dunn told the Manitoban that Seeds was born from a desire to introduce audiences and students to a different form of theatre. This production is a verbatim play — a genre of play that is documentary in nature, with dialogue taken from a collection of interviews, court transcripts and press recordings. Everything is word for word.

Directing a production post-online learning has not been without complications  and producing Seeds has not been a simple task.

“Through the pandemic, the university gave us permission to do some of our classes in person, but that was only a portion of their training,” Dunn explained. “Students had a lot of Zoom classes and things, and a lot less opportunity to experience hands-on physical productions.”

“So, for some of our students, even if they’re in second or third year, they’ve never worked on a ‘show’ show before, but they’ve been learning theatre.”

While full-production shows are making a return, there has been discussion within the university’s theatre department on how they are meant to look and run post-pandemic.

Dunn said that the decision to offer free admission was a “logistic” one — the mechanisms previously in place to set up a box office and sell tickets were lost to the pandemic. Whether the disruption will become a permanent change is still up for discussion among U of M theatre staff.

“I think it’s a question for us in the theatre program, as we kind of look at going forward, whether payment for shows will come back or not,” she said. “While paid admission has been the history at the university, it could be the next change for the theatre post-pandemic.

Dunn hopes viewers walk away with a new perspective on where their food comes from and an appreciation for the hard work of artists adjusting to a new theatre world after COVID-19 shutdowns.

“It is political theatre,” she said. “As with any political theory, you hope people come away discussing things. I don’t want people to shy away from the show just because they think they don’t maybe have the same opinions as what [they think] the show’s statement is, because this style of theatre shows all different sides.”