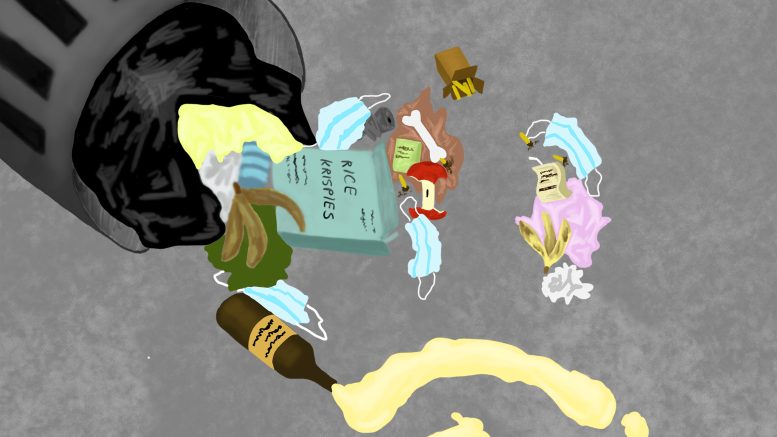 As we move further into November, I still find myself thinking of summer. I think back to
the heat, the feeling of relaxation and, most importantly, no school.

Lately, there’s another thing that I’ve thinking about — my summer jobs.

Most students have worked a job during the summer. Whether you worked as a camp
counsellor or in an office, you probably have some good memories of your summer job. You
might even have parents who, before the summer even began, told you that your job would
“make you memories that last a lifetime!”

This past summer, I had two jobs that left lasting impressions on me.

One of these jobs was at The Forks, where I worked at a shop called Planet Pantry.
There, I helped customers fill jars with our bulk products and educated them on how they
could be more sustainable in their everyday lives.

Yes, I made great memories, but I also learned about the harsh impacts of climate
change, and how we as a society aren’t doing enough to fight against it.
I also worked as a landscaper and garbage remover for KD Landscaping. Every day, I
went to work at or before 5 a.m., where I picked up garbage, watered flowers and
occasionally mowed grass. I loved my job, and I took pride in making things look beautiful
and neat.

However, picking up garbage almost every day made me sick and tired of litter. Before
work, I would pray that there wouldn’t be any garbage to clean up that day. Sadly, this was
never the case.

In every neighbourhood we went to, there was all sorts of garbage lying around, like
ripped up papers and fast food packaging to paper cups and scraps of metal. Multiple people
littered right in front of me, throwing wrappers on the ground knowing that I would pick them
up. Even the flowers I watered every day were sometimes torn out and thrown on the
ground.

I picked up every cigarette butt and every tiny piece of plastic, knowing that later in the day
the ground would be dirty once again. Although I was disgusted by the litter I gathered every
day, I found the work rewarding and I was dedicated to making the properties we cleaned
litter-free.

All summer, garbage haunted me, and it became my mission during and outside of work to
pick up litter. I felt bad, not only for the Earth riddled with garbage, but also for the workers
like myself who cleaned up trash every day. A part of me hoped that if I picked up garbage in
public, maybe others would follow my example.

Eventually the summer came to an end and I began to look forward to going to university
in-person, where I thought I wouldn’t have to constantly pick up trash. I thought the university
would be clean. After all, decent university folks don’t litter!

Boy was I wrong.

I have no idea what campus looked like pre-pandemic, but this year I see garbage
everywhere.

I get off the bus to see masks blowing in the wind and papers crumpled on the ground. I
step in cigarettes and banana peels as I make my way to University Centre.

People even litter inside. I leave at the end of the day and food is left out on tables, with
receipts from the cafeteria scattered on the floor.

I thought I could take a break from picking up litter, but I find myself trying to pick up
garbage at school, even if I have no time.

Before, I used to brag that my generation doesn’t litter, but I can’t say that anymore. Have
we gotten to the point where we just don’t care?

I know what it feels like to pick up garbage for a living. It can be exhausting and tedious.
Even though workers get paid to clean, we shouldn’t be throwing our garbage on the ground
just because it’s someone’s job to pick it up. I feel for the staff that have to do this every day,
and I know it never gets better.

The University of Manitoba has multiple sustainability strategies in place to help reduce
our impact on the environment, but it is also up to us to help keep our campus and rest of
the city sustainable and clean.

So, if you’re reading this, please don’t litter. Don’t rely on staff or other people to clean up your
mess. If one garbage can is full, go to another one. If your peers litter, tell them to pick up after
themselves. It is so simple and easy to avoid littering, and if we work together we can combat this
issue.

The end is nigh