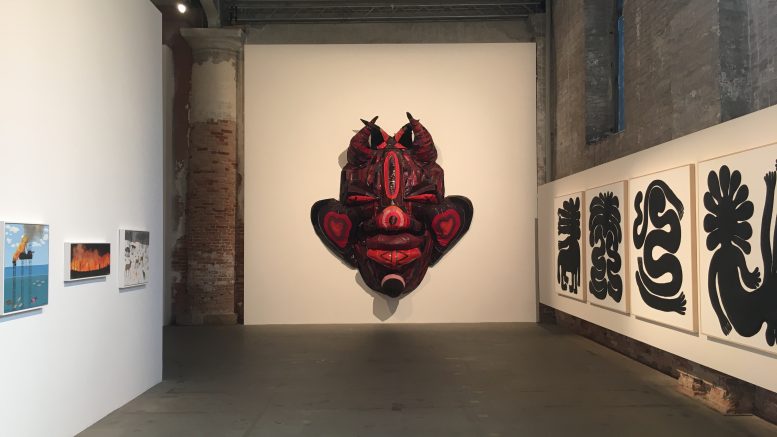 The Venice Biennale a place for art lovers from all over the world to congregate and see an incredibly diverse range of art.

Several Canadian artists are displayed this year in the main exhibition, The Milk of Dreams. Taking its name from the title of a children’s book written by surrealist artist Leonora Carrington, the exhibition focuses on artwork that often reimagines the world we live in.

The Canada Pavilion at the Venice Biennale also examines the world through four photographs by Stan Douglas, which recreate pivotal moments from riots that happened around the world in 2011.

The images blur the line between fiction and reality, forcing the viewer to question the information that’s fed to them in the news. Titled 2011 ≠ 1848, it draws parallels and contrasts to the revolutions of 1848 against European monarchies, beginning in Sicily and spreading throughout the Austrian Empire, Germany and France.

The riots from 2011 included in this exhibition are presented chronologically. The first broke out in January in Tunis, Tunisia marking the start of the Arab Spring.

In June of 2011, comparatively frivolous riots filled the streets of Vancouver, B.C. after the Vancouver Canucks hockey team lost to the Boston Bruins in the Stanley Cup finals.

In August of the same year, riots broke out in London, England following the police shooting of Mark Duggan, an unarmed black man in north London.

And in the following October, protesters involved in New York City’s Occupy Wall Street, a movement that protested corruption on Wall Street, were trapped and arrested on the Brooklyn Bridge.

2011 ≠ 1848 is complemented by the other half of Douglas’s exhibit titled ISDN, a two-channel video on an offsite location at the Magazzino del Sale. One screen shows musicians TrueMendous and Lady Sanity, and the other Yousef Joker and Raptor. These artists represent the grime and Mahraganat genres respectively, which are often associated with youthful revolt.

The two screens face each other as though the musicians are in conversation, with viewers watching in the middle. Continuing with the themes of 2011 ≠ 1848, then, ISDN presents the frustrations of the current social and political norms, and the musicians’ drive to make a change.

2011 ≠ 1848 will also be available for viewing throughout Canada, where it is currently on display at the Polygon Gallery in Vancouver until Nov. 6. The exhibition will then travel to Saskatoon, Sask. and Ottawa, Ont.

Fan, an artist from Ontario who is currently based between Brooklyn, N.Y. and Hong Kong, created sculptures that simultaneously look paleolithic and futuristic. Fan frequently injects melanin, testosterone, estrogen and even his own mother’s urine into handblown glass. By mixing art and science together, he highlights the connection between identity and biology.

Fan’s sculptures included in The Milk of Dreams — “Wounding,” “Apparatus” and “Fragrant Harbour” — contain prolactin, the hormone that lets people with breasts produce milk, communicating the interiority of the body and the changes it goes through to feed a newborn child.

“Divine Giants Tribunal” is comprised of three monumental masks by Lewis, a New York-based artist originally from Ontario. Each mask measures three meters tall. These show-stopping creations are made from found materials that have been handsewn as a study of women’s labour.

Kiwanga, a Paris-based artist from Ontario, created an architectural colour gradient in her work “Terrarium.” Interspersed throughout the space are sculptures created from glass and sand. Kiwanga considers sand to be a political material due to its association with oil extraction, as well as a reminder of the potential for an arid planet due to climate change.

While it is an examination of colonial power systems, “Terrarium” also provides a tranquil section of the exhibition for viewers to relax and rest their eyes, acting as a much-needed place to breathe among a building packed with art.

The Biennale exhibits an incredible range of artists with diverse areas of focus. The works are united by their examination of the world we live in, both politically and culturally. This year, Douglas took a global approach to the Canada Pavilion that questioned the reality of media, just as The Milk of Dreams examines reality through a dream-like gaze.