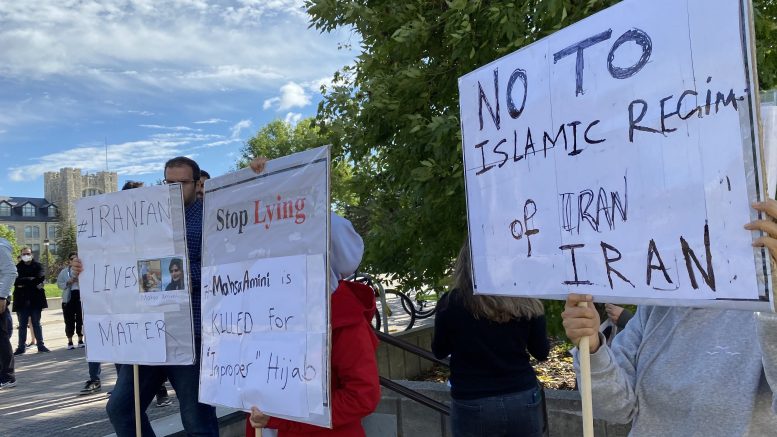 The University of Manitoba has extended the fall fee deadline for international students from Iran, as the Iranian government has been shutting down internet connections throughout the country in response to the protests. These blackouts have made it difficult for students to contact their families and access financial support.

“When we find students in a crisis, for example what our Iranian students are going through right now, the university always looks at ways to sort of ease the financial distress at the moment,” said Jane Lastra, associate registrar and director of financial aid and awards at the U of M, “and right now, of course, that’s the fall tuition deadline.”

“We all thought it was important and manageable to extend the fee deadline to allow the time for students to transfer the funds from back home if that was the case during the blackouts that are being experienced.”

An Iranian U of M student who asked to remain anonymous in order to avoid scrutiny from the regime said that they “really appreciate this extension on the deadline of the tuition fee,” but hoped the university could do more.

They said that they personally have had difficulty contacting their family due to internet censorship.

A number of students at Sharif University of Technology in Tehran, Iran were arrested and injured by police Sunday, Oct. 2 amid protests over the death of 22-year-old Iranian woman Mahsa Amini.

The protests at Sharif University are part of a more than two-week-long wave of demonstrations across Iran after Amini died in police custody.

Amini was arrested in Tehran on Sept. 13 by Iran’s morality police, who accused her of violating laws requiring women to wear a headscarf and loose-fitting clothes.

Witnesses said she was beaten while being transported to a detention centre. She fell into a coma and died in hospital on Sept. 16.

The Iranian police denied the allegations that they beat Amini, and said that she died due to heart failure, which Iran’s interior minister claimed was caused by pre-existing health issues.

Her father, however, told news outlets that Amini had no serious health problems, and that she had bruises on her legs.

Demonstrations in reaction to Amini’s death began in her hometown of Saqqez on Sept. 17 and have continued in more than 45 cities throughout the country.

The unnamed Iranian student said that “the most important thing that they are demonstrating for is freedom.”

“In the previous protests a few years ago, we were seeing that the most primary [demands] of people were economic problems that they were facing,” they said.

“But right now in this protest, which is very important to notice, is that they are demanding their freedom and the most basic human rights.”

The crackdown at Sharif University was triggered by students staging a walkout and chanting anti-regime slogans.

As hundreds of protestors gathered on campus and streets nearby, videos posted to Twitter showed riot police using tear gas on students, with what appeared to be gunshots audible in the distance.

While riot police eventually cleared the Sharif University campus, protestors filled the streets until after midnight.

“These are the most prestigious universities in Iran [and] it is not easy to get into [them],” they explained. “So killing and attacking these students[…],it’s like in Canada [if] police forces attacked students in Toronto.”

Sharif University was one of numerous universities in Iran where protests broke out on Oct. 2 , including schools in cities like Yazd, Mashhad, Shiraz, Kermanshah and Sanandaj.

Lastra said that the decision to extend the deadline comes from the office of the vice- provost, which alongside UMSU and the University of Manitoba Graduate Students’ Association has worked to provide students with information on what financial supports are available and how to access them.

She also highlighted additional bursaries currently offered by the university, and said that students are welcome to come to the financial aid and awards office to discuss their financial concerns “face to face.”