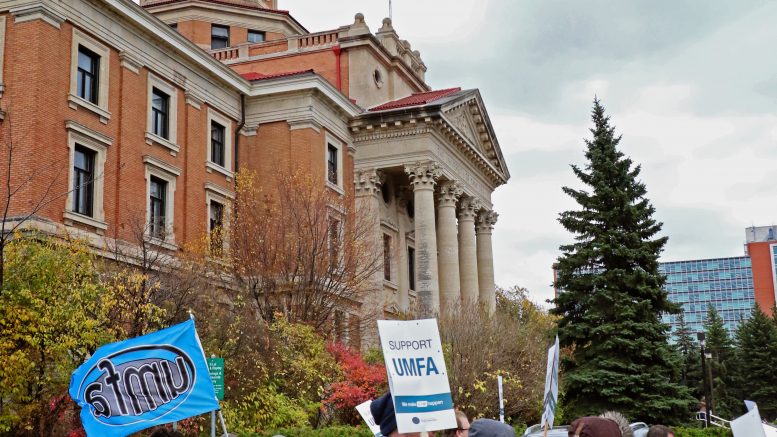 As a third year student, only one aspect of university life concerns me: the quality of education.

The budget cuts of the 2015-2016 year have had a negative impact on the quality of education. It is increasingly difficult to schedule time to speak privately with my professors, as they are not only consumed by their increased workload.

UMFA claims to be negotiating in the interests of staff and students against the obstacles of administrative budget cuts. But what exactly are the interests that students value most at the U of M? And who represents the common student? The University of Manitoba Students’ Union (UMSU) has provided little information to students regarding the cuts and UMFA’s initiatives. Where is our student union in all of this? If they are not actively putting forward our cause, then where is our money going? These were the questions marinating in my mind on the way to the Oct. 21 UMFA information picket.

Absent at the information picket, it appears UMSU has been failing to actively insert itself in the debate, waiting for further information before addressing the student population. This embodies the lack of relationship between faculty and students and further suggests UMFA and UMSU have been failing to properly communicate with each other.

The majority of the crowd at the picket was not students. The student reaction (other than a minority which marched with UMFA) was primarily to watch from the sidelines and snap a few photos. Do students not care about the future of their education at the U of M? Or have they been denied an honest account of how administration has reacted in response to UMFA?

It can be argued that the students’ lack of interest can be attributed to a biased account of the struggle presented in the media. Media outlets have so far broken down the struggle to a matter of UMFA’s desire for a wage increase. The result of this is that student-faculty unity has been factionalized. By emphasizing wage negotiations in their coverage, the media has unwillingly or not painted UMFA as selfish.

The megaphone declared that UMFA wishes to “restore the relationship between faculty and students.” But this is increasingly difficult in the climate of organizing a strike. The lack of successful negotiation between UMFA and the administration has left the students in the dark as to what they should expect. While UMFA praises students demonstrating on their behalf, the fight against budget cuts exemplifies a further factionalized campus. There is a lack of common values among students, and if the deteriorating quality of our education cannot unify students, we will be the ones to suffer.

I have had enough with wages, ad campaigns, arguments about infrastructure, and bent truths. There is only one consensual conclusion from UMFA and student reactions to the budget cuts. The University of Manitoba needs more transparency.

I do not claim to represent U of M student values. Students’ values are a complicated matter (as are UMFA members’) and representing them accurately is a difficult task. But that is beside the point. Will UMFA’s rallying call to “restore the relationship between faculty and students” stimulate student mobilization? Or will our opportunity be lost by cause of mainstream media framing? By any account, students and our union need to step up to the challenge.

Clowns to the left of me, jokers to the right

Two confirmed cases of COVID-19 on U of M campuses