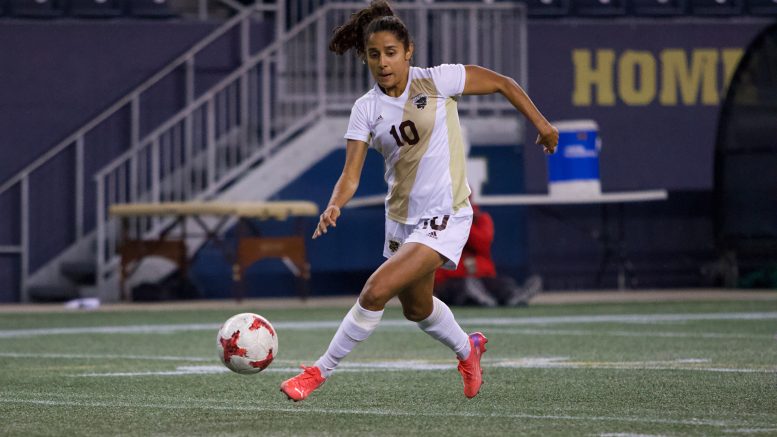 Unfortunately for the Bisons, the Cougars would spoil the historic night with a 2-1 victory — a heartbreaking finish to an exciting season for the Bisons.

The game started out with no outstanding or notable plays made by either side, but the yellow cards started coming within the opening minutes

In the 19th minute of the game, Regina nearly scored off of a free kick header from forward Grace Miller, but was denied by Bison goalkeeper Karina Bagi. At this point, the game remained scoreless.

That was until 34 minutes into the game, just seven minutes after the Bisons’ second yellow card, when Bison forward Jenna Kunkel netted one in the top-right corner to give the Bisons an early 1-0 lead in the all-important game.

Things were all Bisons to begin the second half. There were four fouls on Regina, and while the Cougars managed to get in three shots, one was wide and the others were saved by Bagi.

However, things would take a turn for the worse when in the 65th minute, Regina was awarded a penalty shot. The Cougars used this golden opportunity to their advantage when Regina forward Peyton Enns tied the game up, swinging the momentum in favour of the Cougars.

Frustrated with what just happened, Bagi received a yellow card, which made the game more intense.

Neither side was able to get another shot in the net even as regulation time expired. Both sides were at each others throats, vying for a chance to score and take the game for themselves.

Disaster struck in stoppage time when Regina’s Makenna Sackmann scored her second goal of the year to give the Cougars the lead, ultimately winning them the game and breaking the Bisons hearts.

Bagi was deservingly named the game’s MVP for the Bisons.

When asked to describe the team in one word, Bagi replied “grit.”

She explained that the team faced a lot of adversity this season, citing games, like the season opener, which was rescheduled and then delayed. She added that in the playoff game against Regina, the team sorely missed forward Bianca Cavalcanti — high praise from the MVP.

“We just became reactive rather than proactive,” she said.

She later went on to say that “the development of the athletes is first.”

This was an incredible season for the Bisons that simply did not go their way.