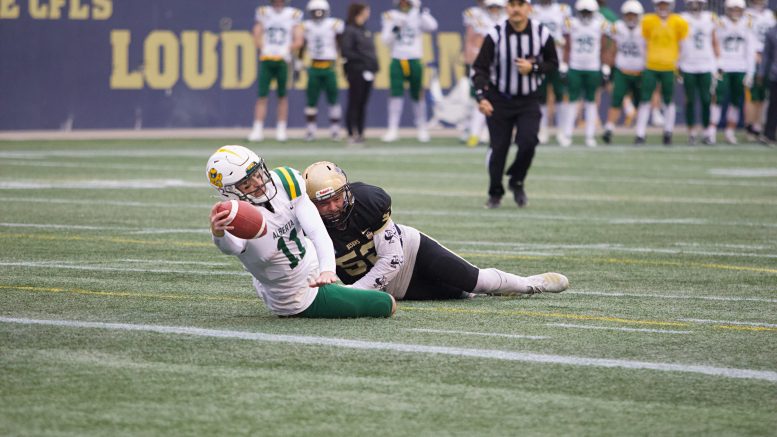 The Bisons started off the first quarter of Saturday’s game strong, jumping ahead early.

Just over five minutes into the first quarter, Bison quarterback Des Catellier found receiver Braeden Smith in the end zone for a 12-yard touchdown, capping off a three-play, 68-yard drive.

After the touchdown, Manitoba’s defence quickly got the ball back to the offence by forcing a two-and-out on the Golden Bears. The herd capitalized on the defensive play with a Niko DiFonte 39-yard field goal.

Although the Bisons’ continued to rack up the points off an Alberta safety and a second DiFonte field goal, momentum noticeably dropped in the second quarter, with the Golden Bears scoring on two consecutive possessions to take the lead 20-15 going into halftime.

However, the herd came out blazing in the opening minutes of the third quarter, Catellier connecting on the first drive of the second half with receiver Brendt Adams in the end zone. This was followed by a three-yard touchdown pass from Catellier to running back Ishe Matanga.

Alberta’s lone points in the third came by way of a field goal in the dying minutes of the quarter, leaving Manitoba in the lead 29-23.

The final quarter turned into a slugfest. The Bisons and the Golden Bears exchanged touchdowns with the herd coming out on top.

Catellier’s third touchdown of the game was to receiver AK Gassama followed by a two-point conversion thrown to Adams.

Alberta answered with a touchdown of their own, but they would be well short of a comeback.

The Bisons would score their fourth touchdown of the game with running back Breydon Stubbs completing a two-yard rush into the end zone. Meanwhile, the Golden Bears would go on to throw two interceptions caught by Bison defensive backs Sebastien Reid and Marcel Arruda-Welch, respectively.

Manitoba would finish the beatdown over Alberta with a strip sack recovered by Bison defensive lineman Cole Adamson cementing the 44-30 Bisons victory.

The Bisons are currently sitting in the postseason position of fourth in the Canada West standings and can punch their ticket to the postseason with a win over the University of Regina Rams in the final game of the regular season on Oct. 29.

Last year’s final for the 2021 Hardy Cup ended in devastation for the herd, with a 45-17 loss to the University of Saskatchewan Huskies.

With the win over the Golden Bears, the herd is sure to be carrying the momentum into their upcoming game against the Rams for a chance at redemption in this year’s Hardy Cup.

Mau as humble and hungry as ever in 2017

A season of change