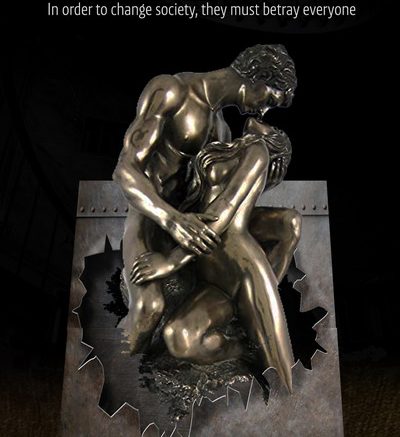 The writing in general is stunted, awkward and littered with grammatical mistakes. But surprisingly, it is still a rather smooth read — simplistic enough to take down in an afternoon and descriptive in a plain spoken, almost awkwardly direct way.

The novel supposedly draws on bits of Chapman’s life, with Greg seemingly being a self-insert character for Chapman. But, given how much Chapman flatters himself through his descriptions of Greg, I would take the realism with a grain of salt.

This autobiographical aspect does mean that U of M and Winnipeg landmarks are namedropped constantly. Much of Sin and Greg’s romance in the early chapters progresses in the Max Bell Centre. The two frequently hang out in the U of M campus bar of the time, Umzoo, or go out for drinks at the Yellow Dog Tavern in the exchange.

The romance between Sin and Greg is incredibly flimsy. Their conversation — like all dialogue in Why Not Sin — is cramped and robotic, and descriptions of their non-sexual outings and activities are kept to a minimum, but it is taken as a given that they are hopelessly and forever devoted to each other.

Largely, the characters’ romance is developed in the numerous graphic sex scenes, written with a leering, lumbering, slightly unsettling horniness. Imagining Chapman writing these explicit scenes from the perspective of an 18-year-old woman is a bit skin crawling.

But what these scenes lack in eroticism, they make up for in hilarity. All of them follow the same path, mostly involving vulgar displays of Greg’s ultimate sexual prowess as he shows Sin untold pleasures with grace and style, and each scene is described using a strange, distinctly unsexy diction.

Greg is presented as a sterling, unblemished genius in virtually all aspects of his life. His career in writing, beginning with his stint at the Manitoban — a job which the book notes made him very attractive to other students — is especially illustrious, culminating in a crazy meta-narrative in which his own autobiographical book titled “Why Not Love: Imagine if sex could actually heal the world” sells nearly 50 million copies and is adapted into a film that generates $687 million at the global box office.

Greg’s only flaw is his emotional demons, which are completely vague and seem to mostly manifest through his propensity to leave Sin at random and sleep with other women, and somehow even that habit endears him to Sin.

If it sounds like I am simply insulting and piling onto Why Not Sin, let me say that I had the time of my life reading this book. It is one of the most insane things I have ever read, and an absolute thrill ride through the psyche of a strange, egomaniacal, horned-up but ultimately sympathetic man. And as a student at the U of M, its hyper-specific setting really immersed me in the story. It isn’t a “good” book, but it is a great one.

Why Not Sin: In order to change society, they must betray everyone is available on amazon.ca.

Donna Besel — ‘The Unravelling: Incest and the Destruction of a Family’

Sarah Klassen — ‘The Tree of Life’

The art of science, the science of art