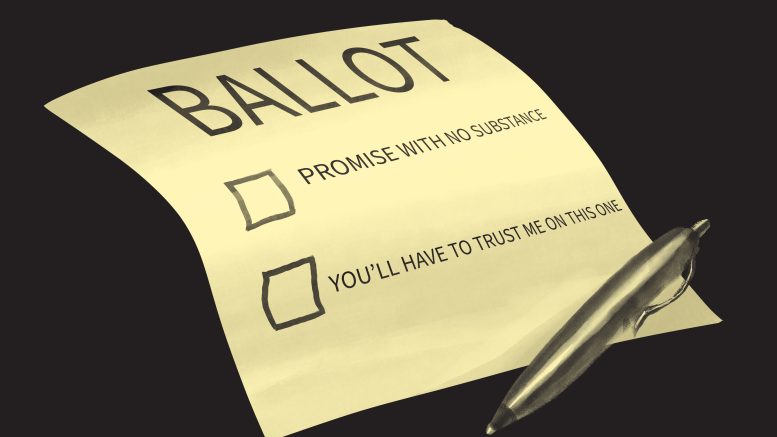 As the civic election heats up with the finalization of official candidates this past Tuesday, all levels of electoral races remain wanting.

When Winnipeggers go to the polls on Oct. 26, they will have a choice between nine candidates for mayor that are men, and only two candidates that are women. If we are to believe the Probe Research poll, the front runner is a candidate who resigned mid-term the last time he was mayor of Winnipeg to run as a member of parliament.

Most bleakly for voters, many candidates are borderline if not outright career politicians, with backgrounds ranging from failed civic and federal races to already poor political performances.

Worse yet, their campaign promises have been made without the existence of or proposals for infrastructure to back up their plans.

The mayoral race is uninspiring to the point of disillusionment.

And yet, the mayoral race isn’t the only disturbing category in this civic election. The race for councillors isn’t much better.

Even for the wards with competition, there are incumbent councillors who may as well be running unopposed as they have become such a part of the fabric of Winnipeg politics. Their runs are basically, to use a golf term, gimmes.

Moreover, Russ Wyatt, whose term as councillor of Transcona ran from 2002-2018 and who faced a sexual assault charge in 2018 that was stayed in 2019, has once again put his name down on this 2022 election ballot for a fifth term. In a recent interview he was unironically quoted as saying “I think we need a change.”

While Sharma — who’s running for her fourth consecutive term — made history in her first term as the first woman elected by city council to be speaker of the council, she was quoted recently expressing her disappointment in running unopposed, because competition in politics for a seat is “democracy in action.”

If the incumbent or most recognized name always wins, isn’t it undemocratic to not step aside and let other unknown candidates take over the job?

With these long haul councillors, then, is it not time for term limits to be introduced in Winnipeg civic politics?

On the subject of term limits, if elected, this will be Glen Murray’s third term as mayor, regardless of the fact that he quit halfway through his second term. This begs the question: should there be a two-term limit on all civic candidates?

The argument against term limits is often the “lame duck” opinion, meaning that if a politician knows they will not be able to run again, there is no guarantee that they will perform their duties in the second term of their elected tenure.

Is having an elected official in their fourth or fifth consecutive term, who is oftentimes elected simply for name recognition’s sake, any better? What if there is a better candidate than the incumbent, but with the downward spiral of democratic interest from the public in recent years, they are not elected?

I don’t believe democracy in action looks like a person vying for their second decade in the same civic seat they’ve always held.

All this being said, the school trustee part of the ballot should be making just as many headlines — now more than ever — as teachers continue to work through this pandemic.

It may just be that with the voter turnout last election being the lowest since 2006 at 42 per cent, and with the lack of inspiring candidates, that Winnipeg will hold the most apathetic civic election to date.