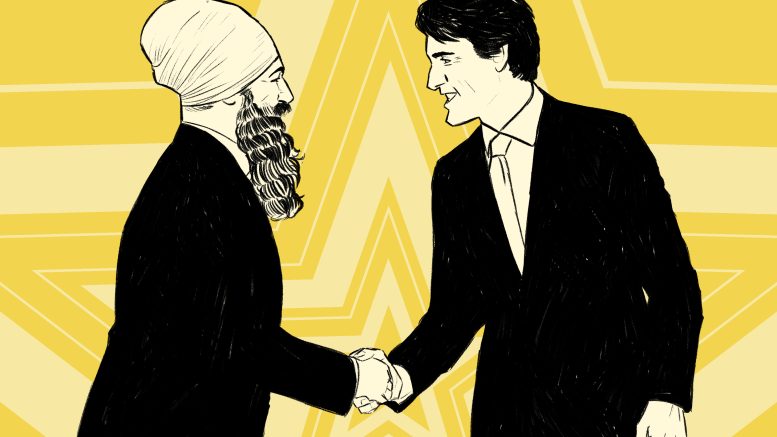 Collaboration can be hard to come by in politics, but the agreement reached between the Liberal party and the NewDemocratic Party (NDP) caucus proved to be an exception to the rule. The agreement seeks to extend the Liberals’ tenure until 2025 through NDP confidence votes, in exchange for big progressive policies like expanding universal health care to include dental care and pharmacare. If the NDP is able to deliver these promises with its newly acquired leverage, the party can solidify itself as the progressive option for voters and can  potentially improve its position in the coming election.

Considering the Liberal party was making a bid for a majority in the last election, it is no secret party members were not satisfied with its performance — the snap election produced a Parliament that is almost identical to the previous one.The disappointing results left Prime Minister Justin Trudeau on the tightrope.Pundits quickly used the disappointing results to speculate Trudeau could possibly step down from his leadership, claims he discredited. After shooting himself in the foot by spending $600 million on an election that was voraciously opposed by most parties and voters, it looked like Trudeau was bound to fail the next confidence vote. However, with the recent agreement,Trudeau has solidified his party’s position for years to come.

The agreement has led to considerable pushback from Conservative parliamentarians and NDP voters alike.

NDP pundits were quick to call out Jagmeet Singh for the disparity between the costs of supporting the Liberal government compared to the benefits of pushing through complex policy in such a short period of time. Further, this does not stop Trudeau from calling a snap election before 2025 if polling assures a majority. This may render Singh’s deal useless should his policy aspirations not be realized before that time.

Singh called on his supporters to reflect upon past and present adversities Canadians face and guaranteed the deal is meant to put citizens ahead of partisan politics. He reassured voters the NDP will continue to hold the Liberal government accountable while working alongside them to ensure dental care for children up to 12 will be realized by the end of this year and a universal pharmacare act drafted by the end of 2023. But professionals question the likelihood of this outcome.

Conservatives were quick to condemn the collaborative agreement. Interim party leader CandiceBergen suggested the agreement is a betrayal to the electorate, consideringCanadians did not vote for what she described as a “Liberal-NDP government.”However, Bergen is mistaken in her criticisms. In order for a coalition government to be installed, the NDP must have at least one cabinet minister aspart of the government, which is clearly not the case. The NDP and Liberals merely agreed upon collaborating to serve Canadians with progressive policies in order to find common ground and avoid another destabilizing election.Bergen’s comments prove Conservatives are simply unable to face their party’s own pitfalls and prefer to promote disinformation to infuriate their base.

The Liberal-NDP agreement is not solely a political victory, but rather a triumph for low-income Canadians who need assistance to cover their pharmaceutical necessities and require adequate and affordable dental-care plans. Though imperfect, this agreement puts citizens’ interests over partisanship. Moreover, it stabilizes Canada’s electoral system by guaranteeing the NDP’s confidence vote. If effective, this could open the door for a new era in Canadian politics, one defined by collaboration instead of combative quarreling.

The legacy of the fallen

None dare call it welfare

The man on the radio