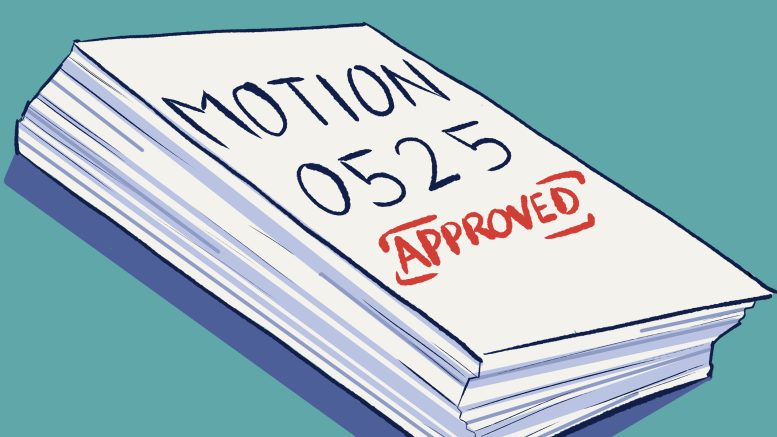 UMSU’s board of directors passed a motion at its Jan. 20 meeting reducing the number of voting members on the board from over 50 down to 28.

‍UMSU president Brendan Scott said this smaller board will be “easier to coordinate.”

‍“With a smaller board, students are actually represented now, because everyone has a chance to speak,” he said.

‍Scott said debate at meetings often “did not reflect how the board voted in the end because […] people were simply not speaking up” due to the length of meetings and number of others attempting to be heard.

‍“[We] give about five minutes of speaking time every time you get speaking rights,” he explained. “With [that many] people, simply put, you can’t have everyone share their opinions.

‍“The board meeting would go on for hours and, personally, [I think] our board wasn’t being represented properly […] we only heard from a select few.”

‍“To me, the way that we had it was more representative in some ways,” Rykiss said. “I think that if a faculty is exponentially larger than a different faculty […] having a certain amount of votes that reflects that […] makes sense.

‍“The board saw it slightly differently. They wanted to have fewer members to solve other concerns like attendance issues or making sure that everyone can be seen in the meetings.”

‍The motion is intended to make the board more efficient, based on recommendations in the Susan Rogers Leadership report completed in 2020.

‍Scott said a second round of review following the Susan Rogers report “emphasized [equity, diversity and inclusion] and the need for representation,” leading the board to conclude the eight to 12 representatives recommended by Susan Rogers was insufficient.

‍“That’s why we then [decided on] the 21-person board [which gives] every student representation on the board, as every single undergraduate student at the University of Manitoba would have a rep,” he said.

‍The board will be restructured to allow a representative from each of the university’s 21 faculties, along with seven community representatives, for a total of 28 voting members.

‍“The beauty of this motion is that the other councils don’t have to change their bylaws at all,” said Scott.

‍“So, for example, science can still elect four UMSU [representatives] but […] they have one vote and they can choose who holds that vote.”

‍Initially scheduled for Jan. 6, a vote on the motion was delayed following concerns raised about representation of marginalized communities.

‍The draft of the motion presented at that meeting would have required community representatives like the Black students’ representative to attend board of directors’ meetings but only grant them speaking rights.

‍Community representatives raised concerns that marginalized communities would not be adequately represented if their representatives were not permitted to vote and requested the amendment to reinstate their voting rights.

‍Rykiss thinks there is “a chance [the motion] could be successful” in increasing advocacy for students, but also said the board must also be willing to change course if it fails to do so.

‍“The amendments giving community reps back their votes and ensuring that we still do have a board that represents at least all the facets of the university that should be represented within the union [are] solid. At least we’re there.”

UMFA, administration to begin contract negotiations in May

City committee to take the wheel on U-Pass implementation