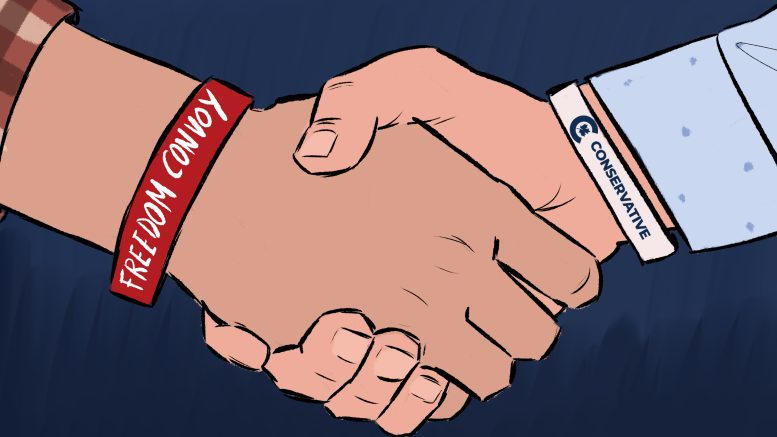 Canada often brands itself as a perfectly peaceful country when compared with its neighbour to the south. There is a propensity among Canadian liberals to paint Canada as a progressive dreamland of racial equality, but this façade is being exposed for what it is in Ottawa. The recent anti-vaccine protests suggest a different reality. Canada’s racism has been revealed in several instances throughout history, from racial segregation and slavery — yes, Canada had slavery — to residential schools and genocide. While Canadians often claim to have transcended these issues, the growing comfort these protests display toward racist symbols and the delayed condemnation from the federal Conservative party shows the prevalence of systemic racism in Canada’s so-called equitable society never really faded from its identity. Racism still underpins this nation.

Despite coming from a racialized country and being a mixed child myself, I had never experienced racism until I visited the U.K. a couple of years ago. I was sitting in a train station when a white British man disrespectfully approached me and told me to go back to my country. At the moment, I didn’t think anything of it. But now I am completely aware that my extra melanin bothered this man. Reflecting on that moment does not cause me any discomfort — rather, it made me realize I wanted to live in a place where I felt accepted. This was why I ended up coming to Canada. I came to the realization that although not every western country with better higher-education programs is perfect, Canada was the best opportunity considering the great diversity and inclusion its population represented, or so I thought.

To make things clear, I would like to say that I’ve never — or at least not up until now — felt like a victim of explicit racism in Canada, but there have been questionable situations that made me feel racially profiled. Though I am hopeful Canada might one day become a racially equitable country where legislation and public action is not skewed based on people’s skin colour, there is certainly a long way to go to achieve that goal.

According to the Canada Research Chair in racial inequality in democratic societies Debra Thompson, the 21st century understanding of racism is polite, subtle and, to an extent, normalized. This then shrouds systemic racism to perpetrators. While empowering more explicit demonstrations of racism, the so-called freedom convoy is a clear example of this uncritical engagement with xenophobia.

While 90 per cent of truckers are vaccinated, the convoys have featured racist symbology to defend their alleged right to remain unvaccinated. From covering a Terry Fox statue with anti-vaccine signs to adorning the streets with swastikas and Confederate flags, many truckers and other fringe groups disrespected every single Canadian minority as a means to supposedly plead their case. Despite Prime Minister Justin Trudeau condemning the racist actions of these individuals, the Royal Canadian Mounted Police (RCMP) has remained peaceful with truckers. The RCMP’s passive hand has drawn criticism from pundits who point out the noticeably different approach the police took with Wet’suwet’en protestors who have attempted to protect their unceded hereditary land from expropriation.

Furthermore, influential Conservative members of Parliament like transport critic Melissa Lantsman and finance critic Pierre Poilievre have continued to voice their support for the movement despite its connection to racist extremists.

Is the Conservative party really that big-tent party that unites far-right social conservatives and centrists? Or is the united conservative vote a failed experiment that is becoming increasingly unelectable? It seems the convoy is answering some of these questions — the radical front that leads the movement, coupled with Conservative party support, suggests a concerning shift to a far-right and populist-informed politics.

The aligning of dead ducks