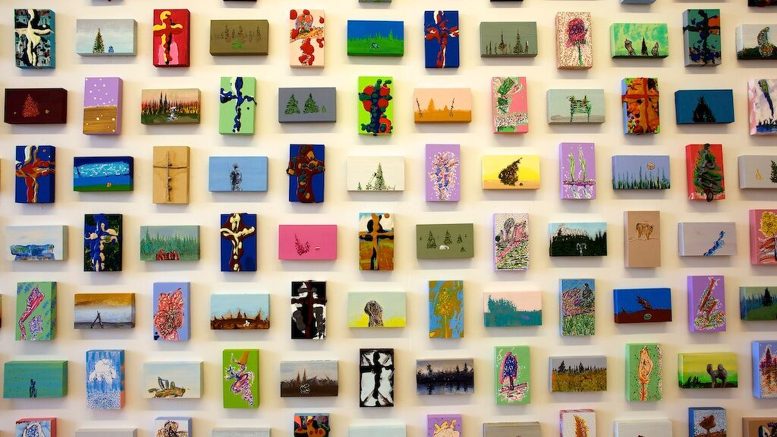 For young artists, Cliff Eyland has always held somewhat of a legendary status.

As a nationally recognized painter, school of art professor, writer and curator, Eyland was a prominent member of Winnipeg’s art community throughout his career. He is likely best known to the average Winnipegger for his installation of miniature paintings at the Millennium Library.

Luckily for those who have yet to appreciate the vast scope of Eyland’s career, the Winnipeg Art Gallery (WAG) is now exhibiting Cliff Eyland: Library of Babel — A Retrospective.

Curated by one of Eyland’s longtime collaborators, Robert B. Epp ,Library of Babel was initially planned in concert with Eyland but transformed into a memorial celebration of Eyland and his life’s work after his passing in May 2020.

The extensive show features work from all periods of Eyland’s career, representing a cross-section of his artistic practice and other work within Winnipeg’s art community. Containing over 1,000 artworks — mainly the file-card-sized paintings Eyland is likely best known for — Library of Babel was inspired by a short story of the same name by Jorge Luis Borges and emphasizes Eyland’s preoccupation with libraries as vast conceptual spaces while highlighting his innovative perspectives of art.

Other materials include drawings, photographs, digital prints, exhibition posters, videos and other archival materials. These collectively provide a window into Eyland’s artistic practice and his personal life, highlighting his personality and outlook on life and art through the common themes of his work.

Like many exhibition spaces, entering Library of Babel felt something like stepping out of one’s own mind and into the brain of another. The feeling was especially evident in this exhibition — there was an immediate energy you could sense in the air of the gallery space which seemed to be emanating from Eyland’s imaginative and lively paintings.

When we step into an institution like the WAG, there is often a sense of order when it comes to painting installations — each work hangs on a wall separate from its companions, with enough room to breathe so as to not impede the viewer’s ability to appreciate the works next to it. However, this sensibility was upended in the most refreshing way in Library of Babel.

Organized chaos reigned throughout the show, with hundreds of small paintings hung in a variety of formations across the gallery walls, creating different rhythms throughout the space.

Crucifix formations — such as the installation “Crucifix (Homage to Gauguin)” — hung over the viewer imposingly on some walls, whereas enormous grids of paintings created a sense of stability as you peered up at this wall of closely packed works in installations such as “Librarians, Books and Clouds.” Grids of paintings were also found mounted on separate walls, which created a larger frame around these works. This formation was present in a personal favourite installation, “63 File Card Paintings on a White Wall,” A Series of paintings assembled in 2019.

There are so many paintings encompassed within LIBRARY OF BABEL that it is difficult to pick out just a few individual ones as highlights. Rather, these works grab your attention in a Gestaltian manner, leaving you to dive deeper into each installation and investigate individual works as you discover them.

Overall, what is so fantastic about LIBRARY OF BABEL is how clearly it demonstrates Eyland’s dedication to art. The works included in this exhibition reflect a lifetime of enthusiasm and experimentation, displaying a wide range of techniques indicative of his ever-evolving practice.

His mixed media pieces were particularly striking, pushing the boundaries of what a painting can be by incorporating writing, drawing and found materials into these works. Although much of Eyland’s work is small, Library of Babel allows us to see the world as Eyland did — with an imaginative, critical and joyful view of the world around us.

You can visit Cliff Eyland: Library of Babel — A Retrospective at the Winnipeg Art Gallery until May 15.

To Break & To Build

Understanding our world through the meaning of shades