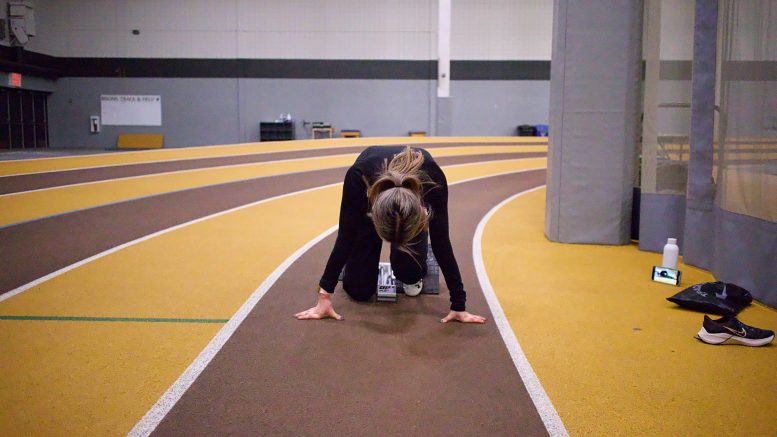 It has been a memorable February so far for the Bisons track and field team. Starting the month with the Jim Daly Bisons Classic 1.0 at the James Daly Fieldhouse, many Bisons performed very well in this event.

One athlete stood out above the rest. Stefan Hreno performed to the best of his ability and came away with some pretty impressive results.

The sprinter finished with a time of 6.76 seconds in the 60-metre dash, beating the previous school record.

“I was very excited to win the race, but beating the record meant so much to me,” Hreno said.

“I [always] just go out there and run as fast as I can. I guess I just ran a little bit faster this time.”

After this impressive weekend, Hreno was given Boston Pizza athlete of the week honours.

“It’s always an honour to win something or accomplish something, including athlete of the week honours,” Hreno said.

“February has been very good to me so far and I believe it all comes down to the work and preparation I have put into this year so far on and off the track.”

Another impressive runner in this event was Jordan Soufi. He also beat the previous 60-metre record but ultimately could not catch up to Hreno.

These two racing together could be a dangerous duo for the rest of the track and field season.

The Bisons also recently travelled to Edmonton, Alta. to partake in the Panda Open at the University of Alberta.

Hreno performed well by putting up an impressive time but ultimately finished fourth overall in his heat in the preliminaries and ninth overall in the semifinals.

While individual meets always mean something, most athletes have their sights set on the Canada West championship next month.

Set to begin March 18, the championship will be hosted this year by the Bisons.

“I am extremely excited for the Canada West championship in March,” Hreno said.

“I have worked so hard up to this point and [I] will continue to do exactly what I have been doing in preparation for that event.”

Hreno is a big part of the team, but others will need to step it up as well if the Bisons want to do well as a group. Expectations are high for the squad.

“We are a very hard-working team and you can expect to see us leave it all out on the track and the field during whatever we do,” Hreno said.

“I am proud to be a Bison because of the work and dedication that we put in to perfect our craft.”

After the Canada West championship, the Bisons will travel to New Brunswick and compete in the U Sports national championship.

Rounding out the conference dates