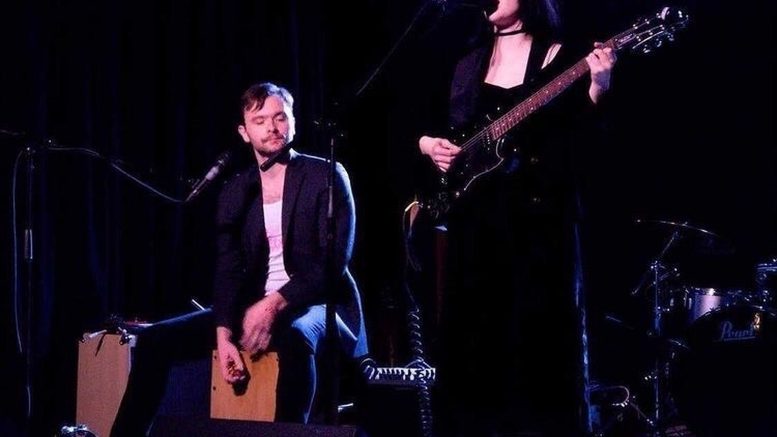 Poodle Paddle is a genre-defying band taking an exciting and alternative approach to live performance in Winnipeg’s music scene.

When asked to describe their sound, the band cited a variety of genres, including grunge, twee pop, indie rock and surfcore, among others. Their energetic and boisterous performances reflect this vast range of influences, leaning into the contrast that arises when presented together to produce a live music experience that is uniquely their own.

Musicians Dani McDonald and Dawson Reynolds met while living in residence at the University of Manitoba in 2019. Together, they formed Poodle Paddle just over a year ago.

“[Poodle Paddle] started last school year when we were both back in the city,” Reynolds said. “We went to Long & McQuade, bought an amp and a mic, brought it back to my basement and just started jamming.”

“Neither of us had been in bands before, but I think we both wanted to be and it just came up very naturally.”

McDonald said, “I feel like we started taking the band seriously maybe six months ago. We were like, okay, let’s try to get a show and make an Instagram, and also name the band.”

Poodle Paddle traces its namesake back to an image conjured out of both of McDonald’s and Reynold’s lives. The pair recounted the story:

“And I love paddles,” Reynolds said.

“One of my favourite toys [as a kid] for some reason was just this tiny canoe paddle, and it was like a little poodle paddle,” Reynolds said.

This fun and alliterative name garnered additional meaning for McDonald and Reynolds as the project has grown, particularly in regard to the wide variety of genres they explore in their music.

Prior to playing in venues, Poodle Paddle put on house shows, inviting whoever they could and even building their own stage by hand.

Alongside their diverse range of musical influences, Poodle Paddle also takes a unique approach to their live performances.

“Most of our friends are musicians, so […] if anyone wants to come up here after we’re done our set, you can play with us or just do your own thing. But it’s always kind of been somewhere where we want everybody’s voice to be heard, and we want everyone to have fun and be able to explore themselves and what they can do,” McDonald said.

“We’re kind of hoping to just jam with everyone, because Poodle Paddle is not something we want to be confined to one genre or sound. So, we’re hoping that, as a duo, along with a rotating line of other musicians, we can just really expand our sound and have a lot of fun.”

Although Poodle Paddle currently does not have recordings of their music available, the band hopes to be in the studio this winter to record an album or EP.

Another of Poodle Paddle’s goals is to create an open and welcoming space at their shows, particularly for queer audiences.

“[We were] just kind of starting our own really queer, really fun scene in the backyard,” McDonald said. “A lot of people were talking at our first couple of house shows, like ‘I feel like I’ve never been in a queer space like this. This is such a queer space.’”

“I love it, it makes me so happy because that’s exactly what I want to be doing, especially with my music career.”

You are cordially invited…