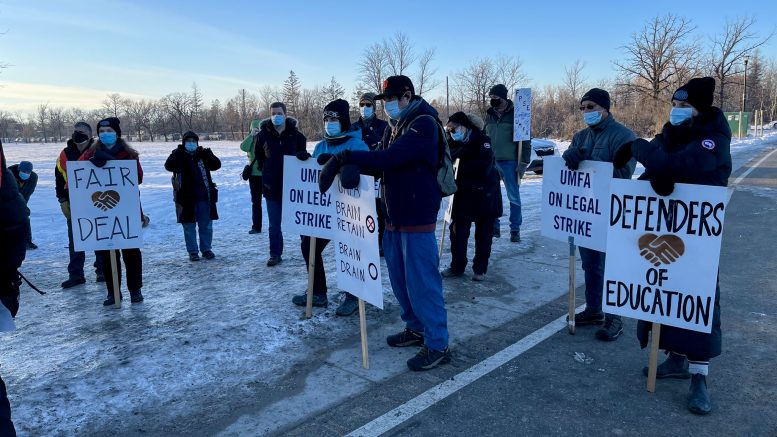 Members of the Federation of Post-Secondary Educators of BC (FPSE) picketed with UMFA on Nov. 29 as the organization donated $10,000 to support UMFA’s cause.

The strike lasted from Nov. 2 to Dec. 7, as the administration and faculty negotiated wages, governance issues and government interference in negotiations.

Sean Parkinson, the secretary-treasurer for the FPSE, said there are “several reasons” the union flew out to support UMFA.

“One is, we certainly don’t like to see a province interfering in academic matters,” he explained.

“All unions need free and fair collective bargaining and when that doesn’t happen, unions from across the country need to support each other. In particular, it’s my view that it’s more than just interfering with things like legislation or wage mandates like they’re experiencing in Manitoba, but it’s especially egregious when it involves a university which […] is quite autonomous. Their proper employer is not the government, but rather the university board. So, government interference is particularly problematic […] for a university.”

The province passed legislation freezing the wages of public sector workers and in 2016 secretly handed the university a mandate to give UMFA a deal without a wage increase, threatening “financial consequences” for noncompliance.

Although U of M president Michael Benarroch stated recently that government did provide a wage mandate, Minister of Advanced Education, Skills and Immigration Wayne Ewasko denies this.

Benarroch also refused to provide details of the mandate but insisted the government was imposing it upon the administration.

“We also experience government mandates and […] the success in which the government has used mandates in B.C. is something that is attempting to be copied […] in other provinces, namely Manitoba,” he said.

Parkinson said with wage mandates “pretty well-established” in B.C. and teachers “nearly resigned to accepting them,” he hoped teachers in Manitoba would see that acting now was important to prevent them from becoming “entrenched.”

“The hard work comes at the front end,” he said.

Parkinson also pointed out both UMFA and educators in B.C. have faced wage mandates that have not kept up with inflation.

The flying picket comes days after the Court of Queen’s Bench heard arguments from UMFA regarding government interference in negotiations with the university in 2016.

The provincial government’s lawyers acknowledged the interference was unconstitutional but argued UMFA’s demand of $28 million was excessive in part because such a high sum would be unfair to taxpayers. The mediator between UMFA and the university had criticized the faculty association for not accepting binding arbitration to end the strike.

Parkinson argued that although arbitration could be helpful regarding monetary concerns, governance issues were too “nuanced and particular” to leave in the hands of an arbitrator.

He cited educators’ concerns surrounding how many terms they are required to work in a row without a break and whether classes would be taught online or in-person.

“Some courses really work well online, but others don’t and it’s the faculty member that knows [that],” he said. “Imagine that an administrator or […] an arbitrator, a neutral third-party, would decide such an important governance issue.

“I talked about unions standing together before, but […] when these governance issues are put on the table, it has to be [union] members and their employer that sort them out themselves. You can’t leave that to a third-party to figure out for you. They’re such nuanced discussions, you have to rely on the expertise of the faculty members.”

UMFA is supporting students in its strike mandate