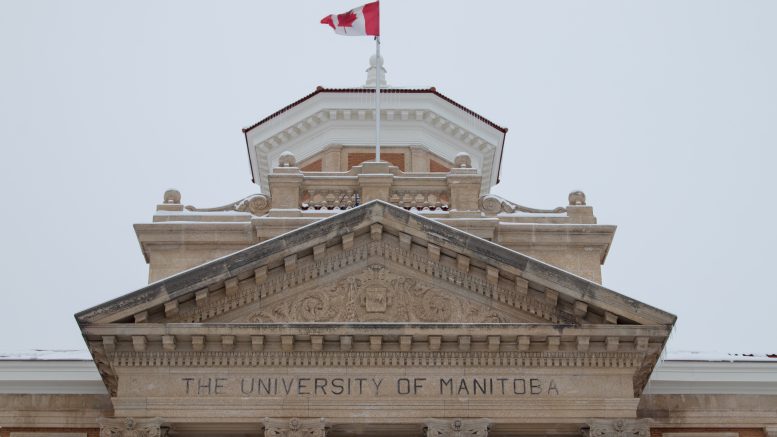 Jaron Rykiss, a political studies and philosophy student who was at the protest, described blocking the doors as a “quid pro quo.”

“We definitely knew that going into it, that this was going to be something that [makes] a splash.”

The University ofManitoba Faculty Association (UMFA) has been on strike since the beginning ofNovember after months of failed negotiations. UMFA is demanding a better salary offer from the university.

The U of M offers some of the lowest salaries of the 15 research universities in Canada, which faculty say has negatively affected recruitment and retention of staff.

UMFA has accused the provincial government of interfering in its negotiations by imposing a salary mandate on the university, which UMFA says is prolonging the strike and preventing the parties involved from reaching a fair deal.

Despite the province’s claim that salary mandates are standard practice, a recent appeals court ruling found the government “substantially interfered” when it handed a mandate to the university in 2016 directing the administration to refrain from raising faculty wages, threatening “financial consequences” if they did not comply.

The university and UMFA held talks to discuss their latest offers over the weekend and came to the bargaining table Monday to continue negotiating.

Tensions flared around7:30 a.m. last Monday when security staff attempted to enter the building, triggering an altercation between security and a protester.

A picture of the conflict shows the protester holding the security guard’s hands against the wall above their head.

Rykiss said the person who started the conflict was not an official member of SSUMFA and acted of “their own volition.” After the altercation, Rykiss said the individual is no longer welcome to participate in the group.

SSUMFA issued a statement on Instagram the day after the incident denouncing the altercation.

“This individual went against the ground rules that the entire group agreed upon before beginning our demonstration. We do not condone any form of violence and agitation, and we would like to make it clear that anyone who has these intentions should refrain from engaging with our group in the future,” the statement read.

“We […] are committed to employing stronger vetting procedures in the future.”

Members of SSUMFA also met with a representative from the administration’s bargaining team to state their concerns, including what they say is “misinformation and intimidation”pushed on students by the administration.

In an email to the Manitoban,SSUMFA said the university has been unclear about whether students working for faculty had the right to refuse to cross the picket line. They described the university’s decision to shut down UM Learn, the university’s online learning portal, on the first day of the strike as “an attempt to divide students and faculty.”

“The administrator refused to discuss the reasons why UM Learn was disabled, other than to say ‘there are two sides to the story,’” the email read.

“Similarly, when asked about the conflicting information regarding the bargaining position of the university’s administration and UMFA, the administrator […] continually refused to answer questions, was broadly dismissive of the concerns of students and condescending toward [students’] knowledge and understanding of the issues surrounding this strike.”

Students also requested a meeting with university president Michael Benarroch. When their demands were not granted, SSUMFA members staged a sit-in at the office.

“They were forced to take private meetings outside of the room and repeatedly tried to negotiate with us, but we didn’t budge,” the Instagram post about the sit-in read.

After an hour, SSUMFA left the office. SSUMFA stated over email that it has still been unable to schedule a meeting with the president.

Rykiss said he and other students hope the administration will “pick up the phone” and offer a better deal.

“I think we all just want to get back into class and I think that the administration has the power to do that by offering a fair deal and we’d love to see them do that.”

Lukacs vs. the U of M