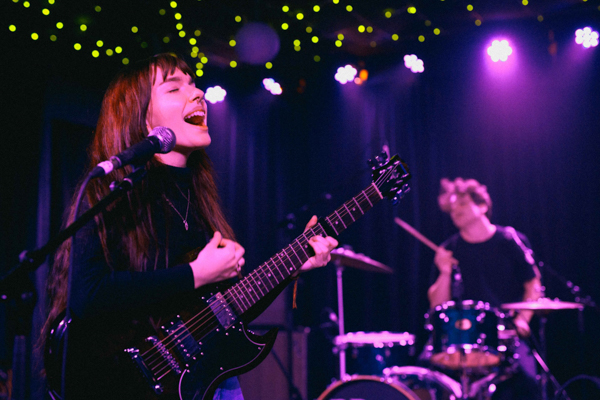 Photo by Adam Kelly, provided by House of Wonders

The Good Will Social Club was lit purple on the night of Nov. 20 for the first live showcase of the House of Wonders roster. The label was started by leader of art rock luminaries Yes We Mystic Adam Fuhr in early 2020, alongside the launch of his studio of the same name. Although the label has been steadily releasing projects from its three signees — alt-country troubadour Amos the Kid, indie rockers Julien’s Daughter and the inventive folk rock band Virgo Rising, the beginning of the label coincided with the beginning of the COVID-19 pandemic, which has made for a strange early growth period.

Fuhr said “[r]unning the label has been very solitary laptop-y work, and I know for the bands it’s been hard to release their music in the world without that human connection. So, to watch people come together and have such a great time was very emotional for all of us.”

The show sold out almost instantly when advanced tickets were released, which took Fuhr by surprise. The enthusiasm in the room was palpable.

“We knew we had some heat but didn’t realize quite how much,” Fuhr said.

Openers Julien’s Daughter started the night with a bang, running through a blisteringly energetic set full of early ’00s dance-punk energy, exemplified by their cover of the Franz Ferdinand classic “Take Me Out.” Frontwoman Emma Murphy’s dramatic stage presence adds to that vibe, with a touch of Karen O or Debbie Harry about her. The crowd was very receptive, moshing and stagediving and yelling lyrics.

Virgo Rising took the stage next, quieting the room with a run-through of their excellent debut EP Sixteenth Sapphire as well as a few new songs. Lead singer Emily Sinclair’s voice is really a force of nature, able to jump from hauntingly intimate near-whisper to glass-shattering belting with shocking ease. The band’s music has a similarly unstable tension, always taking unexpected turns, with tempo changes, sudden freak-outs and wild dynamic changes. Their emotional intensity and more timid stage presence clashed slightly with the frenzy that Julien’s Daughter whipped up, but you didn’t have to look too far to find fans singing along and giving the band the attention they deserve.

The great Amos the Kid — the first signee to House of Wonders — headlined, delivering a very strong set with songs culled from his two EPs. The crowd yelled along to tracks like “Jesus Cocaine Ketamine Christ” and “You Make It So Easy,” which already feel like local classics. Amos reflected on his past job as a bar-back at the Good Will, which is odd to imagine given the ease and comfort of his stage persona — he really looks like he belongs up there.

For all three bands, Saturday felt a like coronation of sorts, a raucous party celebrating all the work that Fuhr and the artists have put in over the past year. Though they seemed slightly taken aback by the rabid audience, they were prepared to throw that same level of energy right back at them.