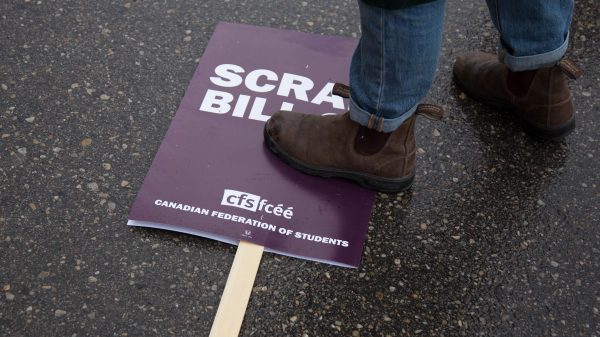 The UMSU board of directors voted 28-1 to defederate from the Canadian Federation of Students at its Nov. 26 meeting. In order to successfully leave the federation, UMSU must now initiate a petition and get it signed by at least 15 per cent of the student population, then hold a referendum.

The meeting began with a presentation by representatives from the Manitoba office of the Canadian Federation of Students. Highlighted in the presentation were lobbying efforts toward goals such as the abolition of tuition, health care for international students and preventing the controversial provincial bill 33 — which, if passed, would enable the minister of economic development and training to set guidelines for changes in tuition as well as prohibit compulsory student fees from being charged by student unions.

The presentation also pinpointed the services the Canadian Federation of Students provides to members — including members of UMSU — such as international student identity cards, assistance with filing taxes, a national student health-care network and anti-racism workshops.

The board then introduced motion 0497 — a motion required every two calendar years, according to a 2018 change to the provincial UMSU Act — which, if successfully passed, would have meant the reaffirmation of UMSU’s federation membership.

The motion reads: “Whereas the corporation’s [UMSU] membership in an external organization must be affirmed by a majority vote of the council every second calendar year.

“Whereas per the UMSU Act, if the corporation’s [UMSU] membership in an external organization is voted on by the council and not affirmed by a majority vote, the council must take all required steps to terminate that membership.”

The motion was debated in a closed session of the board.

Brenden Gali, chairperson of the Manitoba chapter of the federation, expressed disappointment upon hearing of the vote result.

“It is incredibly disappointing to hear that [UMSU’s board of directors] wishes to move in the direction of severing ties with us,” said Gali.

“Our concern […] of course, is the wellbeing of students who, while […] studying and attending classes from home during a pandemic, have also just gone through a stressful period of unease with the looming potential of a faculty strike,” Gali said.

“We maintain our mandate to support and advocate for students, so while this motion has passed and moves in the direction of ‘defederating,’ it will be business as usual for us.”

If the petition is successful, there will then be a referendum held in which all members of UMSU may participate. If the referendum ends with a majority vote against continued membership in the Canadian Federation of Students, a vote to ratify the withdrawal of UMSU from the federation will be held at the federation’s next general meeting.

Pending success in all of the above steps, decertification would take effect the following June 30.

In 2005, UMSU left the Canadian Alliance of Student Associations (CASA) — a federal lobbying organization for students which rivals the Canadian Federation of Students — and afterwards joined the federation. A legal drama then unfolded with CASA suing UMSU over unpaid membership fees in 2007. The lawsuit was dropped after UMSU and CASA reached an undisclosed financial settlement.

As far back as 2013, UMSU has made efforts to leave the Canadian Federation of Students.

That year, UMSU struck an ad-hoc committee to review how federation dues collected by UMSU are spent as well as to evaluate whether the relationship was worthwhile for UMSU.

In September 2013, it was revealed that UMSU removed all pages promoting the Canadian Federation of Students from day planners that were handed out annually to students for free.

During the 2013-14 academic year, the then-UMSU executive refused to pay fees to the federation over an ownership dispute involving an UMSU website. As a result, UMSU was made to pay close to $1 million to the federation in 2016.

In 2016, there were public tensions when then-UMSU president Tanjit Nagra alleged that members of the federation executive verbally harassed her and UMSU demanded a public apology. There was also an incident in November 2016 at the federation’s Day of Action protest in which a then-UMSU executive complained that the federation prevented him from speaking at the rally.

In early 2018, UMSU held a non-binding plebiscite in which more than 64 per cent of voters voted in favour of remaining in the federation.

That year, UMSU continued to push to leave the organization and it was demonstrably a priority of then-UMSU president Jakob Sanderson. In November 2018, the UMSU board of directors voted against reaffirming membership in the Canadian Federation of Students and Sanderson publicly endorsed the idea of UMSU leaving the federation and becoming a member of CASA instead.

In January 2019, UMSU denounced the federation for its support of the boycott, divestment and sanctions movement citing the divisiveness of such a position.

In February 2019, CASA gave a presentation to the UMSU board of directors just days after UMSU participated in a CASA mental health initiative.

In March 2019, UMSU launched a now defunct website, demandbetter.ca, as part of a marketing campaign toward holding a second referendum on leaving the federation. The campaign centred around the idea that the dues paid to the federation could be put to better use by UMSU.

In April 2019, UMSU budgeted $30,000 for the 2019-20 academic year for a marketing campaign toward leaving the federation, some of which was put toward demandbetter.ca.

At the Oct. 22 UMSU board of directors meeting, UMSU’s vice-president advocacy, Kristin Smith, voiced the position that the federation is to blame for its poor relationship with the provincial government, calling the federation “incredibly antagonistic.”

Presently, there have been recently renewed efforts marked by UMSU’s board of directors receiving another presentation from CASA in early November, followed by the presentation from the federation and subsequent vote which took place Nov. 26.

A tough nut to crack

Efforts were made toward leaving the federation once again in fall 2015 but ultimately the CBUSU could not, because according to federation bylaws, a petition cannot be recognized if membership fees are outstanding. At one point, the union considered declaring bankruptcy as a result, and the CBUSU eventually reached a court-ordered settlement with the federation. Today, the CBUSU is still a member of the federation.

UMSU did not respond to requests for comment by press time.