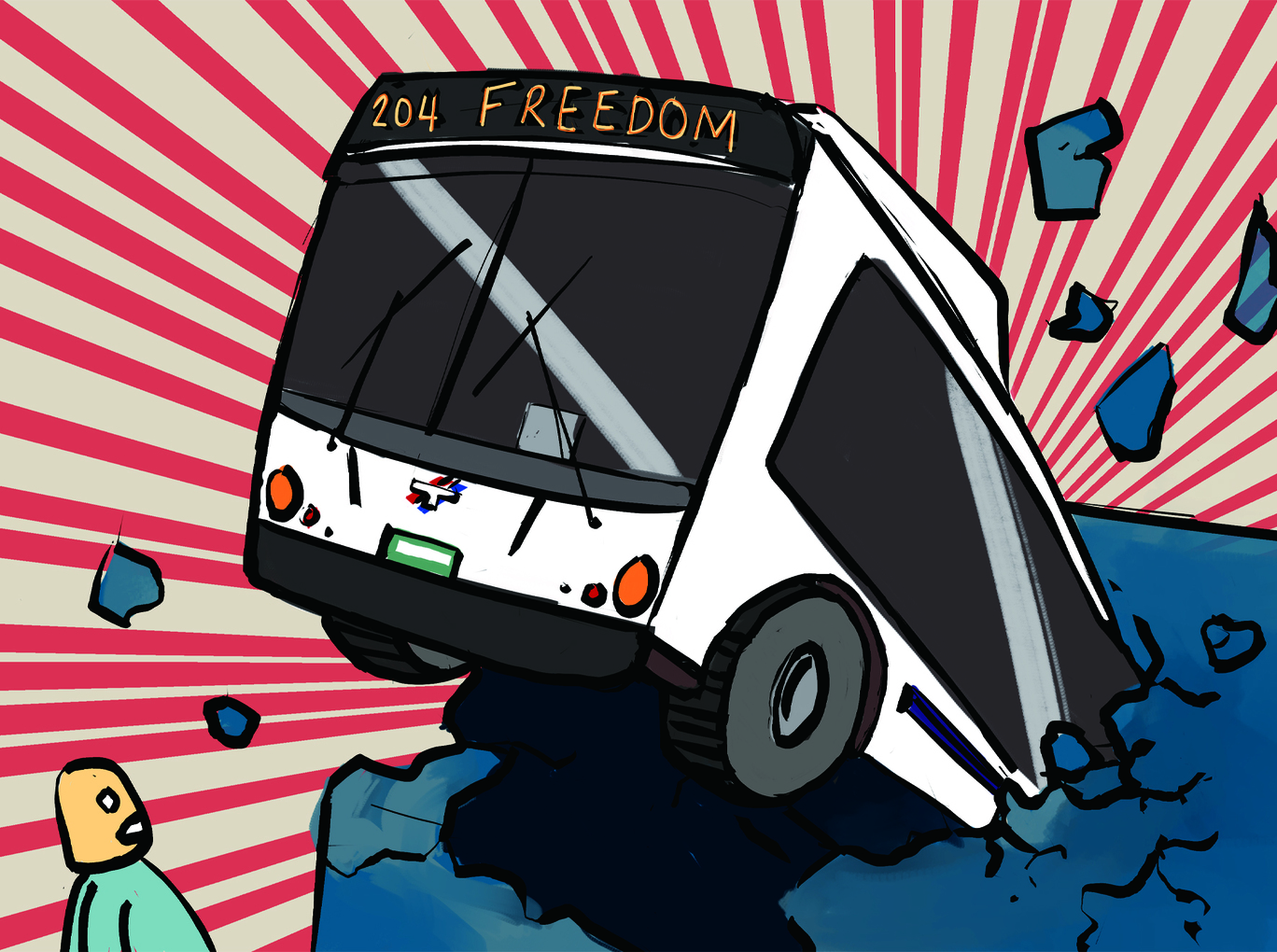 When it comes to budgeting, Winnipeg’s city council continues to demonstrate its expertise in reactionary policy.

At Winnipeg city council’s public works committee meeting Nov. 13, transit managers claimed that the only way to keep spending under the two per cent cap proposed would be with “significant cuts to service.”

The services they intend to cut include the free Downtown Spirit routes, ending weekday routes over an hour earlier at 12:15 a.m., discontinuing the text program — which allows passengers to text a number to get up-to-date arrival times without the need to use cellular data — and completely stopping the print schedules which are sent to 75 locations across the city, including libraries and seniors centres.

And all of these services are on the chopping block because of city council’s arbitrary two per cent cap on spending on transit.

City council would lead us to believe we’re in a budget crisis. If they’re to be believed, we need to pinch pennies in every area of municipal spending — the fire department, the police service, libraries, pools, arenas and improvements to athletic fields. Council asserts that Winnipeggers must make a choice between either suffering significant cuts to services or keeping the services as they are and have citizens face higher taxes.

This assertion is nothing more than a false dichotomy.

The reality, however, is that city council has remained silent on one of the biggest issues facing nearly every large city in Canada: vacant homes.

The problem, seemingly originating in B.C., is wealthy people buying property and letting it sit dormant to avoid higher rates of taxation. In 2015, one third of the real estate market in Vancouver was owned by Chinese buyers — essentially, people who do not call B.C. their home, and are wealthy enough to own at least two properties.

This trend is seen all over North America, with wealthy, foreign buyers picking up real estate. In Los Angeles, 2017 census data found that there were around 100,000 vacant homes — while nearly 60,000 people remained homeless.

In recent years, this problem has only escalated across Canada.

A report from Point2 Homes in August found that, in Canada’s 150 largest cities, nearly nine per cent of all homes are vacant — which represents 1.34 million homes. Between 2006 and 2016, Winnipeg topped the list of cities with the largest increase of empty homes, with an increase of 42.7 per cent — up to 4.5 per cent from 3.1 per cent.

Winnipeg’s jump in empty houses is dwarfing the rate of growth in any of the rest of Canada’s largest cities — more than Montreal’s rate of growth, which was 36.3 per cent and represented an increase of around 17,000 empty homes, a vacancy rate of 7.6 per cent.

It’s clear that there’s plenty of money in Winnipeg — city council is just not willing to go and get it.

While rich investors are making out like bandits, city council has the working class of Winnipeg fighting for crumbs.

The arbitrary two per cent cap on spending is already being seen as gospel, and there is a belief that there is nothing the city can do to change the inevitable cuts. After all, mayor Brian Bowman will remind transit riders that it was Brian Pallister who cut transit’s budget by over $5 million, and blame the inevitable cuts on him.

These excuses should fall on deaf ears. If the city wanted to strengthen — rather than weaken — transit, it easily could. But it would force Bowman to tackle foreign investment head-on.

If Bowman wants to follow the platform he was elected on, which included building up transit services, he must grow the overall sources of revenue, not shrink the budget to accommodate current sources.

In 2017, Vancouver implemented a modest tax of one per cent on vacant properties in the city. Not only did the tax bring down rates of vacancies by 15 per cent, but it raised an incredible $38 million in revenue in the first year of it being implemented.

Winnipeg must now follow suit. If Bowman refuses to tax the rich people hiding their money in Winnipeg real estate, he is obviously lying through his teeth about the desperate need for caps to spending and cuts to services.

By avoiding the issue, city council is in effect choosing to put the interests of the wealthy, foreign investors ahead of the working-class people who rely on front-line services like transit.

It’s time Winnipeg had a city council that stood up for the needs of the average Winnipegger and strengthened the essential services rather than resorting to the same old playbook of cuts and regressive policy.