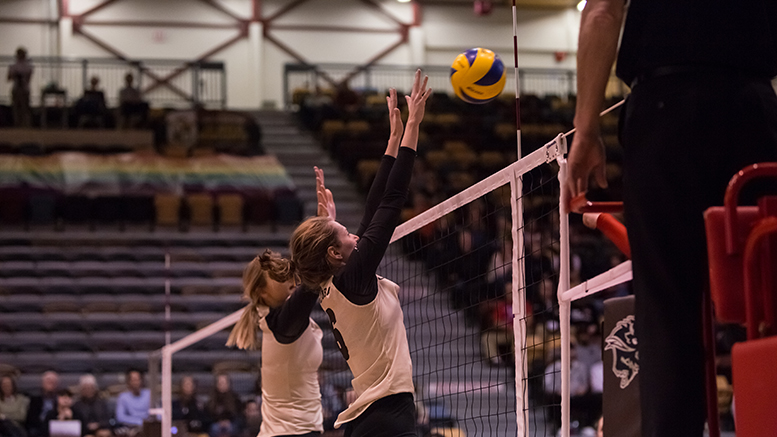 The Bisons women's basketball team dropped a pair of games to the Regina Cougars on the Feb. 8 and 9 weekend.

In the midst of a dogfight for a playoff berth, a cat scratch may be what kills another Bisons program’s post-season aspirations.

The U of M Bisons women’s volleyball team dropped a pair of games to the University of Regina Cougars this weekend, knocking them out of a safe spot in the standings.

With the losses the Bisons fell to 11-11 on the year and sit in a three-way tie for sixth. With just two games remaining, the Bisons must stay ahead of the 10-12 Mount Royal University Cougars to make the post-season.

The Bisons were up 22-20 late in the first frame, but the visitors scored five consecutive points to come from behind and win the set by a score of 25-22. Sandiford pounded down five kills in the set for Regina, while Josie Abbott knocked down three for the Bisons.

Emma Matheson and Kearley Abbott each supplied some offence for their teams in the second set. Kearley Abbott knocked down four kills for Manitoba and Matheson killed five balls for Regina. The Cougars pulled away late in the set and a Bisons charge was met with three straight points, capped off with a Jessica Lerminiaux service ace for the 25-17 Cougars win.

In what became the final set, Regina put together two early runs — 5-0 and 7-0 — to take a 13-4 lead. Brooklyn Reynolds connected on kills in both scoring runs, while Brittany Rousseaux served up an ace to end the set 25-18 and take the match.

The Bisons dropped game two of the weekend 3-1 Saturday.

Bisons libero Bujan and left side Tori Studler started in their final regular season home game in a Bisons uniform and were recognized prior to the match.

“As much as it is important to me personally and Tori as well, it’s still a fight for playoffs right now and I’ll save the celebration for after,” said Bujan.

Manitoba held a 7-6 lead in the second set but the visitors strung together five points to grab an 11-7 advantage. The teams exchanged attacks for the rest of the set and the Cougars came away with a 25-18 set win.

Sandiford smacked down five kills for Regina in the second set, while Kearley Abbott killed three balls for the herd.

Josie Abbott led the Bisons charge in the third frame and spiked down four kills. Kearley Abbott and Allison Alcock were also contributors to the Manitoba offence, each hitting three kills in the set.

The herd led 24-21, but Regina scored back-to-back points, forcing the herd to call a timeout. Manitoba rallied and right out of the timeout Kearley Abbott sent a laser beam to the floor to win the set 25-23 and force a fourth set.

Regina led 20-18 late in the fourth set and put together a 4-0 scoring run to expand their lead to 24-18. The Bisons scored three straight points, including an Alcock kill, to cut the lead to three and knock the Cougars on their heels.

Regina called a timeout to calm its players down and it worked, as Matheson slammed down a game-winning kill on the next rally, taking the set 25-21 and the match.

Manitoba will travel to Trinity Western University next week to face the Spartans. Game one is 8 p.m. CST on Feb. 15 and game two is the next day at 7 p.m. CST