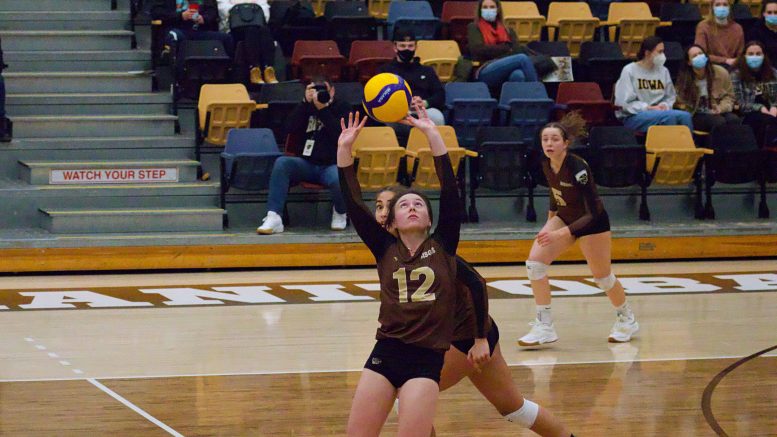 Despite a rough season, the Bisons women’s volleyball team wasn’t without bright spots this year. Setter Katreena Bentley, a first-year player named to the Canada West all-rookie team, was one such spot.

Also appointed to the U Sports all-rookie team, the Winnipeg product put up 685 assists, 22 kills and 50 points in total this season — incredible numbers for anyone, let alone a rookie.

Bentley also led all of Canada West in assists per set with a total of 10.53.

Overall, an impressive season for Bentley. Although she could not be happier about winning her award, Bentley says her teammates deserve the accolades as well.

“I am so proud of myself when it comes to this season,” Bentley said.

“I think I took a great step forward and helped my team do whatever it takes to win. Individual awards are never won by just individuals, the whole team deserves this for their great play.”

Bentley credits her historic season to all the time she puts into her game every day. She says her drive to constantly improve is what allows her to succeed.

“I think I had a great year because of all the hard work that I put in on and off the court,” Bentley said.

“I have worked hard since day one [with] the Bisons and have not stopped since. This is extremely important to me because I always want to improve.”

However, the women’s volleyball team did not have the season it was hoping for. The team finished with a 6-10 record, placing second last in the east division, and had an early exit out of the Canada West playoffs after going without a win in its three games. Even though the Bisons did not have the finish it wanted, Bentley is still proud of all the work she and her teammates have put in so far.

“Overall the season was not exactly what we were looking for,” Bentley said.

“Our regular season was not bad, but we were not happy with the playoffs. We are a good team and did not perform to the standards that we set for ourselves. I am still very proud of all the girls.”

Already looking ahead to next season, Bentley says she expects her group to have a drastically better performance in the playoffs. She estimates her team’s hard work over the off-season will compliment its experience.

“I am looking forward to doing well in the playoffs next year,” Bentley said.

“We will have a more experienced team and should be able to have a better season. We are going to work hard, [practice] and play like I know we can. The Bisons are going to have a great next season.”

U of M Bisons drop pair at home to Regina Cougars