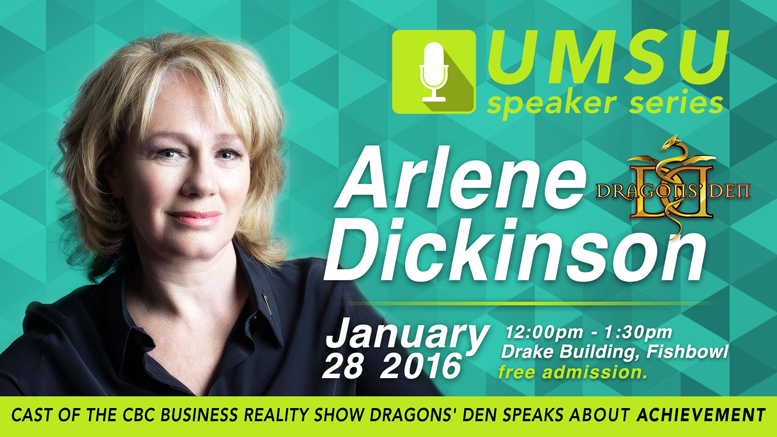 On Thursday, Jan. 28, the UMSU 2015-16 Speaker Series will bring renowned Canadian entrepreneur Arlene Dickinson to speak in the “fishbowl” area just off of the Drake Centre’s atrium. The event is free of charge and open to all U of M students.

Dickinson, most commonly known for her eight-year term on the Canadian edition of popular business reality show Dragon’s Den, has worked abundantly in the business world and is worth an estimated $80 million.

In addition to her former television duties, Dickinson remains the CEO of large independent marketing service Venture Communications, and the founder and CEO of YouInc, an online company dedicated to helping all entrepreneurs learn and grow in the business world.

“Ultimately, the goal we had in mind was to bring in a wide variety of speakers that touched upon different topics, and Arlene was one that immediately came to mind,” UMSU’s vice-president student services Jessica Morrison told the Manitoban.

“We got her because – in having her in mind so early – we were able to seek her out and find what timeline worked best. She was always someone that we did want to bring in.”

Dickinson will be speaking primarily about the idea of “achievement.” According to Morrison however, the discussion should hopefully be driven by the input of students as well.

“We want to give students the opportunity to ask her questions based on her story and based on her experiences, so the floor is really open to them to chat with her about what they would like to hear her speak on,” said Morrison.

Morrison went on to explain that it’s easy for young adults to identify with an entrepreneurial show such as Dragon’s Den due to the focus it places on contestant’s personalities, as well as their products.

“A lot of the folks that you see coming on Dragon’s Den – they’re not only selling this product, idea, or concept, but a lot of the time they have a personal story to share alongside it,” Morrison explained.

“I think, for us as young people watching the show […] we can identify with what it is they’re selling. Whether it’s their personal story, whether it’s their product, their concept, their idea, and I think we’ll definitely hear a lot of that come through when Arlene comes to speak.”

Morrison stated that although she can’t announce any names just yet, UMSU is currently working on arranging the next Speaker Series event for a date in late March or early April. The event will feature a speaker to coincide with the U of M’s “sustainability week.”

Advanced polls attempt to spur students on to vote

An evening of blunders