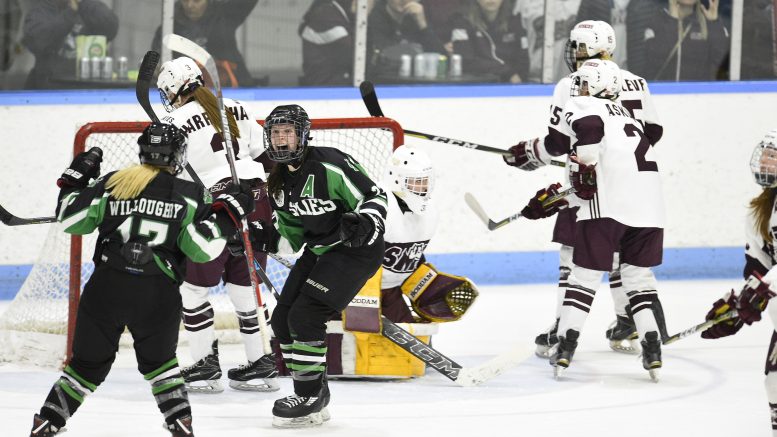 Saskatchewan celebrates a goal against Saint Mary's in the quarter finals at the U SPORTS Women's Hockey National Tournament in London, Ont. on March 15.

With their wins, Saskatchewan and Western will square off in the semifinals, Saturday at 3 p.m., while Saint Mary’s will take on Montreal in the consolation round earlier in the day at 10 a.m.

The opening quarter final was a battle of the Huskies. Both sides came out swinging, but penalty problems sank Saint Mary’s, as Saskatchewan upset the second seed in a 3-2 win.

Saskatchewan got on the board first, Kaitlyn Willoughby cut into the zone, toe dragged a defender and put a backhander over Rebecca Clark’s shoulder to make it 1-0.

Saint Mary’s played flat throughout the first period but surged back in the second. Caitlin Pejkovic and Breanna Lanceleve scored a few minutes apart to give the Huskies a 2-1 lead, but before the period was out Abby Shirley snuck one by for Saskatchewan to knot the game at two.

Both teams threw everything at each other through the final frame, but frustrations for Saint Mary’s got the best of them. Nicole Blanche took a tripping call 200 feet from her own net, and Saskatchewan pounced.

Shirley pulled back and fired a shot that bounced to a wide-open Kennedy Harris at the side of the goal. She banged one into the empty cage and Saskatchewan locked down to preserve a 3-2 victory.

In game two of the opening night, the host squad shelled the visitors, taking the game with a 4-0 shutout win.

Despite having the tenth ranked offence in U SPORTS, the Mustangs got rolling in the second period and filled the net. Shailyn Waites and Ali Beres scored less than a minute apart to give Western a 2-0 lead, and Waites put home her second of the game at the 7:16 mark to put the Mustangs up 3-0.

The quarter finals conclude tomorrow with the University of Manitoba Bisons taking on the Queen’s University Gaels at 3 p.m. and the Concordia University Stingers will play the St. Francis Xavier X-Women at 6 p.m.

Bisons get swept by Cougars in men’s hockey