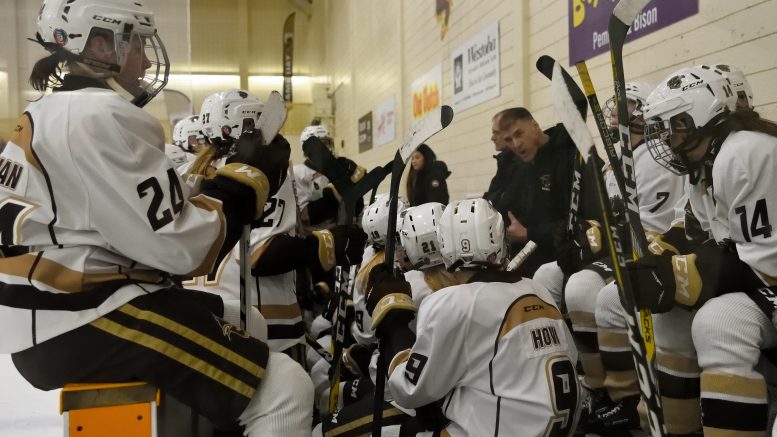 Bison head coach Jon Rempel talks to his players during a timeout in the Canada West semifinal against the Alberta Pandas on Feb. 25 at the Wayne Fleming Arena in Winnipeg.

In his fourteenth season behind the University of Manitoba Bisons bench, head coach Jon Rempel has been named U SPORTS Women’s Hockey Coach of the Year.

This season Rempel had his squad sit at a No. 1 national ranking, a Canada West championship, and a berth at nationals. He and the team will now look towards checking off the fourth box, a U SPORTS National Championship banner.

“I think the year went pretty much according to how I could’ve scripted it,” Rempel said.

Rempel’s superb scouting and recruiting skills were on full display this season, ranging from veterans to rookies. Manitoba was 14-2-1-0 in one goal games, which led the Canada West, something Rempel noted was an advantage heading to London.

“This team played the right way this year,” Rempel said.

“We were comfortable in those games, and I think in years past, even though the team has been very successful – not having really ever knocked the door down in the last three or four years – I think that one of our Achilles’ heels was we weren’t comfortable playing in those kinds of games and weren’t satisfied that we could win a 1-0 game and be OK with that. This year this team is OK with that.”

“This is a different team,” he said. “Some of the teams we had here early on were, and I think all the players on those teams would agree with me when I say we were, probably overachievers.”

“I don’t see this team in that same type of vein,” Rempel said.

“This team has probably achieved what it’s supposed to achieve based on the last three or four years and those kinds of things. Is it the best team I’ve ever had here? I don’t know, it probably is, it’s probably the deepest team. That I would say.”

At the same U SPORTS Banquet where Rempel won his award, rookie netminder Lauren Taraschuk was named to the U SPORTS All-Rookie team. She and goalie-partner Rachel Dyck came up huge for their team, both acting as main catalysts for the team’s success.

“Big credit to Rachel for really sort of taking Lauren under her wing,” Rempel said.

“I thought when Rachel kind of dropped the ball early in the year and was struggling with that whole fifth year thing – I mean, without [Taraschuk], we could’ve been in a big heap of trouble there, until Rachel got things straightened out.”

Dyck stumbled out of the gate early, giving up 14 goals in her first four starts – for a 2-2 record – and was pulled in her fifth start, after giving up two goals on eight shots against Mount Royal. From that point she went 10-2, and finished with a 1.67 goals against average (GAA).

“Rachel did get things straightened out because she realized, ‘Oh, that [Taraschuk] could play,’” Rempel added..

Aside from Taraschuk, the rookies all played a big role in the team’s success this season, especially when the team was stretched thin with injuries.

“Back in October we were down to, I don’t know, in Mount Royal there was getting pretty thin,” he said.

“Had those girls not come in and done some of the things that they did, and continued to do throughout the year in certain spots, I don’t know if we’re sitting here today to be honest with you.”

Rempel singled out the play of Lauren Warkentin, who assisted on Alana Serhan’s goal in game two of the finals.

“With [Warkentin], what we really needed this year was probably to take the extra step,” he said.

“To take the pressure off of Alexandra [Anderson] and Caitlin [Fyten] and Erica [Rieder] in terms of minutes, was someone that could eat minutes, and she can eat minutes.”

Rempel also noted the play of Courtlyn Oswald during the playoff run as another important performance for the team.

“I think Courtlyn has been an unsung hero in these playoffs,” he said.

“She had a great year actually, and her numbers will never be high just because of the role I have her in, but the little things that she does every game are just so hockey intuitive. And she has a hockey IQ that’s so high that, as a coach, you really appreciate those kinds of things.”

The Bisons will turn their attention to a matchup with the Queen’s University Gaels in their tournament opener. Puck drop is 3:00 p.m. at Western University in London, Ont.

Bisons centre looking to life on the farm

Changing of the guard for Winnipeg