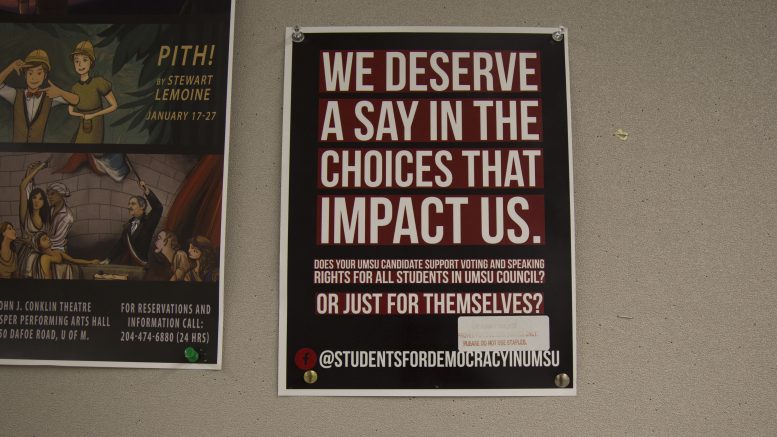 Students for Democracy in UMSU posters were put up next to campaign posters for the upcoming UMSU elections.

A group of students at the U of M is aiming to improve democracy on campus.

The group, Students for Democracy in UMSU, aims to achieve this by pushing for increased participation of the student body in governance through advocacy efforts.

Matthew Gervais, a University 1 student and group member, said the overall goal of the group is to decentralize student governance so students can become active participants “instead of passively watching” decisions being made for them.

Gervais said the group’s mandate stands in sharp contrast to the bylaws of UMSU, which he said grants the union’s council the power to make final decisions, regardless of the outcome of a general assembly, a situation which he said renders general assemblies powerless.

Gervais said the group plans to bring students into equal standing with council members, where there would be no discrimination in voting rights between council members and students at large.

“The goal, in summation, is to have students hold the highest democratic power in the university – the highest decisions by students can be final decisions,” Gervais said.

He added that this will ensure no portion of the group could pass motions without the knowledge of the entire membership. Gervias also mentioned that quorum would still be required for the council meetings to go ahead, preventing students from passing motions outside of council.

Another goal of the group, he said, is to increase the amount of notice required for UMSU annual general assembly meetings, specifically changing “the agenda circulation date to five days now instead of the previous two days.”

Gervais said that an observable “flaw” with UMSU annual general assemblies is that notices are too short and students are unaware of the annual general meetings.

Dylan Fijal, a sociology student at the U of M, voiced similar concerns on the publicity of annual general meetings last year.

Fijal had criticized the short notice given by UMSU, describing it an act of “obstructionism” which gave the appearance UMSU’s actions were deliberate and intended to keep students away from the meetings.

Fijal suggested UMSU give at least four weeks notice prior to the meetings being held.

Gervais said suggested changes to current policies will ensure that students are properly informed and allowed to “exercise power directly.”

“The plan is to bring this up with people who are running for council and running in the election right now,” he said.

Gervais said members of the group had come across students who were unsure why they are paying certain fees, and students who are oblivious to many issues concerning students on campus.

The group runs a Facebook page and Gervais said students are welcome to ask questions or attend weekly meetings the group holds Wednesdays.

“We encourage as many people to get involved as possible. Because the more people you have, the more capacity you have to do things,” Gervais said.

The group strategically put up posters next to campaign posters for the upcoming UMSU elections. Gervais said this move was deliberate and intended to shift the attention of voters to his group’s mandate.

Students for Democracy in UMSU is not a registered student group. In a comment obtained by the Manitoban via the group’s Facebook page, the group representative said they do not plan on applying for recognition by UMSU.

A hamper for a better holiday