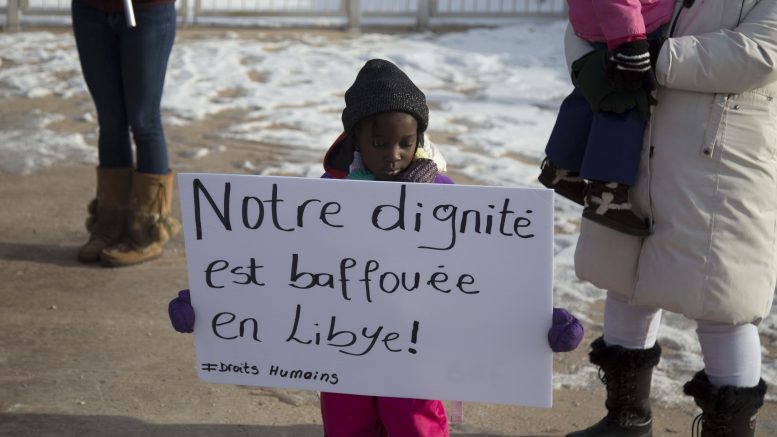 Protesters held signs that read messages like, “Our dignity is violated in Libya.”

Winnipeggers have organized in response to a mobile phone video, obtained by CNN, of men being auctioned off in Libya.

The video, which has been met with international outrage, shows a man in front of a group of presumed migrants from sub-Saharan Africa. “400, 700, 800,” says the man in the video. “Big, strong boys for farm work.”

The global outcry following the release of the vide has resulted in Libya’s UN-recognized Government of National Accord – the interim Libyan government – to pledge an investigation into the alleged auctioning of African refugees and economic migrants.

In response to the grim circumstances endured by kidnapped refugees and economic migrants, who cross into Libya en route to Europe, Winnipegger Ben Maréga began an online conversation with friends and community members that quickly grew into a bilingual action campaign called All Against Slavery – Tous Contre L’Esclavage.

Libya is one of the main transit points for migrants attempting to reach Europe by crossing the Mediterranean. Almost 145,000 people have attempted this dangerous trip in 2017 alone. Over 2,700 have drowned.

To account for the unregulated waves of immigration, European countries such as Italy have been working to protect their coastlines by intercepting migrant-carrying boats headed for their shores while also urging NGOs not to assist stranded boats.

This has put pressure on Libyan authorities, who lack the capacity, equipment, and training to carry out policing and safe rescue on the open water

As a consequence, it is estimated that 700,000 migrants are stuck in Libya, with many being held inside hostile detention centres.

Maréga said he knows people who have attempted to migrate to Europe by boat.

“I have friends that I grew up with that have actually took that way, where they were going to Mali and from Mali to Algeria or Mauritania,” he said. “And then they would go either Morocco to try to get into Spain, or Libya to try to get into Portugal.”

Maréga said the travel impediments faced by migrants and their consequences has allowed for an increase in human-trafficking in Libya and across the region.

“Young kids who travel with their mom and dad, and then the dad is separated from the rest of the family,” Maréga said. “If he does not have enough money to pay for the rest of the travel, then he’s going to be sold into slavery.”

All Against Slavery – Tous Contre L’Esclavage

Maréga said the inspiration to create the campaign stemmed from a lack of global media attention and political action on the issue.

He attributed this to the regions’ restricted visibility in reporting.

“The people that are usually in those regions don’t have access to the internet, so there is no reporting tools,” Maréga said.

Magéra said that the campaign accounts for the insufficiency of “naive idealism” by focusing on four different axes of action.

The first axis is mobilization.

“We intend to do rallies, we intend to host marches, we want to do town halls with politicians around Canada,” he continued. “But also, we want to have synergy with all the movements that are like us.” All Against Slavery – Tous Contre L’Escalvage rallies outside of the Canadian Human Rights Museum on Saturday, Nov. 25.

To coordinate their plans with existing movements and organizations that provide the means to spark action on issues like modern day slavery, the group has connected with Black Space Winnipeg, Amnesty International, and the Canadian Museum for Human Rights.

The second axis is education and “sensibilization.” Magéra said a gathering is being planned for Thursday at Université de Saint-Boniface where professors and students will discuss the issue.

The third axis is social action, which looks toward the building connections with international organizations that have action plans similar to Magéra’s group. The fourth axis, which Magéra said is crucial, is political follow-up.

“We’ve got to make sure that we do our due diligence,” he said. “But at the same time […] we want to take it to the next step where we have organizations [and] governments that are backing up and that have the resources to make these changes a reality and that’s where we play a catalyst role.”

Hussein Abdallah, program coordinator at African Communities of Manitoba Inc., voiced his concern that human trafficking and slavery still constitute a reality in many parts of the world.

“We are standing here in 2017, reminding people that black lives matter. Why do we need to remind people? Because injustice is still around. Slavery is still around,” he said.

“Because slavery is not over. This journey isn’t over.”

Amnesty International Group 19 co-chair Humaira Jaleel pointed to Libya’s political fragmentation as the context which allows for the auctioning of men for slave labour.

“Armed groups, including some operating under Libya or Libya’s rival government, have abducted people on account of their origin, opinion, and perceived political or tribal affiliations ,” Jaleel said.

“Rising criminality in the absence of a justice system has given rise to abductions of these civilians for ransom. While waiting for their families to pay up they are kept in swamped conditions and when the ransom is not paid, they are [sold] for forced labour.”

Jaleel emphasized the role of collective action in addressing the situation in Libya.

“We don’t only ask for the rights of the group we belong to,” she said. “Any human being, any individual, any group, any community – if their rights are being abused we are hurt.”

U of M students freeze for a good cause

We must put an end to the Assad regime