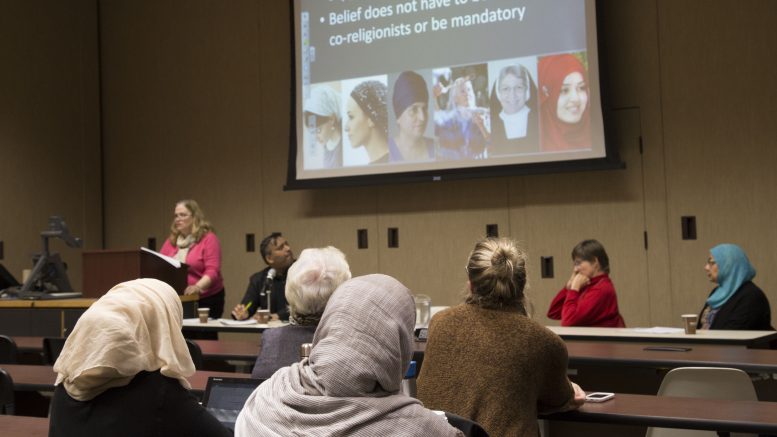 Karen Busby, U of M law professor and academic director of the CHRR discusses the right to religious freedom as a part of the panel held on the Quebec’s “religious neutrality” bill, on Thursday Nov. 17.

Bill 62 – which passed in the National Assembly of Quebec on Oct. 18 – prohibits people covering their face from delivering or receiving public services and has sowed alarm and confusion among Quebecers, particularly Muslim women who don full face-covering veils, such as the niqab or burka. Concerns have been raised regarding how and by whom this law will be interpreted and enforced.

Marches and demonstrations in protest of the bill have taken place throughout Quebec and Canada. On Nov. 7, the National Council of Canadian Muslims (NCCM) and the Canadian Civil Liberties Association filed a constitutional challenge to Bill 62, arguing the law “gravely infringes” on the religious and equality rights of Muslim women who cover their faces for religious purposes.

“Our legal challenge targets the heart of what this law really is: a discriminatory, unconstitutional, and unnecessary piece of legislation,” said executive director of NCCM, Ihsaan Gardee, “that excludes and stigmatizes an already marginalized and vulnerable minority of women and, by extension, the larger Quebec Muslim community.”

Religious freedom and the constitution

Busby kicked off the panel discussion by outlining how the Canadian constitution provides protection for religious freedom.

“Rather, what constitutional laws in Canada try to do is encourage toleration at the very least and understanding as a way of peaceful coexistence,” she added.

The Canadian Charter of Rights and Freedoms guarantees the right of religious freedom as one of the “fundamental freedoms” laid out in section 2 of the charter.

In 2004, the Supreme Court of Canada’s Amselem decision broadened the formal interpretation of “religious freedom,” defining it as a practice in where the individual sincerely feels it is connected to religion, regardless whether the practice is required by religious authority.

Busby emphasized that the essence of religious freedom can be understood as the right of any person to believe that a certain practice brings them in connection with the “divine,” regardless of whether or not the belief is shared by co-religionists or persons of other faiths.

“In many different religions women wear head coverings,” she said.

“All that matters is she believes it brings her closer to the divine,” Busby added .

“The wearing of a headscarf or a face covering or partial or full face covering is clearly protected by the right to religious freedom in Canada,” Busby continued. “There’s no controversy about that at all. So it’s pretty clear that a religious right is being affected when a woman’s ability to wear a headscarf is compromised in some way.”

Does the niqab contradict Canadian values?

Shepherd – who holds a Ph.D. in feminist theory and theology – denoted secularism as an integral feature of Canada’s core values but one that has been misinterpreted.

“To legislate against a religious dress is to turn a religiously neutral democratic secular state into what could be called an autocratic cult of secularism,” she said.

Some proponents of Bill 62 see it as a feature of secularism that supplements the natural evolution of a modern Quebec. Shepherd disagreed with this view.

“I fully support Quebec’s determination to preserve its minority francophone culture, and I also support its long and hard struggle against the domination of the Roman Catholic Church in public matters,” she said.

Shepherd said Bill 62 is a subtler version of the Parti Québécois’ 2013 Charter of Values, which argued that a secular state should ban any overt religious symbol .

Shepherd noted that what constitutes “Canadian” values is an essential area of thought that needs to be examined.

“Schools are beginning to incorporate into their curriculum the seven sacred Indigenous teachings of love, humility, honesty, wisdom, courage, truth, and respect,” she said.

“These, balanced with communal wellbeing, universal health care, gender equality, minority rights, treaty obligations, and a mosaic of ethnic and cultural diversity, are what I cherish as Canadian values,” Shepherd added. “Freely chosen choices of dress do not threaten any of these values.”

During the panel, Siddiqui argued that Bill 62 is nothing more than a representation of Islamophobic rhetoric present within the country.

A poll conducted by the McGill Institute for the Study of Canada found that 47 per cent of Canadians support banning headscarves in public and 51 per cent support government surveillance of mosques.

Another poll by the Pew Research Center found that 31 per cent of Canadians approved of President Trump’s “Muslim ban,” which imposes restrictions on travellers from Muslim-majority countries.

Siddiqui said the fact Bill 62 has passed, and that Islamophobia has been rising in Canada, “takes it beyond the legal to the human cost that we are paying today on the streets of Canada.”

Islamophobia, Siddiqui said, is best defeated when the conversation shifts towards understanding the religion and more specifically, understanding why Muslim women choose to cover their face.

“Do you really know me? Do you really respect me? That’s the question we all have to ask. I don’t want people to just say: ‘Oh, we are for human rights.’ Do you even consider me human?”

Our Scene the Movie brings hip hop to the forefront