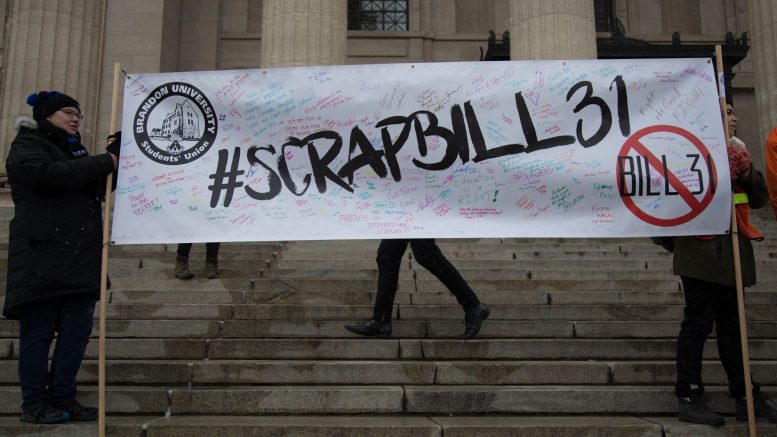 Despite strong student opposition, Bill 31 has passed its third reading and is now law.

The advanced education administration act lifts a cap on tuition hikes that has held increases to inflation since 2012 and will remove restrictions on course related fees. Universities in Manitoba will be free to increase tuition fees by up to five per cent plus inflation annually beginning September 2018.

Proceedings at the legislature were delayed for about four hours on Thursday following a sound system malfunction. Nine bills were then debated and voted on in a marathon session that lasted until 4 a.m. Friday. Bill 31 was second-last law to be voted in at 2:20 a.m.

Annie Beach, aboriginal student commissioner for the Canadian Federation of Students – Manitoba (CFS-MB), said the federation is upset the Progressive Conservative government did not listen to students’ concerns regarding the bill.

Almost 50 people spoke overwhelmingly against Bill 31 at a committee hearing on Oct. 25. This includes representatives from CFS-MB, the University of Manitoba Students’ Union (UMSU), and private citizens.

Wishart responded by saying the PCs are “working constructively with our post-secondary education institutions to make sure that we have a long-term, sustainable program,” and complemented the PCs’ “robust” Manitoba Scholarship and Bursary Initiative (MSBI) program.

Premier Brian Pallister’s single campaign promise regarding post-secondary education was an $11 million increase in provincial funding to the MSBI program, bringing the total to $20 million, $13 million of which will be raised from the private sector. Pallister pledged to fulfill this promise by the end of the 2018 fiscal year.

According to information obtained by the NDP through a freedom-of-information request, just over $1.8 million in private funding has been raised so far.

With four minutes left in question period Thursday, about two dozen students in two sections of the public gallery unfolded “Stop Bill 31” banners, released strings of signed postcards, and dropped leaflets onto the chamber floor. The students were then escorted out of the chamber.

Speaker Myrna Driedger called the students’ action “a very serious offence,” and “not something that we take lightly.”

“I am very concerned to see that happen,” Driedger told the MLAs and the gallery, “and I’m really hoping that there was no participation by anybody in this room to encourage those students to do that.”

Beach, who was among the students protesting at the gallery, said that the action was a final attempt to “try to get our voices heard right before they vote on the bill and hopefully change their minds.”

“We did as much as we could to follow democratic process and our voices weren’t being heard or valued by PC MLAs,” Beach said. “We had over 4,000 students sign petition postcards, proving that it’s not just a small group of students – it’s not just the Canadian Federation of Students that are opposing the bill.”

“We tried as much to be clear that students oppose the bill and we weren’t listened to so it’s too bad that the government doesn’t really value its students and doesn’t value the economic future of Manitoba,” she added.

Beach said now that the bill has passed, CFS-MB will take its fight directly to university administrations.

“We’ll be focusing on the presidents of the universities in ensuring that they don’t take advantage of this bill after it being passed,” she said. “So we’ll probably do more outreach at individual universities and target specific university representatives and administration.”

UMSU president Tanjit Nagra said, “At this point, we need to focus our efforts at the U of M board of governors, and ensure that we are advocating for the board to not implement higher tuition fees just because the government has given them the licence to do so.”

In January, the U of M board of governors experienced its largest one-time turnover in several years after the government appointed 11 new members to the board responsible for overseeing the administrative and business concerns of the university. 12 of the 23 positions on the board are government appointments. CFS-MB will take its fight against Bill 31 to university administrations.

U of M executive director of public affairs John Danakas said in an email that “the university is still in the process of its strategic resource planning for the upcoming year,” adding that while final decisions have not been reached, “there is a firm commitment to ensure post-secondary studies at the University of Manitoba remain accessible.”

In a release posted on UM Today in March following the Progressive Conservatives’ announcement of Bill 31, U of M president and vice-chancellor David Barnard indicated the university will take advantage of the opportunity to increase fees.

“At the University of Manitoba we have maintained consistently that increasing tuition rates to bring them more in line with those at similar universities across Canada will help achieve this goal,” of the U of M being a “modern, well-equipped, nationally and internationally competitive,” university.

Barnard added that additional funds would allow the university to provide more students with improved scholarships and bursaries and enhance programming and facilities at the U of M.

In its 2017/18 budget, the provincial government scrapped the tuition fee income tax rebate for graduates who stay in Manitoba. The tax measure, introduced in 2007 by the NDP, offered graduates up to 60 per cent rebate on the total amount of tuition fees paid over their time in post-secondary education, capped at $2,500 per year and $25,000 in total. The rebate paid out $58.5 million a year in tuition rebates.

Position of the opposition

Manitoba NDP leader Wab Kinew said the passing of Bill 31 into law is “a sign that things are going to get a little bit harder for students and their families in Manitoba.”

Calling it “the wrong direction,” Kinew added, “We’re disappointed with it but we’re also energized because we know that students need us to stand up for them that much more and so we’re committed to doing that.”

“I think that it’s sort of like a one-two punch against students because Pallister’s frozen operating grants,” he said. “So it means that there’s a ton of pressure on administrations to raise tuition by the maximum allowed under this new law.”

Universities in Manitoba had their operating grants frozen in the 2017 provincial budget at the 2016-17 level, following several years of annual 2.5 per cent increases under the NDP government. Provincial allocations this year totalled more than $363.1 million to the U of M individually and approximately $704.6 million to all provincial post-secondary institutions.

Kinew said that while he “can’t condone,” the students’ protest in the gallery, the government’s failure to engage their concerns left them discontented.

“I think this nonviolent protest that happened [Thursday] does show how frustrated a lot of students are, first of all with the tuition hikes, but second of all the fact that they came to committee to voice their opposition and it doesn’t appear that the government listened to them in any way,” he said.

“There was no amendment to the bill, there was no let’s meet you halfway from Pallister’s side of the table and so I think it just shows the frustration that a lot of students are feeling.”

“There’s always the chance to change government,” Kinew added, “and we’ve been very clear that if we’re elected in 2020, we’d repeal this bill.”

Kinew added that in addition to repealing the bill, if elected, the NDP will address other barriers facing students’ access to post-secondary education, including social and mental health barriers. Kinew reiterated his promise to commit to a post-secondary tuition fee waiver program for young people coming out of the child-welfare system.

The legislature is now on a break until Nov. 21 when the PC government will announce its plans for the coming year in a speech from the throne.

U of M takes steps toward affirmative consent

Traffic blocked in solidarity with Wet’suwet’en