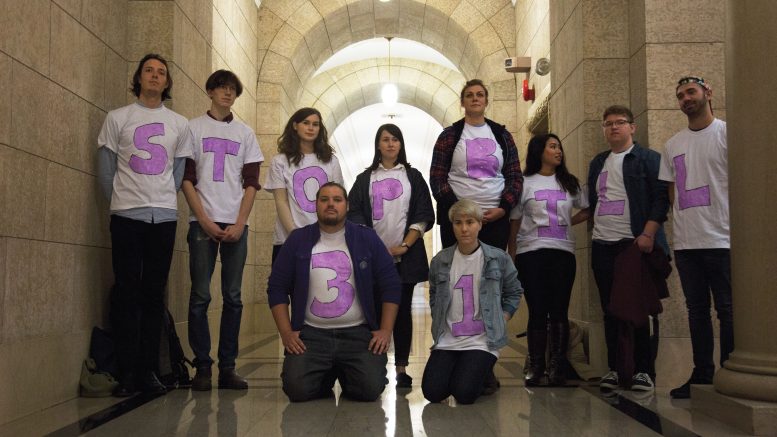 The Canadian Federation of Students (CFS) – Manitoba make their concerns visible at the legislative building on October 4th.

Nearly all of the more than 50 people registered to speak at a public hearing on Bill 31 – the Advanced Education Administration Amendment Act – last week argued against lifting the cap that holds tuition increases to inflation.

UMSU president Tanjit Nagra said a five per cent increase in tuition will have major ramifications for lower-income students.

“The reality is that these proposed changes will not make education accessible,” she said. “Scholarships and bursaries only go so far to help those who need additional support.”

UWSA president Laura Garinger spoke to the committee and said students are increasingly employed in precarious work at minimum wages and find it hard to fund post-secondary education and other associated expenses, such as textbooks and cost of living.

She noted food insecurity among students is on the rise, calling it “a concerning trend which will only be exacerbated further by increasing tuition fees.”

Calling education an equalizer, Rebeck said the proposed changes are “unfair and unjust” to students.

“MFL believes that government should work with colleges and universities to lower barriers, not enact new ones,” he added.

Nick Brown, president of BUSU, said increasing tuition by five per cent on top of inflation every year is a regressive policy that will be “punitive to students” in the province.

“This bill is the worst attack on students in 20 years in this province,” he said.

Brown argued that University of Brandon would require $2.3 million to balance it’s budget without cutting programs and faculty positions.

“The flip side to the 6.5 per cent increase in tuition is also the zero percent increase in grants that we [the University of Brandon] received last year to the operating grant,” Brown said.

UMFA president Janet Morrill said in a statement that the bill will impede the affordability of post-secondary education in Manitoba. She said tuition hikes are often followed by cuts to tenured faculty positions as administrations become increasingly reluctant to invest in full-time and tenured staff, who are replaced with “casual, term or sessional positions.”

“This is transforming post-secondary education in disastrous ways. Overworked, underpaid professors cannot offer the same quality of education to their students,” Morrill said.

Megan Linton, a private citizen and a member of the UWSA, shared her story as a survivor of sexual assault on campus.

Linton explained that creating a culture on campus where “survivors are believed and their lives are able to continue on” requires providing time off to heal and get treatment. The proposed tuition hikes under Bill-31 will make it costlier for survivors to attain post-secondary education, she argued.

“I am very confused about how this government passed Bill 15 – The Sexual Violence [Awareness and Prevention] Act – on post-secondary campuses, if they were going to pass Bill 31,” she said.

She called Bill 31 a legislation that disproportionately affects students living with disabilities, non-binary individuals, and Indigenous students as they are the most affected by sexual violence on campuses, saying “those students deserve to feel free to take a year off to heal.”

PC committee member Janice Morley-Lecomte thanked Linton for sharing her story but failed to comment on, or address, the concerns she highlighted.

The bill, introduced to the legislature in March by Minister of Education and Training Ian Wishart, will roll back legislation put in place by the provincial NDP in 2012 that holds tuition increases to the rate of inflation.

Bill 31 will permit post-secondary institutions to increase tuition by five per cent plus the rate of inflation annually. It also lifts restrictions on course-related fees. If passed, the legislation will go into effect for the 2018-2019 academic year.

Bill 31 will go back to the legislature for a third and final reading in November.