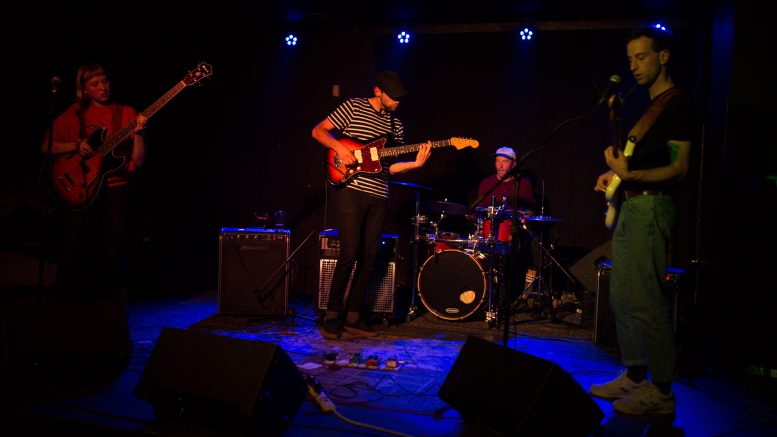 Mauno at The Handsome Daughter

Winnipeg will once again host quirky East Coast experimental pop outfit Mauno, who will be
performing Nov. 11 at The Handsome Daughter as they tour in support of their newly released
album.

Their sophomore album, Tuning, was released in Canada on Oct. 17, as the band is in the midst
of a European tour that includes stops in Germany, France, Denmark, and England.

The last time Mauno came to Winnipeg was Jun. 16 for the third stop of their Canadian tour.
“We’ve been playing and practicing constantly since the last time we were in Winnipeg,” said
singer/guitarist Nick Everett. “We’re just flatly a better band all around.”

The four-piece band formed in 2014 and is named after bassist/vocalist Eliza Niemi’s Finnish
grandfather. Since its inception, the band has released two albums with the first, Rough Master,
coming out just over a year ago.

In a press release, Mauno described drawing inspiration from the book The Soundscape: Our
Sonic Environment and the Tuning of the World, by R. Murray Schafer, their album’s title being
derived from the book’s subhead. Everett said that reading the book completely changed the
way he moves through the world, and, used sonic relationships to inspire the adventurous
quality of the new album which is accentuated with the use of field recordings from home and
away in the making of their more mature album.

The album opens with “Or Just,” comprised of a simple strumming accompaniment to an
incredibly captivating voice. With haunting qualities and an enchanting falsetto, Everett’s voice
creates and compliments layered melodies and harmonies throughout the album. There is a
striking similarity between Everett and Radiohead’s Thom Yorke in vocal tone, use of vibrato,
and composition.

“Tuning” is a mash-up of sounds that become less confusing after listening to the remainder of
the album. The tracks following it are host to a variety of misplaced sounds and field recordings
that find a comfortable home in the background, isolated in the middle, or at the beginning or
end of a song.

Instrumental complexity and melodies twisting across instruments with intricate drumming fits
together perfectly in “Hand,” and will absolutely pump you up for the rest of the album, leaving
you wondering what comes next. The songs are quite short, with the longest peaking at just
over three minutes.

That being said, the songs on the album have somehow achieved a duality of wanting them to
never end, to sitting on your hands so you don’t prematurely switch the track. The end of
“Hand” loops back to the disarray of the previous song before hopping to something entirely
different with a switch-up in lead vocals to bassist Niemi in “Other Bad.”

“Pigeon” is a particularly odd song, opening with an orchestra followed by sporadic claps and
then launching into a song that is ever-changing from beginning to end. The way the guitar
follows the vocal melody, being off only by a hair opens the ear to be particularly attentive
before introducing the entire band for a full and captivating sound.

The accessibility of the album is a great transition into more experimental music. There are
moments of complexity and intricacies that move in and out of the listener’s focus as they
compose very smart and thoughtful music that can be listened to again and again. Their live
show is no less impressive, and the live interpretation of their new roster of songs on Tuning is
awfully intriguing.

The highs and lows of Winnipeg Folk Festival