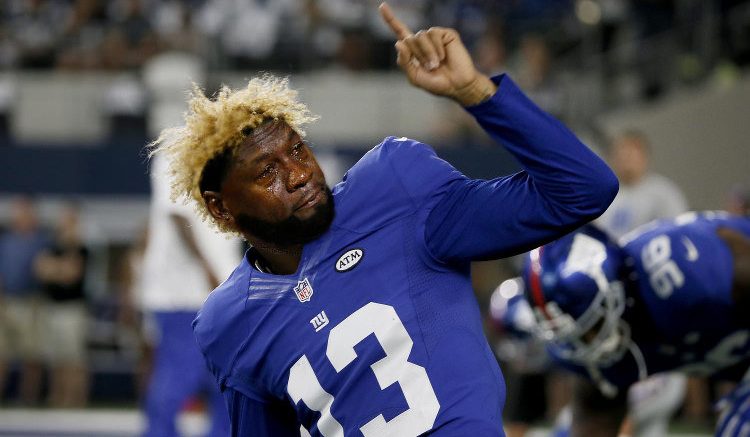 Well, students, the Fantasy Prof is back from his Thanksgiving break. I hope you had a marvelous holiday, full of good cheer and great food. I, myself, had a very enjoyable Thanksgiving. However, there was one thing that tainted the festivities for me – the loss of my prized wide receiver Odell Beckham Jr.  Yes, the heralded OBJ is now toast. I have him in two leagues. Well… had. Insert sad or crying emoji here. A few weeks earlier, in this very column, I discussed the coping mechanisms you may implement when dealing with the loss of David Johnson.  It appears I will now have to look in the mirror and apply that same advice towards my own team.

OBJ and I go back a long way. I drafted him when he first came into the league, and I’ve always found a way for him to be on my fantasy teams, either through draft or trade. To me, he is the epitome of an upside fantasy player. OBJ is not the boring, consistent player that can get you 10 to 11 points per game. He may get you four points one week, but he may get you 25 the next. Those are the kind of players I want on my team. And now he’s gone.

I actually watched the injury live. On my 45-inch television screen. In high definition. I saw the whole thing – the catch, the tackle, and then the broken ankle or fibula or whatever body part it was. Have you ever watched your star fantasy player go down right in front of you? Usually, you may see it later in highlights or PVR. But to watch the injury happen in real time is a different experience entirely. Remember when I talked about the five stages of grief?  Well, I must have passed through those five stages in an instant. When he came down injured, it was the strangest feeling. It was like I knew, in the pit of my stomach, that something consequential had just happened. In other words, I had the sinking feeling Beckham was done for the season. Surely enough, he was.

But I felt at peace with the loss. Luckily, my team is covered. Usually, what I like to do is draft four to five stud-ish wide receivers so that if something like this happens, I have insurance. But you never like to see this. OBJ could ball with the best of them. I could do without the “dog relieving himself on the football” touchdown celebration. But I will miss his explosiveness and the fear he could strike into my fantasy opponents on any given Sunday. RIP OBJ.  Until next season. And given the chance, I will probably draft you again.

Fly, Eagles, fly – Carson Wentz has gone from backup QB status to possible QB1. The dude has looked really good. And Nelson Agholor is a possible sleeper for down the stretch. Did you see his touchdown on Thursday? The burst was most notable. He passes the eye test. Think about trying to acquire him. If Agholor is on the waiver wire, snatch him up. He’s worth a stash.

Jonathan Stewart of the Panthers had minus-four yards rushing. Not just on one play, but in total. Over the entire game. Think about that. I didn’t think that was humanly possible. You can start to think about cutting bait on J-Stew.

Did the Saints-Lions 52-38 game actually happen? Or did I just play a Madden game?

Adrian Peterson clearly prefers the Arizona desert to the Louisiana swamps. Is it just me, or does Leonard Fournette just score long touchdowns? Deshaun Watson could be a fantasy league championship QB.

Time goes so quickly. We’re almost halfway through the fantasy season. Next week, we’ll point out some out studs and duds one week from now.

A guide to the 2016 Bisons football training camp

Reloading for another shot at the Super Bowl: Recap of NFL free agency