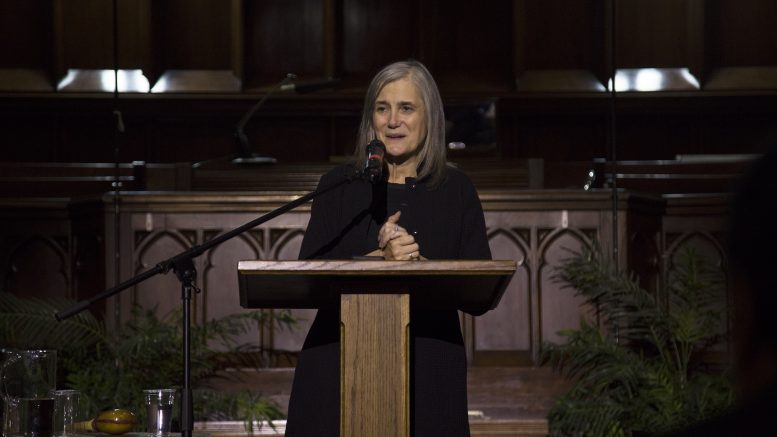 Goodman is the host and executive producer of Democracy Now!, a renowned independent news program that airs on more than 1,400 public radio and television stations around the world.

Goodman is an acclaimed journalist with many awards and recognitions. She is the first journalist to receive the Right Livelihood Award, sometimes known as the “Alternative Nobel Prize,” and was awarded the 2014 I.F. Stone Medal for Journalistic Independence Lifetime Achievement Award, among other notable recognitions.

The event, subtitled “Stories of Democracy, Resistance and Hope,” was hosted jointly by Canadian Centre for Policy Alternatives, Fernwood Publishing, Rabble.ca, 101.5 UMFM, CKUW 95.9FM, and the University of Winnipeg.

Goodman’s address to the crowd

Goodman spoke to a full audience on a broad range of topics, including the role of independent media, the politics of war, climate change, racial injustice in the U.S., and President Donald Trump.

Goodman said it is absolutely critical to see and hear the world through something other than a “corporate lens and a corporate microphone.”

“We need independent media that is brought to us by the listeners, the viewers, the readers,” she added.

Goodman explained that mainstream media is using the public airwaves as if it is their private property.

“President Trump drops the largest non-nuclear bomb in the history of the world on Afghanistan without explaining why,” Goodman observed.

The U.S. military dropped MOAB, the largest non-nuclear bomb ever deployed and nicknamed the “mother of all bombs,” on Afghanistan’s province of Nangarhar in April as a part of a military campaign to defeat the Islamic State.

“I see the media as a huge kitchen table that stretches across the globe but we all sit around and debate and discuss the most important issues of the day,” she said.

Goodman criticized Fareed Zakaria for concluding that Donald Trump “became the president” after ordering an attack on a Syrian airbase and reminded the audience of the importance of an independent media to hold those in power accountable, particularly when it comes to war, calling it a matter of life and death.

Goodman said media needs to fulfill its role and responsibility of discussing a broad range of opinions on issues critical to the people rather than acting as a “conveyer belt for the lies of any administration.”

Goodman attracted international attention for her coverage of the Standing Rock protest against the Dakota Access Pipeline in 2016. After Democracy Now! aired footage of private security contractors using pepper spray and attack dogs against the protesters, the North Dakota state’s attorney office issued a warrant for Goodman’s arrest for criminal trespassing and a misdemeanour offence in September 2016.

A North Dakota Supreme Court judge, eventually dismissed the charges. A number of Indigenous protestors who were facing felony and misdemeanour charges and scheduled to be arraigned the same day as Goodman also had their charges dropped.

According to Goodman, the dismissal of charges was a huge victory for the freedom of press. She narrated this incident to illustrate the power of a free press, arguing that her reporting on the charges brought down enough pressure to drop the charges against her and the protestors.

“Whether we are journalists or artists, doctors, lawyers, nurses, whether we are teachers, students, employed or unemployed – we have a decision to make every day, every hour of every day, whether we want to represent the sword, or the shield,” she said.

In conversation with the Manitoban

Before addressing the crowd, Goodman answered questions from local media.

Manitoban: Media ownership is severely concentrated in the U.S . and Canada. As young journalists who are trying to venture into new ways of journalism, for example online, how do we bridge the gap between being relevant, credible sources and keeping ourselves safe?

Amy Goodman: You just have to pursue your questions wherever they lead. I think there is a fundamental sense in democratic societies, and those who are fighting for their societies to be democratic, that an independent press is essential to the functioning of a democratic society.

And so as young journalists, your job is so important and it’s not even just a job, it’s a mission. A mission to open your microphone to people who are not usually heard which I think very much represents the mainstream of the society.

Whether we are talking about economic inequality, racial injustice, social injustice, I think that all of these people are not a fringe minority, not even a silent majority, but the silenced majority silenced by the corporate media which is why we have to take the media back.

M: A lot of energy projects that are coming up in Canada, such as the Site-C Dam and others, are on Indigenous territory. What is your suggestion when it comes to covering those contentious topics, especially in Canada, when we are starting to talk about reconciliation with Indigenous peoples?

AG: To go there, to cover it, to ensure that you are including all of the voices in your coverage.

This is our job and you know, Democracy Now!, we were covering the largest unification of Native Americans that our country had seen in decades. From Latin America, from the United States, the First Nations of Canada coming together in North Dakota at Standing Rock Sioux reservation to protect the land from the Dakota Access Pipeline and energy transfer partners that own it.

It’s just absolutely critical because, you know, there is a deep connection between what these struggles are all about. They are local struggles but they connect, just like these pipelines do, to global issues. And they are not just issues, you know – it’s the issue of the fate of the planet, of climate change. So each one of those is so important to hear.

I think of Winona LaDuke of the White Earth Reservation of northern Minnesota, who says ‘I am not going to spend my life fighting one pipeline after another,’ but that does seem to be what is happening.

Although there is this growing movement and growing awareness as so many people are now submerged under water, at least in the United States, that we have to do something about this. And that’s what the Native Americans have been leading the way in telling all of us.

Workers have sacrificed too much, tax the wealthy

Sanctions in Iran not the answer