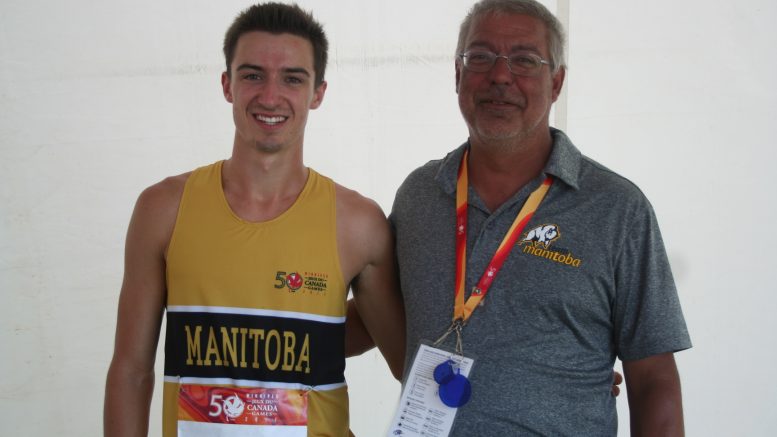 Bison track and field athlete Simon Berube (left) and his dad Claude Berube at the 2017 Canada Summer Games in Winnipeg.

Track and field success runs through the family for University of Manitoba track and field head coach Claude Berube and his son Simon.

Claude has evaluated and coached some of the all-time best athletes in Manitoba during his 21 years at the helm for the Bisons. When his son Simon started in the sport as a teenager, he provided some sage advice.

“He [Simon] started out wanting to be a long distance runner, running 3000 [metres], and now he’s realized that his potential, at the moment anyways, is 400s, 800s and then eventually to start moving up to the longer races, but right now the 800 is his best event,” Claude said.

Looking at Simon’s results over the past few years affirms the switch to the middle distances was the right choice. He’s performed well at nationals, seeing steady developments in his times.

Claude says their relationship on the track is positive, but comes with its hiccups.

“We’re good, but we’ll both admit that there are moments when we find it difficult being father-son and a coach,” he said.

“At first there was a lot of knocking heads, but now it’s smoothing out and that kind of thing, and that’s part of the relationship between an athlete and a coach and that’s obviously more difficult when it’s family.”

Now entering his third year on the Bisons track and field team, Simon continues to receive valuable tutelage from his father.

“Running is not just physical, it’s very mental also. He’s trained me well mentally, so I feel like I’m ready for every race I run,” he said.

From a coach’s perspective, Claude says the biggest change he’s noticed is in his son’s confidence.

“The 800 [metre] has improved a lot. In high school, he was breaking just under two minutes and now he’s in the low 1:50s. There’s been some big improvements there and I think it’s also come from the confidence of racing,” Claude said.

“In the past, he laid back and let other guys do the work and now he’s not scared to go to the front and push the pace and there’s a lot more confidence in his running.”

This week, the duo are part of the large Bison contingent representing Manitoba at the Canada Summer Games on their home track which according to Simon, adds a bit more excitement to the competition.

“It’s really special competing in front of my dad obviously and my whole family and friends watching. It’s a great environment,” he said. “I haven’t seen a track meet like this in a while, there’s a lot of hype around the events, so it’s fun competing here.” The Queen should not be Canada’s head of state