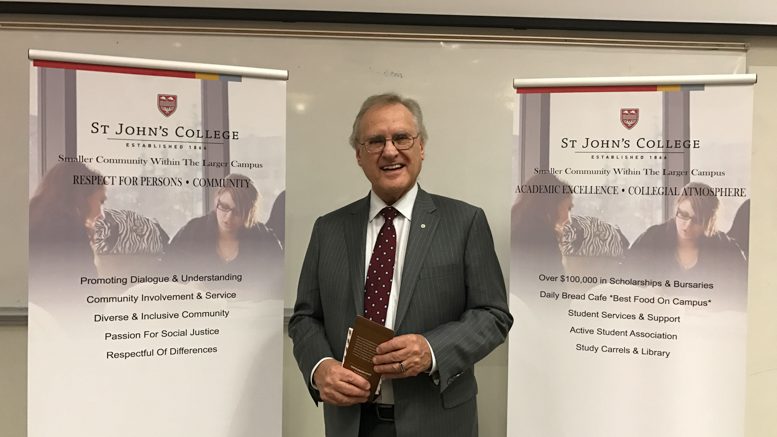 A strong voice calling for the revival of human rights spoke at St. John’s College Feb. 28 for the annual Marjorie Ward Lecture.

Stephen Lewis, a professor of distinction at Ryerson University and a renowned former politician who worked with the United Nations for more than two decades, delivered a lecture asking “are human rights eroding in the 21st century?”

The one-hour address exposed the numerous threats to human rights and their crucial effects on the quality of life for the current generation. Lewis’ speech outlined the role of the United States in the ongoing erosion of human rights and what is expected from Canada as a nation.

Lewis began with a long list of possible implications of the inauguration of a new administration in the White House, led by President Donald Trump, that is averse to the entrenchment of ideals and human rights.

“We now have a fundamentally altered landscape in the United States and therefore internationally – which is frankly terrifying,” he said.

“We have a moron in the White House who understands almost nothing about the way the world works and is not ideological except for egomaniac narcissism and accumulation of wealth.”

Lewis pointed out that they both “without naming names, made it clear how deeply offended and concerned they were about the behaviour of the president of the United States.”

Lewis voiced his concerns about the recent development in the Trump-led government to increase funding to defence while cutting foreign aid. He lamented the implications of the decision, which he said may inhibit the United States from continuing to champion charitable causes in developing countries via foreign aid.

“The president of the United States has amassed a little cabal of senior military officers around him and we are now going to begin successively to increase the defence budget at the expense of human priorities and so therefore, you have an unstable, irrational, unpredictable president,” he said.

“I see that not only are they cutting the environmental protection agencies in order to provide money for arms, but they are going to cut foreign aid. Now, maybe it is because I lived my life in that world for the past 30 years, but it is almost impossible to imagine the human havoc, the truncation and elimination of human rights that occurs when the United States – which is frequently the single largest donor – starts cutting back.”

He condemned the initial executive order on refugees, issued January, and called on Canada to stay true to the endearing values that have sustained the country for 150 years since confederation.

“I am increasingly of the opinion that what this world wants – and what this world needs – is a voice of principles to say to the president of the United States ‘you are wrong,’” he said.

“We, as a country, have a series of values and principles which we cherish for 150 years and we are not prepared to have them subdued by executive orders issued from the United States of America.”

He called on Canada to stand strong and entrench human rights.

“I don’t think any country should attempt to assuage the egotism of Donald Trump by playing nice, by shaking hands deferentially, sometimes reverentially, by pretending to accept his admonitions provided he maintain trade plans,” he said.

“Countries like Canada have to find the courage to stand up to these atrocities. As I say, it does not have to be unduly confrontational but can be uttered with respect and dignity just dissociating ourselves from the pattern or behaviour and saying to the world, ‘you want a beacon of conscience? It is called Canada.’”

Winnipeg mayor Brian Bowman was among the dignitaries who attended the event and he spoke about the efforts of his administration to make the City of Winnipeg – once called the most racist city in Canada – a place where everyone is welcomed and received with open arms.

“We try to gather community leaders and advocates who are championing various human rights to undertake the simple act of working together,” he said, citing a recent symbolic walk for human rights.

“We are continuing to provide more supports to welcoming newcomers, especially refugees, to Winnipeg. Certainly, when it comes to our Indigenous community, we are doing a lot of work right now to increase our Indigenous inclusion efforts. What we saw during the presidential campaign, some of the rhetoric that then-candidate, now-President Trump voiced were deeply offensive and certainly have empowered some groups that we would not like to see empowered.”

“And so what we are trying to do is really just demonstrate to our own citizens but also to our neighbours as well as global citizens that Canada is a place where we welcome newcomers and we value and promote human rights.”

An issue of consent