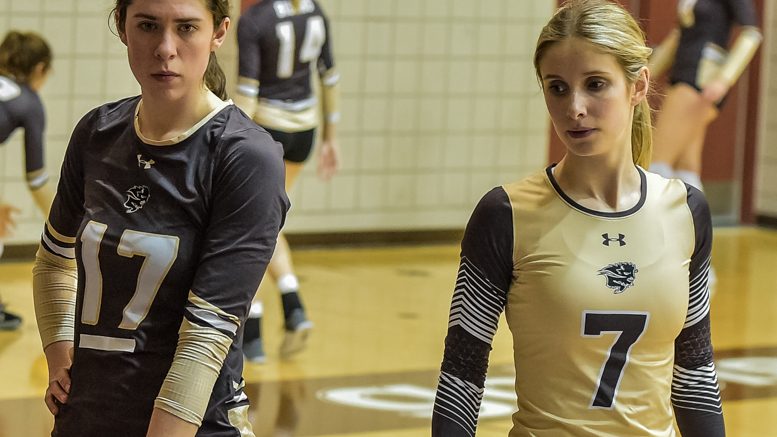 They say that all good things must come to an end, and for Caleigh Dobie and Sarah Klassen of the Bison women’s volleyball team, they saw their careers come to an end on Feb. 28 in a conference match against the Trinity Western Spartans.

Dobie and Klassen have been an integral part of the Bison women’s volleyball program for the last five years. The pair have been been dynamite on the court, whether it’s Dobie’s uncanny ability to dive for a dig to keep a rally alive, or Klassen managing to always come up with a massive block to end a set.

The two of them helped bring the women’s volleyball national championship back to Manitoba in 2014, the first time in 14 years. From the highs of a national championship, to the lows of the last two seasons and being leaders on a young, developing team, they’ve seen it all.

Playing in your senior year can be emotional, as there are many final moments, but Dobie says that you can’t get wrapped up in it all.

“It’s obviously an emotional year, but it’s an emotional year every year,” she said. “[Sarah and I] treated it as a celebration, so it was exciting when we finished something because it was another thing we have accomplished. It kept us sane to approach it that way.”

It’s hard to imagine that five years ago, both Dobie and Klassen were in similar positions as many of the first year players on the current squad.

“The first really emotional night for me was our first home game,” Dobie said. “Walking out onto that court and seeing friends and family in the crowd knowing that I had made it.”

For Dobie, being a Bison was really a no brainer for her, with her dad – Brian – being the head coach of the football team.

“I’ve always wanted to be a Bison since I can remember what university volleyball meant,” Dobie said. “When [head coach] Ken Bentley came to my house to recruit me, I remember calling him to commit [after], and my heart just felt warm.”

With Klassen, she was not expecting to be looked at by the Bisons and she recalls when Bentley came to talk to her after a match.

“I was the rural recruit. I was from Winkler and I remember being in a tournament and seeing Ken watching some of the teams,” she said.

“I remember thinking ‘who could he be possibly be watching?’ After the game my coach said that Coach Ken wanted to talk to me and it was shocking. Coming from Winkler I didn’t expect [that].”

Klassen has called being a Bison one of, if not the coolest things she has ever got to experience.

“I was really proud to be a Bison, I saw it as a privilege,” she said. “Not many people get to represent their university on that sort of scale and travel the country and show people what it means to be a Bison.”

When asked what she thought it meant to be a Bison, Klassen said it was all about putting your nose to the grindstone and working hard.

“Being a Bison just means you are willing to work the hardest,” she said. “You’re willing to put in the time, to persevere, and just grind it out. It means putting the team, the university ahead of yourself.”

Dobie and Klassen have experienced a lot together; they both joined the program at the same time, and Klassen calls winning the national title the highlight of her career.

“Winning a national championship was absolutely thrilling, definitely the highlight of my volleyball career,” Klassen said. “It’s something not many U Sports athletes get the chance to experience.”

The pair has developed a special bond in their time as Bisons, and even though both were interviewed separately, they both had plenty of words of adoration for each other.

“I love that kid,” Dobie said of Klassen. “She’s incredible. Over the years we became best friends. Sarah is intelligent, warm-hearted, the most caring person I’ve ever met. She wears her heart on her sleeve and she is one of my best friends in the entire world.”

Klassen shares the same sentiment of her teammate and best friend, citing her leadership abilities.

“Caleigh was my other half for the past five years, I don’t think I would be the athlete I am without her,” she said. “She is so down to earth, and I think being a captain is just her thing.”

Dobie will be trading the volleyball court for the tennis court, and get back into dancing.

“I want to get really good at playing tennis. I used to be a dancer for years, so I’m going to take some ballroom dancing classes,” she said. “I want to keep active and busy and do some things that over the last 13 years of playing this sport you really don’t get the time to do.”

It’ll be wedding bells for Klassen, and she is looking forward to off-the-court life after being so committed to the Bison program for the last half decade. Dobie will of course be a bridesmaid for Klassen at her wedding.

“I am looking forward to graduating, and I get the chance to get married to an incredible guy,” she said. “I’ve loved being a student-athlete, but possibly the next thing I do, to think that I could love that as well, is really exciting.”

The departure of Dobie and Klassen will be felt hard by the Bison women’s volleyball program. They are not only fierce competitors, but great teammates and leaders on and off the court. Once a Bison, always a Bison.

Manitoba earns another split in series against UBC Thunderbirds

The best in the Canada West