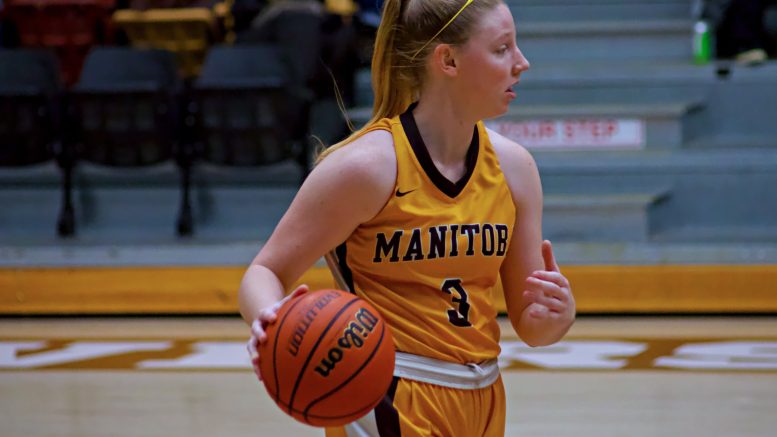 The Bisons basketball teams each played a two-game series at home against the University of Regina Cougars Nov. 12 and 13. The women’s team lost both games and the men’s team finished 1-1 on the weekend.

The women’s team got off to a rough start. The U of R gained an early lead in the first quarter. Employing a 2-1-2 press, the Cougars were able to throw off the Bisons’ offence, scoring 16 points off turnovers. The Bisons also shot poorly on Friday, going 19-71 from the field compared to the Cougars, who went 23-67. Bisons guard Taylor Randall scored a team-high 17 points but was unable to match the Cougars’ Faith Reid. The fourth-year guard knocked down 22 points en route to her team’s first win of the Canada West season.

The Cougars had a rough start to their season after being swept two weekends in a row, first at the hands of the University of Winnipeg and then to the University of Saskatchewan. Reid said she and her team learned a lot from those first two games, helping them come together to win their first of the year.

“We knew we needed to come in here and play well, and I think we […] learned some lessons from our games before and just kind of executed,” said Reid.

Reid also credited her teammates for helping find her in open areas, allowing her to pull up and drain shots.

“I think we just moved the ball well, [I] couldn’t have done it without my teammates, you know, when we moved the ball, we just get open shots and I was just able to knock some down today.”

In game two, the Cougars continued their dominant play. After finishing the quarter with a three-point lead, the Cougars would put up 15 points in the second, finishing the first half with a 12-point lead. The third quarter saw end-to-end action from both teams. The Bisons appeared to solve their shooting woes, going 50 per cent from the field in the quarter. Even so, the Cougars continued to score at will. Jade Belmore scored 10 points in the quarter to maintain the Cougars’ lead. In the fourth, Bison Deidre Bartlett attempted to cut the team’s deficit by draining a couple three-pointers while Emerson Martin and Taylor Randall both scored on drives to the rim.

Unfortunately for the Bisons, it was not enough to catch the Cougars. Belmore finished a monster performance scoring 28 points and nabbing 11 rebounds, leading her team to a 77-62 win.

Saturday’s loss was the herd’s fourth of the year, keeping the team winless so far on the season. The week prior, the U of M lost its first two games of the season to the University of Winnipeg Wesmen, 91-62 in the Bisons’ home opener and 86-64 at the Duckworth Centre.

The Bisons men’s team narrowly won game one 70-66. After trading leads throughout the game, the Bisons would take over in the fourth quarter. Mason Kraus would drain back-to-back three-pointers to lengthen the Bisons’ lead, and Tito Obasoto kicked off a two-minute seven-point run with a three-pointer in the final few minutes of the game to help clinch the Bisons’ third straight win of the season.

James Wagner was the player of the game for the Bisons, putting up 19 points for the herd.  Although the Bisons were undefeated to start the season, their 3-4 exhibition record was not reassuring heading into the Canada West schedule. Wagner said he and his teammates have learned a lot from their preseason and have applied their new knowledge to the regular season.

“We had a pretty rough preseason,” he said. “I think, you know, we had a little bit of time to come back and practice and learn.

“I think we kind of addressed our weaknesses and, you know, we’ve really had a head of steam going into this season.”

Unfortunately for the herd, game two was not as successful. Three-and-a-half minutes into the second quarter, the Bisons found themselves in a 15-point deficit. Bisons guard Elijah Lostracco drained a pair of threes and forward Cameron O’Hara posted up six points, helping the Bisons fight back and regain the lead. Both teams would continue going back and forth in the third, exchanging baskets throughout the quarter. In the fourth, the Cougars would take over. After a Keiran Zziwa three put the Bisons up by five, the U of R would go on a dominant 17-0 run, fueled by slick jumpers from Benjamin Hillis and Matt Barnard, capped off by a thunderous slam dunk by Cougar Nick Barnard.

The Bisons attempted a late comeback but ran out of time, resulting in its first loss of the Canada West season 77-68.

The Bisons men’s and women’s teams will look to rebound Nov. 26 and 27 when they play the Brandon University Bobcats at home.

Browne fitting in as a Bison