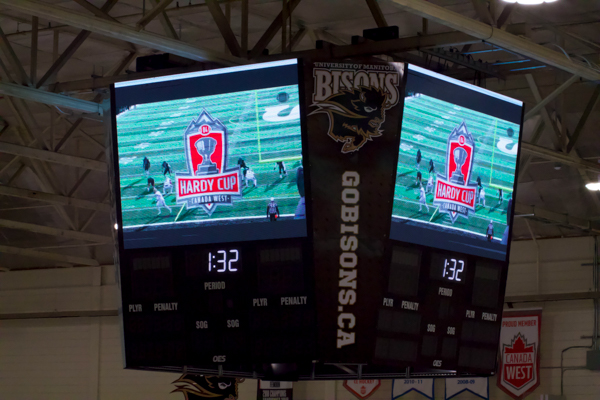 The University of Manitoba Bisons football team faced off against the University of  Saskatchewan Huskies in the Hardy Cup final on Saturday, losing 17-45 to the Huskies in a disappointing ending to an otherwise successful season for the Bisons.

The team earned the right to play in the final after taking down the University of Alberta Golden Bears by a whopping 43-17 the week before.

Despite the massive effort exerted by the team on the field, the  final score was not the one that second-year player Collin Kornelson and the rest of his team wanted.

“Overall, I think we really progressed as a team this year,” Kornelson said.

“We had great chemistry on and off the field which really helped us produce. Obviously, we did not get the final result that we wanted, but I am extremely proud of this team.”

Although Kornelson and the Bisons failed to bring the Hardy Cup back to Winnipeg, they do have many reasons to be proud.

They finished off the season with a 3-1 home record. Not only is this a great record, it left the home crowd extremely happy throughout the year.

The squad also kept improving throughout the year. Their second-place finish this year is better than their 2019 finish, where the team lost in the semi-finals to the University of Calgary Dinos.

With the 2020 season cancelled due to COVID-19, it was important for the team to have a good year, and it all started with personal growth for the players.

“In my second year, I didn’t really want to work on anything in particular,” Kornelson said.

“My personal goal this year was to become an overall better player. With football being cancelled last year, it was important to come into this year strong and ready to go.”

It was a tragic year for the Bisons off the field, after the passing of coach Scott Naujoks in September. Kornelson said that the spirit of Naujoks was with the herd when they took to the field Saturday.

“It was definitely a year of ups and downs for the team,” Kornelson said.

“The passing of coach was one that was tough to swallow for the team. He was with us in our final game and we know he would have been proud.”

Although the year is over for the Bisons, the work does not stop.

The team will be back in the gym and back on the field as soon as they get a chance. A winner’s work ethic creates a winner in the end. Kornelson says he and the rest of his teammates are already preparing for next season.

“The goal is to just get back to the field and the gym and get ready for next season,” Kornelson said.

“We have the pieces to the puzzle, but we have to put it together at the right moment. I am very excited to be a Bison.”

Bisons track and field season off to great start