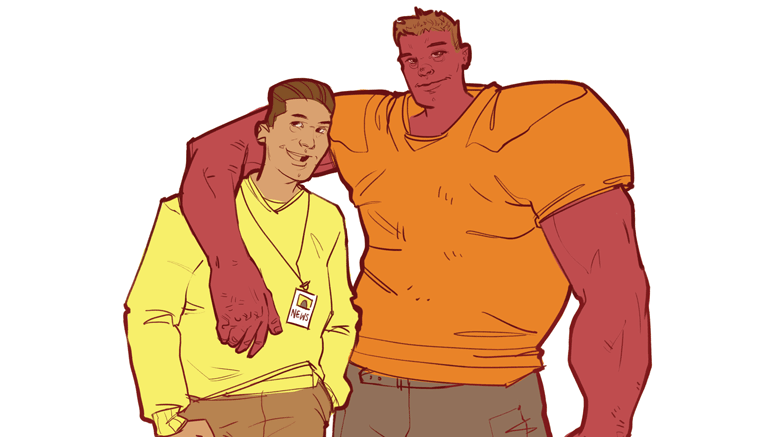 With the 2015-16 publication year and my time at the Manitoban both coming to a close, now seems as good a time as any to share some of the experiences and lessons I’ve learned during my three years as a sportswriter for the ’Toban. My hope is that any prospective students out there who are considering a career as a sports journalist may take a few of these pointers to heart and learn from them.

When I began as a sports reporter in 2013-14, the only head coach that I’d ever talked to before was Brian Dobie from the football team. I’d always had a passion for Bison sports, but I had never needed to speak to any of the bench bosses as a fan. Along with my introverted and shy personality, I was pretty nervous when the football season ended and I had to interview a coach from a different sport. What benefitted me the most was a simple concept: preparation.

It’s not necessarily about impressing the coach with your knowledge; it’s more about showing them that you’re dedicated to covering their team and that you’re passionate about that. The more they see you and the more work you put in to get to know them as well as their team, the easier it will become to form a positive relationship.

I can look back now with pleasure knowing that I connected with the vast majority of coaches here at the U of M, but better than that, I was also able to quell my social anxiety.

Never turn down an assignment

I vividly recall a conversation I had with my editor in early November of 2013, when he told me I would be covering the Bison basketball teams. At that point, my knowledge base on the sport wasn’t very expansive. Sure, I followed the game and had seen the squad play, but I didn’t have an in-depth understanding of the x’s and o’s. I could have easily told him I wasn’t comfortable doing that, but I decided to take the assignment instead – it turned out to be one of the best decisions I ever made as I fell in love with the sport and also met some amazing student-athletes along the way.

During my time, I covered every single Bison sports team. You have nothing to lose by branching out of your comfort zone and doing the same. Sure, it’s going to take a few weeks to get the intricate details of certain sports down, but once you’ve got that you’re good to go. Your portfolio will also be diversified when you ideally obtain a job in a newsroom, or as a TV or radio personality, which is never a bad thing.

During both of my first two years at the paper, I stuck to simply writing and didn’t try my hand at colour/play-by-play for Bison sports or any form of video production. Knowing that I would be applying for grad school this year, I decided to experiment with each of the latter forms of multimedia, which resulted in monumental success as I found a love for being behind the camera.

Sports journalism is changing. You need to be able to do more than just write in order to land some of the more prestigious jobs out there and slowly move up the pecking order. Your viewpoint will also change when you return to writing articles, as you tend to study the game at a higher level when you’re on a live broadcast.