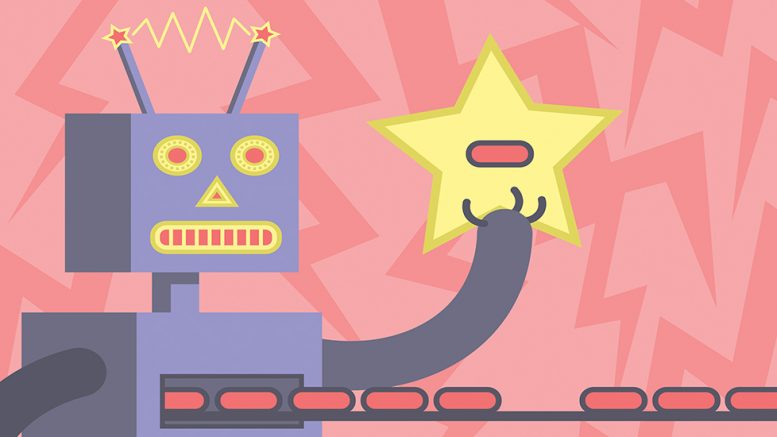 This robot is coming to steal your job. Graphic by Kelly Campbell.

When it comes to depictions of futuristic societies in film and literature, science fiction nigh unanimously errs on the side of dystopia. So too do pundits – and nearly half of young people in developed industrial economies, according to a 2016 poll by Future Foundation – when the topic of automation of the labour force is discussed. Indeed, headlines often blare job losses to technological innovation in numbers that seem impossible: one 2016 report by the Mowat Centre, a public policy think tank, declared that a little over 40 per cent of Canadian jobs are highly vulnerable to automation in the next 10 to 20 years. And while high-risk occupations also tend to be low-income, illustrious STEM fields (science, technology, engineering, and mathematics) have also become increasingly susceptible to creeping automation due to some of the repetitive task-based elements that come along with high degrees of specialization.

While this isn’t the Terminator’s famous Skynet scenario, the prospect of large-scale unemployment at the hands of robots may understandably foster hostility and anxiety in the minds of today’s modern precarious worker, or alternatively, precariat. Another major factor in this potential discontent is the current status of social infrastructure in Canada and the West at large, which is frankly failing.

Unions have been falling both in terms of strength and membership since the eighties, and benefits for both the employed and unemployed have been subject to continual downgrades over the past few decades. Employed workers have seen their benefits shrink due to the spread of the “gig economy,” which has replaced traditional full-time employment and all the security alongside it with much more turbulent, part-time contract work. Meanwhile, the vast majority of the unemployed have seen their safety net shredded. In the past 40 years, the distribution of employment insurance has been halved, covering only 39 per cent of unemployed Canadians in 2016 as opposed to 82 per cent in 1978. At large, both local and global labour markets have become characterized by precarity.

It is speculated that the new “digital economy” will only exacerbate these woes. However, such a conclusion rests on premises of maintaining the ideological status quo: the assumption that labour regulations will continue to benefit owners at the expense of labourers. But rather than becoming mired in cynicism, we must at least attempt to summon the political will to change the course of the future for the better. That is to say, the automation of the workforce need not be a looming dystopia, but instead could be a gleaming utopia – so long as the weaknesses in our social infrastructure are addressed.

Fears surrounding a robotic invasion of the workforce are largely influenced by the trenchant grip of late capitalism on modern society. With certain measures in place, mass automation of the labour force is not only permissible, but desirable: a pursuit worthy of all the political capital the left can muster.

A priority of any government allied both to the modern day labourer and economic automation should be the implementation of a robust universal basic income. Specifically, one with a progressive index that scales back the payable sums the higher a recipient falls on the income bracket. This is in order to ensure that those who are temporary or permanently displaced from the workforce can continue to live a reasonable lifestyle, and as a result are able to continue engaging in the economy.

Secondly, all industries that provide the infrastructure for automation must be nationalized. Otherwise, income inequality would soar as capitalists reap massive profits as staffing costs vanish altogether from budgets. To allow private holdings in critical industries of the digital economy would spawn a superpowered class of robo-capitalists, consisting of those who own the intellectual property rights to automation technology and those who own the companies manned not by salaried but automated workers. It would be naïve to think the ensuing economic boom in the private sector wouldn’t translate to a monopoly on political power.

Through nationalization, we can ensure that the fruits of automation are distributed appropriately and equitably. Not only would extreme class stratification be prevented, but re-energized profit streams on an unprecedented scale raised from booming business will fund a universal basic income scheme among other additions to the welfare state. These will include comprehensive skill-building programs needed for the maintenance of a smaller but more diversified economy as well as the resources necessary to integrate coding curricula into the education system. Both would be necessary for the maintenance of economy-wide automation.

With such measures implemented, a reduced workload becomes one of the stepping stones to enlightenment. Freed from the monotonous drone of an all-consuming work week, workers subject to automation will be displaced not only from their jobs but from being cogs in a machine. With widespread automation, once-workers will be able to invest in their creative pursuits, their relationships, and meaningful projects that genuinely attract their interest. Even those who wish to continue as career-driven will be free to do so without repercussions, as the types of employment primarily requiring human capital will be dynamic, complex, and richly engaging. Of course, this is all ideal speculation. Nevertheless, the chance of this never coming to pass ought not to dissuade our pursuit of what could be.

The drawbacks to automation on a mass scale stem not from the innovation itself but rather from the fact that modern social systems are woefully unequipped to deal with the upheaval that would follow from what is essentially an economic revolution. The welfare state in its current form does not have the resources to effectively cope with the aftershocks of widespread automation of the labour force. As the economy undergoes paradigm shifts, so too must public policy and the discourse surrounding it. Should we successfully reimagine the boundaries of this debate, past the neoliberal confines of free markets and small government, then society as a whole will reap the benefits. In terms of progress, the alternative simply does not compute.

Police militarization on the rise

Getting serious about male-on-male violence