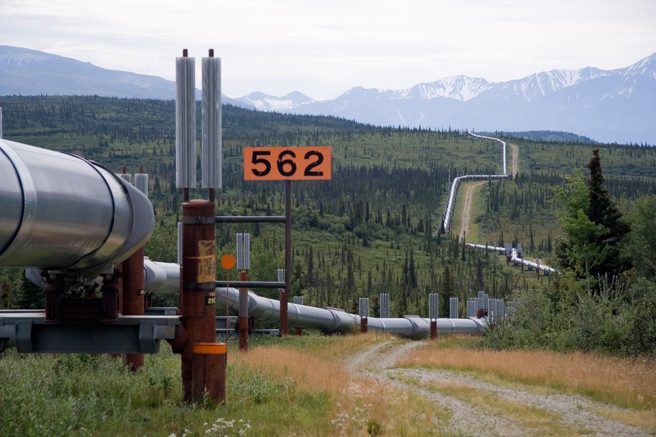 After the disastrous 2016 American presidential election, speculation on what the world should expect from a President Trump were tossed around between experts on the nightly news, opinion articles, and social media feeds, one of which was the prediction that Donald Trump would bring back the Keystone XL pipeline project.

And indeed, within days of his presidency, Trump is doing what leaders around the globe rarely do: actually fulfilling the promises he made as a candidate, delegitimizing the democratic process and signing a series of executive actions – both executive orders and presidential memoranda – including an executive order to clear the way for the Keystone XL and Dakota Access oil pipelines, both of which have been halted by the previous Obama administration in response to immense opposition from Indigenous and environmental activists.

The revival of the Keystone XL pipeline, specifically, has been applauded by our government. Prime Minister Justin Trudeau is strongly in favour of building Keystone XL, citing its great potential for economic output.

If built, the $8 billion Keystone XL pipeline would stretch from Alberta’s oil sands all the way to U.S. oil refineries located on the American Gulf Coast. This 1,897 kilometre pipeline would transport 830,000 barrels of crude oil a day and will run on top of underground reservoirs that provide water to millions of Americans, including many Indigenous communities.

Trump’s executive memorandums and Trudeau’s support came only days after 200,000 litres of oil spilled on First Nations farmland. When asked about the leak last Wednesday during a town hall in Saskatoon, Trudeau gave the same vague answer he’s been dishing out during most of his town halls, including at the recent town hall held at the University of Winnipeg. Trudeau danced around the question, claiming that while Canadians expect the government to expand the economy and create jobs through building pipelines, Canadians also expect a high level of enviro nmental responsibility.

Contradictory statements aside, the case for job creation continues to be one of the biggest and repetitive claims made in support of building pipelines. During a press conference held in Calgary last Tuesday after a federal cabinet retreat, Trudeau pressed on the importance of pipelines for job creation. So too did Jim Carr, the minister of natural resources, who expressed his optimistic reaction in regards to Keystone XL, claiming this pipeline project will create up to 4,500 jobs for Canadians.

The more this is repeated, the more it rings true to our ears. However, the case for job creation in support of pipeline building is false.

These jobs are also temporary – as in, they will no longer exist once the pipeline is built. After its construction phase, the Keystone XL pipeline will create only 35 full-time permanent jobs and 15 full-time temporary positions. This is because in addition to not creating long-lasting jobs, pipelines don’t require much labour to operate long-term.

It is not plausible to continuously claim that Keystone XL, among other pipelines, is an effective and sustainable way of creating jobs for Canadians. All we are doing is trying to numb and momentarily stabilize the issue of unemployment instead of successfully attempting to prevent it in the first place. Opting for pipelines is not only environmentally destructive, but is also economically shortsighted.

Instead of leaning on the illusory hope that pipelines will help pull the Canadian economy back on its feet and bring down unemployment rates, we should adopt policies that seek to eliminate and prevent the issue of unemployment in the first place. It’s been done before and it can still be accomplished.

During the 1970s oil price shocks, the Swedish government sought to increase employment by pursuing policies that targeted barriers to employment. This included recreating school curriculums to provide special courses developed by both the local labour market boards and boards of education. They also implemented effective monetary support mechanisms and established employment services that intensified placement efforts for young people.

Federally, Canada would do well to mimic a 1970s experiment by the provincial NDP government. Between 1974 and 1979, the government enacted a policy known as “Mincome” which issued a universal basic income to residents of Dauphin, a northern Manitoba town. The program virtually obliterated all stigma and barriers attached to members of the working poor by mandating that each and every citizen would receive monthly cheques – in total, it amounted to nearly five times the average Statistics Canada claimed that low-income workers earned.

Rather than making a tradeoff between the environment and meagre economic activity, the federal government and its provinces ought to invest in a truly productive economy by giving each and every citizen the financial means to seek stable employment, that which would generate actual growth. Oil-mongering will only continue the trend of corporate executives reaping massive profits while the working class finds itself job hopping within the confines of precarious employment.

Canada can and should adopt policies that contribute to raising our employment rate without resorting to brutalizing our environment. The mistaken premise that these pipelines are a good investment for job creation is delaying the necessary transition to clean, renewable energy that our economy needs and environment deserves.