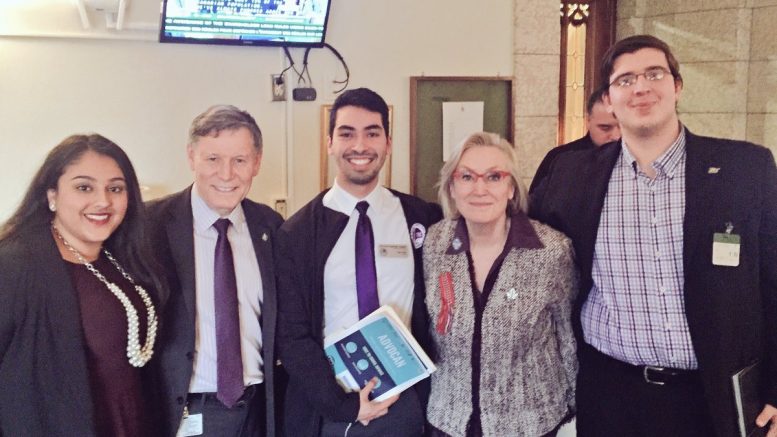 The federal standing committee on finance has recommended the government remove a two per cent funding cap placed on Indigenous and Northern Affairs Canada’s Post-Secondary Student Support Program (PSSSP) in the Liberal government’s next budget.

The recommendation came in a report from the finance committee in December, just weeks after ADVOCAN, a group of seven student unions including the University of Manitoba Students’ Union (UMSU), travelled to Ottawa to lobby for the cap lift.

The PSSSP was set up in order to “improve the employability of First Nation and eligible Inuit students by providing them with funding to access education and skills development opportunities at the post-secondary level,” according to its official webpage.

The program provides hundreds of millions of dollars in scholarships and bursaries to Treaty and Status First Nation and Inuit post-secondary students every year. In 2013-2014, $322 million was invested in the program, providing funding for more than 22,000 students.

Following her trip to Ottawa with the other ADVOCAN representatives, UMSU president Tanjit Nagra said she feels it is important the cap is lifted for the government to fulfill its goals in reconciliation with Indigenous communities.

“I think our Indigenous population and our young people need support going to post-secondary institutions,” she said. “At the end of the day, I think that if we want to honour reconciliation and move down that path, we need to support where it’s needed.”

The two per cent cap on funding increases was placed on the program in the 1990s by former Liberal finance minister Paul Martin. Since then, the program has seen an 18.3 per cent decline in the amount of students it supports, the CBC reported in September.

During their 2015 federal election campaign, the Liberal party promised to lift the two per cent cap and add $50 million a year to the program. That promise was not included in last year’s federal budget.

While in Ottawa, ADVOCAN representatives met with more than 50 members of Parliament to lobby for the removal of the cap in the next budget, including Carolyn Bennett, the minister for Indigenous Affairs and Northern Development.

Nagra said that although the meeting with Bennett was brief, she believes it was productive.

“I think that [Bennett] was very happy that we were there, advocating for that,” she said. “Even though we only had a short time with her, I think she was pretty receptive.”

The recommendation from the standing committee on finance does not include any specifics on how much funding to the PSSSP should be increased, only that the two per cent cap should be lifted.

The next federal budget is expected to be released in March 2017.

Say no to the U-Pass