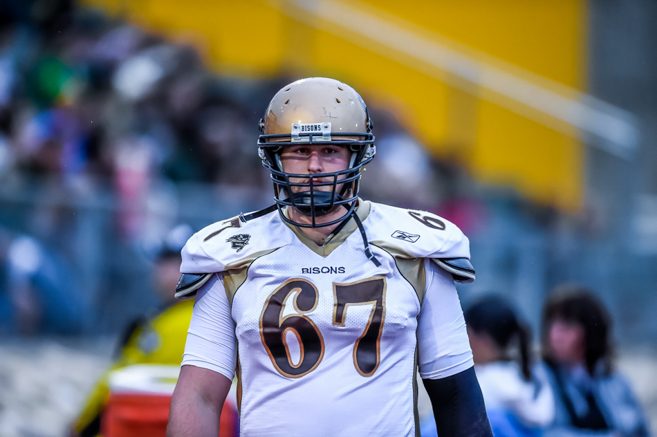 Geoff Gray has been a key member in the Bison offensive line this past season, so much so that he is currently ranked fifth by the CFL Scouting Bureau for the 2017 draft. Gray also played in the prestigious East-West Shrine game in Florida a couple weeks ago. Gray was one of the two U Sports representatives at the game, as he was joined by Laval’s tight end Antony Auclair.

Gray is the fifth Bison to attend the event down south, as he joins the like of current NFLer David Onyemata, who attended last year. The list also includes former Chicago Bear defensive lineman Israel Idonije, defensive lineman Evan Gill of the Hamilton Tigercats, and 1991 CIS lineman of the year Jason Rauhaus.

The 22-year-old native of Winnipeg was named a Canada West all-star this past season, as well as being named the conference’s best down lineman. He was also named a U Sports All-Canadian. Gray has never missed a game due to injury during his time with the Bisons, and has dressed in a total of 32 conference games. He has shown his ability to play different positions on the offensive line, as he has played as a right guard, right tackle, and left tackle.

The East-West shrine game is the longest running university all-star game in the United States. It has been going on since 1925, and was originally started to raise money for the 22 Shriners hospitals in Canada, the United States, and Mexico. Seventy players from last season’s game signed contracts with NFL teams, including Manitoba’s Oneymata, after he was drafted in the fourth round by the New Orleans Saints.

Gray talked about his experience playing at the East-West game at a press conference last week.

“Football down there is unlike anything I’ve experienced up here [in Canada],” he said. “The way it’s organized, the way it’s run, just so much more meaning to everything. It was a lot to take in, but I really just tried to focus on the football.”

The six-foot-six lineman thinks that his performance at the game helped his stock with the NFL scouts down south.

“I definitely think what I did down there improved my [stock],” Gray said. “There was a lot of scouts who weren’t familiar with me or hadn’t seen my film. All the feedback I got was really positive.”

The game was a good opportunity for Gray to meet some of the NFL scouts in attendance.

“This was the first time any of them met me face-to-face,” he said. “Different teams were more familiar with me than others, but that’s just the nature of it.”

Gray hopes that playing in this game gives him a chance to be drafted by an NFL team, but is not putting all his eggs into the draft basket.

“It would be nice for it to lead to me being drafted but you never really know,” he said. “There’s a lot that can happen until [the draft]. That’s the end goal, but I can get on an NFL team a number of different ways.”

The NFL draft is a few months away, scheduled to take place in Philadelphia on April 27-29 where Gray could potentially be selected. The CFL draft will take place a couple weeks later in May, where Gray will most likely hear his name called.

Reloading for another shot at the Super Bowl: Recap of NFL free agency

The spoiled brats of the NFL