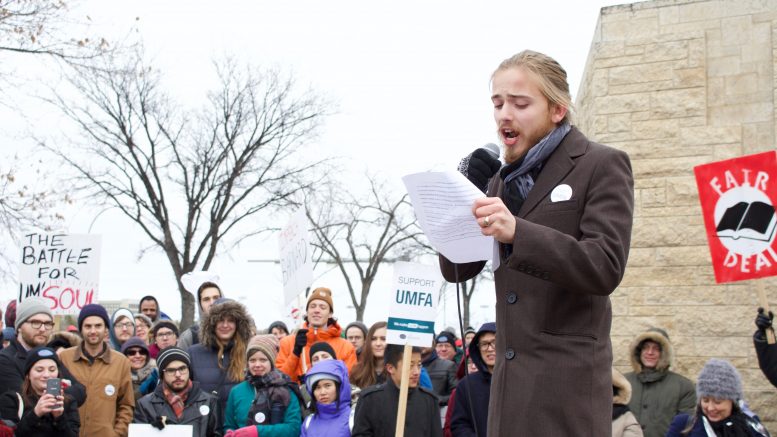 Roughly 200 students joined the picket line and marched into the U of M administrative building as a show of support for the striking University of Manitoba Faculty Association (UMFA) Friday.

Students joined the picket at Chancellor Matheson Avenue and Pembina Highway and representatives from UMFA, UMSU council, UMSAN, the Canadian Federation of Students-Manitoba, and students at-large addressed the crowd before a large group of students and faculty marched toward the administration building.

Once there, a group of nearly 200 students entered the building and recited anti-administration chants for nearly 15 minutes before leaving.

After calling on individual faculties’ student associations to develop their own positions in the first week of the strike, UMSU passed a motion Nov. 10 affirming its support for UMFA’s demands concerning workload assignments, childcare, protections against the use of performance indicators, and job security for librarians and instructors.

The motion called on the union to organize the day of action to join UMFA on the picket lines as a show of support.

All four UMSU executives were attending the Canadian Federation of Students (CFS) annual general meeting in Ottawa and did not participate in the rally. Elizabeth McMechan, a women’s and gender studies student and member of UMSAN, said UMSU’s decision to support faculty was laudable and a step in the right direction.

“I’m very proud of UMSU,” she said. “I think that this whole rally that they collaborated with us to organize is amazing and we’re really excited that UMSU is willing to work with us.”

Saif Baloch, international students’ commissioner for the Canadian Federation of Students-Manitoba, said the university has failed to set quality education as its top priority.

“Our university has been treating students as consumers,” he said.

“Education is not being prioritized at the moment. The university is rather focused on capital expansion instead of paying attention to education.”

McMechan said that even though the strike meant being out of classes temporarily, UMFA deserved all the support they can get.

“When your professor gets back to you on your email at 1:30 in the morning, or you don’t get your test back for a couple of weeks, these are all signs of overworked professors – a sign that our university is being corporatized,” McMechan said.

Cerah Dube, a criminology honours student, said the quality of education offered at the U of M was on the line with the strike.

“The class sizes have been increased so much it makes it difficult for me to access my profs,” she said. “The feedback I get on my assignments, I’ve noticed there’s less comments because the profs have so much to do.”

Dube added that, contrary to the belief some students had that striking faculty members were acting based only in self-interest, she sees the opposite as true.

“There is this misconception that profs are not working towards getting us back into class,” she said Friday. “I don’t think that’s true at all. I don’t think anyone wants to be out here picketing in this weather.”

Baloch said strikes are an effective measure for ensuring fairness for workers and the strike has considerations beyond the U of M.

“It’s okay to be selfish when it comes to your education,” he said. “But the way I see it is that strikes and unions are very crucial for a socially just society.”

Libyan students feel effects of revolution from miles away