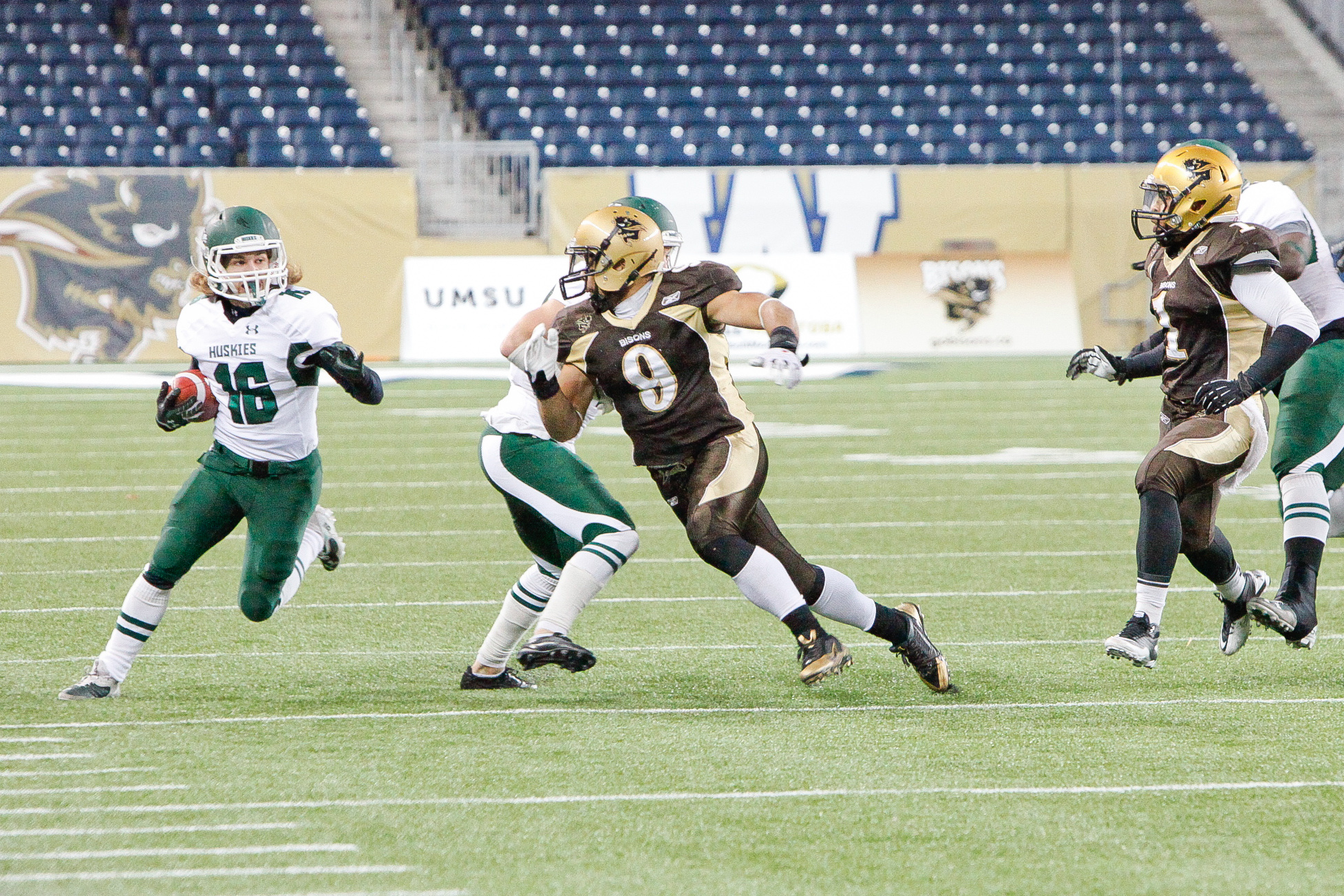 The Manitoba Bisons secured their first playoff win since the 2007 Vanier Cup championship season, after a heart-stopping 37-36 come-from-behind victory over the 10th-ranked Saskatchewan Huskies this past Friday night at Investors Group Field.

This was the third time the two teams met this season. Saskatchewan won the first game, 36-34 (Sept. 7), and Manitoba the second, 33-26 (Oct. 18). Both regular season games were nail-biting finishes. The playoff matchup was no different, with the game ultimately decided on the final play.

The game got off to a slow start, as both defences limited the point production of either side. The early difference was two Saskatchewan interceptions. The second, from linebacker Dylan Kemp, resulted in a 32-yard field goal from kicker Denton Kolodzinski – the only points scored in the first quarter.

Manitoba got things going in the second quarter, scoring three times while taking the momentum heading into halftime. They cracked the scoreboard on each of their first two series, capping an 11-play 58-yard drive with a 42-yard Nick Boyd field goal. Their second possession led to a 16-yard Anthony Coombs touchdown reception, the first major score of the game. Manitoba widened their lead to 17-3 with 2:03 remaining, as quarterback Jordan Yantz found fellow team captain Andrew Smith on a 29-yard touchdown pass. The Bisons gave up a team safety with 50 seconds left, but looked strong heading into halftime up 17-5.

Saskatchewan came out roaring in the third quarter, outscoring Manitoba 17-0. Their passing game opened up, as the Huskies slowly started to pick apart the Bison secondary. Huskies quarterback Drew Burko made the biggest impact, throwing for 217 yards and two touchdown passes. The Huskies scored on their first drive of the second half with a 61-yard touchdown reception by Kit Hillis. After a Manitoba punt, Saskatchewan cracked the scoreboard again, this time off a 43-yard Kolodzinski kick. The Huskies took the lead on their next drive, as Burko found Mitch Hillis on a 10-yard touchdown reception. The key play was a 27-yard grab by Mitch Hillis, who found a rhythm with his quarterback. Heading into the fourth quarter, the Huskies led 22-17.

Things didn’t look good for the Bisons to start the fourth, as Burko connected on another massive touchdown pass—50 yards to receiver Mitch Stevens—on Saskatchewan’s opening drive. Manitoba, however, answered right back, as Yantz completed two big passes. The first was a 46-yard gain to Matt Sawyer, and the second, a 39-yard touchdown to Nic Demski, who would factor enormously in the fourth quarter. Saskatchewan showed no signs of slowing down. They scored again on their next drive, on a 46-yard touchdown reception by Mitch Hillis. The scoring drive gave Saskatchewan their second 12-point lead of the game with just under 10 minutes left to play.

Cue the Manitoba comeback. After both defences came up with key stops, the Bisons were able to reach the end zone with 5:02 left. Demski hauled in his second touchdown of the quarter from 13 yards out. Yantz was able to spread the ball effectively on the drive, hitting Smith and Coombs with gains of 17 and 15 respectively.

Manitoba got the ball again with 2:59 remaining. The Bisons engineered a seven-play, 65-yard drive. Demski’s third touchdown reception was a phenomenal 32-yard grab with a Huskies defensive back draped all over him. The touchdown put Manitoba in front 37-36, their first lead of the fourth quarter. The Bisons went for two but were unsuccessful.

It all came down to Saskatchewan’s final drive of the game, the Huskies taking over with just 1:17 remaining after the Bisons’ go-ahead touchdown. Needing only a field goal to win, the Huskies drove the ball down to the Manitoba 32-yard line, and looked poised to pull off a last-second victory. The energetic Manitoba fans had something to say about that as the cheering of the announced crowd of 2,242 reached deafening levels, resulting in a costly Saskatchewan procedure penalty. This pushed Kolodzinski back five yards from the 39 to the 44. Kolodzinski shanked the kick, ending the game and sending Manitoba to the Hardy Cup.

Head coach Brian Dobie was pleased with the resiliency his team showed, especially in the second half.

“Saskatchewan scored 24 unanswered points on us tonight. Most teams in the country—not all, not the elite teams—fold at that point. That’s human nature,” said Dobie. “But as I said to our guys, Laval wouldn’t fold, Calgary wouldn’t fold. Western wouldn’t fold. Manitoba didn’t fold. Good teams are resilient and find a way.”

Yantz, who finished the game 23-of-36 for 371 yards, with four touchdowns and two interceptions, spoke of the team’s determination when they were down midway through the second half.

“We had a little chat on the sidelines, and said, ‘you know we can’t wait for someone to start making plays. We gotta do it together, do it yourself.’ Everybody just started rising up.”

Demski, who finished with seven receptions for 115 yards and three huge touchdowns, tried to explain his fourth quarter surge:

“I told Smitty [Andrew Smith] I just needed to get hit hard and that happened in the second half and I woke up.”

Manitoba will now travel to take on the third-ranked Calgary Dinos in the Hardy Cup. The  winner will represent Canada West in the Mitchell Bowl on Nov. 16 against either the Western Mustangs or the Queen’s Gaels of the Ontario University Athletics conference. The Hardy Cup kicks off in Calgary Saturday at 3 p.m. The game will be broadcast live on Shaw TV.