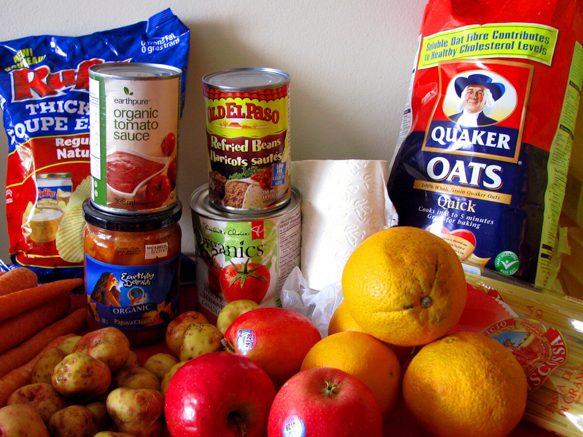 A recent study conducted by Meal Exchange, a charity aimed at tackling food problems on post-secondary campuses, revealed that food insecurity was a serious issue faced by a large portion of students at Canadian post-secondary institutions.

The study, titled “Hungry for Knowledge,” surveyed over 4,000 students from five Canadian universities and is the first of its kind in the country.

According to Meal Exchange, the study was motivated by the failure of existing reports to address the urgency of food insecurity among post-secondary students.

The survey revealed that nearly 40 per cent of students experience moderate to severe food insecurity. Twenty-five per cent said this affected their physical health and 20 per cent reported it negatively affected their mental health.

Dalhousie and Lakehead students reported the greatest food insecurity. The universities were selected due to their geographic location and regional differences.

The report examined how the insecurity can be driven by factors including a lack of money for food – especially healthy foods. Students surveyed reported skipping meals to prolong available food and admitted to worrying they might lack access to acceptable food in the future.

The high cost of tuition and housing, as well as limited finances, were the most reported contributors to food insecurity among surveyed students.

Meal Exchange program coordinator Merryn Maynard said that despite the many students who were food-insecure, few made use of food banks.

“Of all food-insecure students, only 16.8 per cent reported that they had accessed a food bank, which reflects trends in other food-insecure Canadian populations,” she said. “This demonstrates that a fraction of people experiencing food insecurity access food banks.”

Maynard said this discrepancy, which was most common amongst African, Aboriginal, and Caribbean students – the most food-insecure groups – was caused by difficulty in accessing traditional foods.

Meal Exchange has plans to expand its research to other Canadian institutions and to conduct intermittent national surveys relating to food and housing security, as well as other constraints students face in accessing post-secondary education.

The charity also hopes to increase government support in providing steady financial subsidies to students and other vulnerable populations, as well as establishing truth and reconciliation initiatives aimed at understanding and reducing food insecurity among Aboriginal students.

U of M food insecurity

Tori Sutyla , food bank coordinator at the University of Manitoba, agreed with the study’s findings. Sutyla noted that over the years, the majority of food bank users have been international students.

“We do have a high population of international students that use the food bank,” she said.

She added that the high number of international students using food bank services may be attributed to the lack of support from family members or other close relations.

“If you’re from another country and you do not have any family to fall back on, I could see how that would be an issue,” she said. “If you have family, you can always go to them for help. But if you’re here all by yourself, then that could be challenging.”

However, Sutyla added that the same could be said for students from other cities or provinces, rural students, and even students who have lived in the province their entire life but lack these supports. She added that graduate students, as well as single parents, are also regular users of the food bank.

“Because grad school is expensive, and you don’t always get paid that much, you could be affected,” she said. “We do also have a lot of people that have kids and are trying to make ends meet.”

The U of M food bank is modeled after Winnipeg Harvest and is available to all registered U of M students, both full-time and part-time.

Sutyla also said the amount of food provided depends largely on the number of dependents a student has.

“Unfortunately, we can’t feed people with too many dependents, so we limit the number of dependents to three at most,” she said.

Sutyla said that the number of students who use the food bank has remained relatively stagnant since its inception.

When the food bank previously stocked foods such as fresh fruits, frozen milk, and bread, usage was at an all-time high but Sutyla chalked that up to user abuse.

“Due to budgeting, we weren’t able to continue offering that, and students were abusing the services because of these foods,” she said. “I think our use went down in a sense because people aren’t abusing the food bank anymore but our usage hasn’t really gone down that much since then.”

Sutyla also noted that use is seasonal.

“If tuition’s due or Christmas is coming up, we see higher numbers,” she said. “During the summer, we see lower numbers because there’s less people in class.”

“Use also varies from month to month,” she said. “In January and September, at the start of the school year, we see so many students. During exams, use also goes up because people aren’t working as much and they’re studying more.”

The philosophy of love