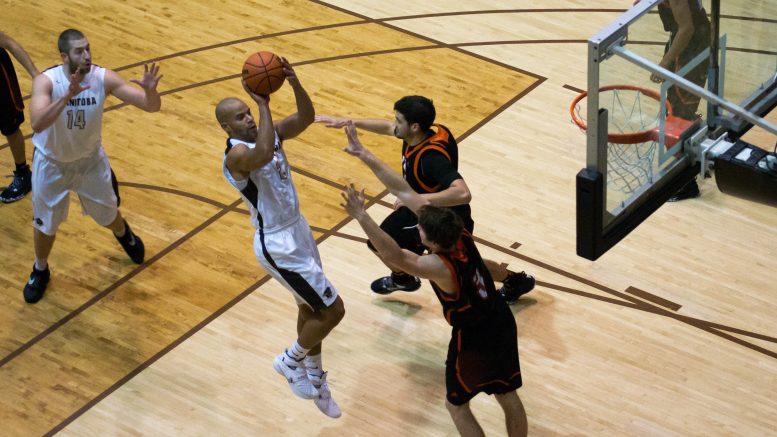 On Friday, the University of Manitoba men’s basketball team defeated the Thompson Rivers Wolf Pack 90-68 in their season home opener. With the win, the herd are back in the win column and improve to 2-1 on the season. The Wolf Pack fall to 0-3 in early Canada West division play.

Keith Omoerah was huge for the home side, and scored a team-high 20 points. Captains AJ Basi and Justus Alleyn were held to a combined nine points in the first half. Omoerah kept his team close, and let the captains take over in the second half en route to their victory.

“He’s so valuable for our team and what we’re trying to do,” Basi said of Omoerah. “He doesn’t need to lead us in scoring every night, but sometimes he does. Offensively and defensively he’s huge.”

Shots just did not seem to fall for the Bisons captain in the first half, but Basi knew they just had to stick to their game.

“It was just a matter of staying patient; we were going to get our looks eventually” said Basi. “We missed a few shots, me and Justus, but we got it going after.”

The Bisons got off to a slow start, as they shot just over 26 per cent in the opening quarter. The Wolf Pack took advantage of Manitoba’s missed shots, and had a 20-15 lead into the second quarter. The Bisons improved in the second; they capped it off with a 6-0-run to take a 38-36 lead into halftime.

Both teams put up 24 points in the third quarter, with a lot of back and forth play in the frame. The Bisons held on to their slim lead and took a two-point lead into the final quarter. The herd started the fourth with a 16-1 run and ran with a 78-61 lead midway through the frame. Manitoba’s big lead rooted from captains Basi and Alleyn combined 20 points in the second half, as they led to the Bisons win.

Manitoba and Thompson Rivers will tip off their second game of the weekend on Saturday, at 6 p.m. as the herd finishes their home opener series at the Investors Group Athletic Centre.

Bisons drop games to Cascades and Spartans in women’s soccer