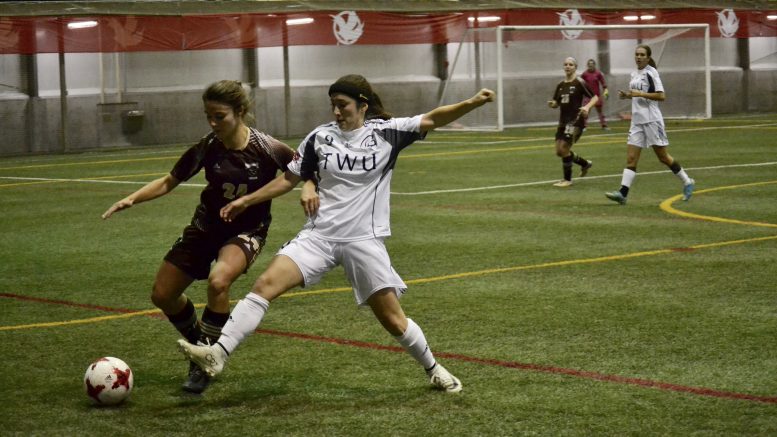 Thursday was the opening day of the U SPORTS women’s soccer national championship hosted by the University of Manitoba. With the temperatures well below freezing and plenty of snow on the ground, the tournament was moved inside to the Subway Soccer South Complex.

The day started off with an upset when the Western University Mustangs surprised the reigning champions, Laval University Rouge et Or. The Atlantic champs, the Cape Breton University Capers, defeated Canada West finalists the University Victoria Vikes in game two.

The third game of the day needed extra time and Mégane Sauvé played the hero for the University of Montreal Carabins in a 1-0 victory over OUA champions the University of Guelph Gryphons. The fourth quarterfinal pitted the host Bisons against Canada West champions, the Trinity Western University Spartans. The Spartans ran away 4-0 winners after an explosive second half.

Laval came into this tournament heavy favourites to repeat their feat from a year ago, but Kendra Marlatt of the Mustangs put an end to their hopes in the 85th minute. Marlatt got onto the end of a Giulia Geraci ball and managed chip a cheating Marie-Joelle Vandal.

Laval largely dominated the first half, earning a few chances, but were unable to capitalize. Western gained its footing in the second half and pushed back, eventually rewarded with Marlatt’s first goal of the tournament.

“I think we came in a little scared, I’d say,” said Marlatt post game. “There was a lot of hype around the Laval team so we came a little scared. The second half we realized we’re just as good as them and came out harder.”

It was the east coast versus the west coast in the second quarterfinal, and chalk up a victory for Notorious B.I.G. and the east coast as the Capers held on to win 2-1. After no score in the first half, Fatou Ndiaye capitalized on a funny bounce to give the Capers the lead in the 50th minute.

Cape Breton doubled their lead 12 minutes later off a Ciera Disipio effort from outside the 18-yard box.

“It was on my left foot so I tried to kind of cut it across my body and I just tried to get my body over the ball with my right foot because the keeper is very tall and it kind of snuck in underneath her,” Disipio said of her goal.

The Vikes managed to pull one back via Victoria Wulff in the 85th minute but it was not enough, and the Capers went through to the semi-finals.

The Guelph Gryphons, champions of the OUA came into the game as favourites over the RSEQ finalists, the Montreal Carabins. But it was the Carabins who came out on top at the very last moment.

This game waited until the 120th minute to give the raucous fans at the Subway Soccer South Complex a goal. It was Sauvé who played the part of hero, dashing through the Gryphons backline and slotting home in the bottom left to give the Carabins a 1-0 victory.

“I don’t think at any point did we stop believing and had to keep going and it seemed like there was a force field around the net, but it took a moment of brilliance really to unlock it,” said head coach Kevin McConnell after the game.

The day was finished off with the hosts playing the Canada West champion Spartans, and the Bisons held their own. The first half, with the crowd behind them, Manitoba pressured early and were able to generate a few chances.

After half time, however, the Spartans appeared to wakeup, and led by Rachel Hutchinson’s two goals, were able to come away 4-0 winners.

“It’s always hard to play the home team, they definitely had that advantage and their fans were awesome towards them,” Hutchinson said. “We play teams like that all the time where they have the home crowd and we just half to focus on our game and growing as a collective whole.”

Bison head coach Vanessa Martinez Lagunas said she was proud of her team’s effort against the powerhouse Spartans.

“The game would’ve been really different had we scored in the first half, in the second half, credit to them, they’re a really good team and they had one chance and they put it in and kept going and going,” she said.

“We still have a really young squad, they still have to learn lots of things especially in terms of experience and not to get down after a goal.”

Today the consolation semi-finals take place with Laval playing Victoria at 1 p.m. and Guelph playing Manitoba at 4 p.m. Both games will be held at the Subway Soccer South Complex.

Graca grinds it out